Go loud or go quiet? Set a trap or use your environment? Pick ‘em off or last stand? The power of player choice informed every design decision in the making of Desperados III. The team at Mimimi Games, creators of the critically acclaimed Shadow Tactics, set out  to deliver a stealth-oriented, real-time tactics game that empowered the player to tame the wild west their way – or several different ways – depending on the choices they make as John Cooper, leader of an eclectic gang of five.

Desperados III is a story-driven experience set across the ruthless wild west in 1875. John Cooper’s gang is a colorful cast of characters including legendary bounty hunter Doc McCoy, the beautiful and enticing Kate O’Hara, large-scale trapper Hector Mendoza, and voodoo master Isabelle Moreau. If these characters have one thing in common it’s their clever and calculated approach to getting the job done.

They’re on a quest to put a halt to the ongoing illegal activities of a Railroad Company and its henchmen. John Cooper’s gang of five is even called upon to support a U.S. Marshal on several missions. The gang’s adventures take them from rural Colorado towns, over swamps and riverbanks in Louisiana, and finally to a dramatic finale in Mexico. Even with this resourceful gang, getting outnumbered will happen, as will getting outgunned. After all, this is the wild west.

Desperados III is available now for Xbox One on the Microsoft Store. Thanks to the power of player choice, John, Doc, Kate, Hector and Isabelle will never run out of new ideas. But be careful! There’s more than one way to lead a gang in the west…but there’s also more than one way to die! 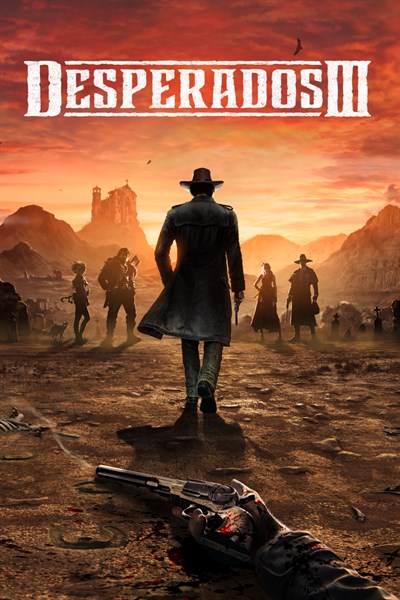 ☆☆☆☆☆ 4
★★★★★
$59.99
Get it now
Free Trial
Desperados III is a story-driven, hardcore tactical stealth game, set in a ruthless Wild West scenario. Play smart if you want to succeed. A good plan can make the difference between survival and finding yourself at the business end of a pistol. In this long-awaited prequel to the beloved classic Desperados: Wanted Dead or Alive, John Cooper will join forces with the runaway bride Kate, the shady hitman Doc McCoy, the giant trapper Hector, and Isabelle, a mysterious lady from New Orleans. On Cooper’s quest for redemption, his adventures lead him and his gang from rural towns, over swamps and riverbanks, and finally to a dramatic showdown worthy of Wild West legends. Drifter, gunslinger, and natural leader Cooper can kill quietly with a knife, or take out multiple foes with his revolvers. Strongman Hector carries a giant bear trap and can slay the toughest opponents with his trusty axe. Cold blooded bounty hunter McCoy likes to be methodical, using lures, knockout gas, poison syringes and a custom long-range pistol. Kate can fool almost any man with the right outfit, and kills discreetly with her hidden gun. And then there is this mysterious woman from New Orleans, Isabelle… Combine your team’s special skills to overcome each tough challenge in your own style. Plan your moves wisely and execute them perfectly in real time to sneak past your enemies while remaining undetected.

Related:
The Multi-Biographical Welcome to Elk is Coming Soon to Xbox One
Embrace Your Inner Evil! Dungeons 3 – Complete Collection is Coming to Xbox One June 26
5 Tips to Help You Deal Even More Destruction in Project Warlock