Go Barrel Rolling for Bounties in Skycadia, Available Now on Xbox One | Blogdot.tv

Skycadia is a fast-paced arcade dogfighting game where you compete to collect the highest bounty in a colorful, pixelated world. It’s been percolating for several years, going through many different iterations, and it’s finally ready for you to enjoy.

I’m a full-time instructor of Game Development at a community college in the Midwest, married father of 4, and I’ve spent the last 15 years in professional game development, from co-founding two indie game studios, to working at large companies as an artist and senior game designer. Throughout my career I’ve had the fortune to share my passion for game development with hundreds of students and mentees.

The earliest idea I had for Skycadia was a mix of the depth of Mount & Blade with the arcade gameplay of Starfox. After creating a simple prototype flying around shooting enemies with colorful spacey visuals, I felt I was on to something interesting. I started adding things to do between combat, navigating a world map with item shops and enemies, but after playtesting it was clear that the real fun was to focus on the frenetic flying and shooting.

After getting the game playable enough to show to other people, I brought a build to the Game Developers Conference in San Francisco and pitched it to the awesome team at Microsoft. I was nervous, but they were encouraging and liked the concept, so they gave me the go-ahead to develop Skycadia for Xbox One. It was a dream come true to be developing my own game for a major console!

A former student, McGuire Leiting, very graciously agreed to help me finish the game by contributing his art skills, so we started brainstorming how to take what I’d already done and polish it into a complete package. We had a lot of ideas, but we focused on arcade action and the high score chase. McGuire developed the distinct visual style that it has today to reinforce the vibe of the game. He also kept me on track to finally finish the project!

As a life-long game developer, I’ve been playing and making games for many years, but this is my first major console release of a personal project. I can’t wait for you to get your hands on Skycadia and let me know what you think. Feel free to message me on Twitter with your feedback, and I look forward to seeing your high scores above mine on the leaderboards. 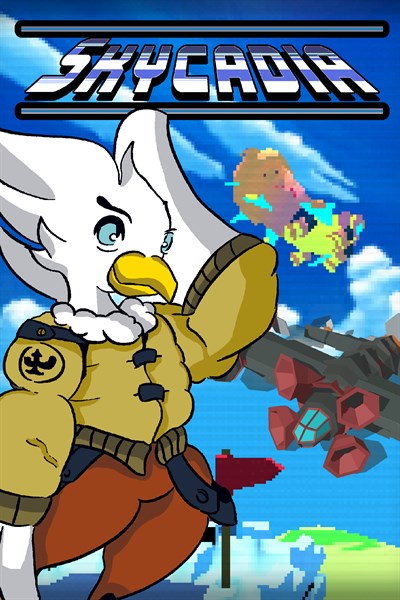 ☆☆☆☆☆
★★★★★
$9.99
Get it now
Xbox One X Enhanced
The world of Skycadia is overrun with sky pirates — and there's profit to be made! Take to the skies and collect bounties by shooting down the scoundrels in this light-hearted flying adventure.