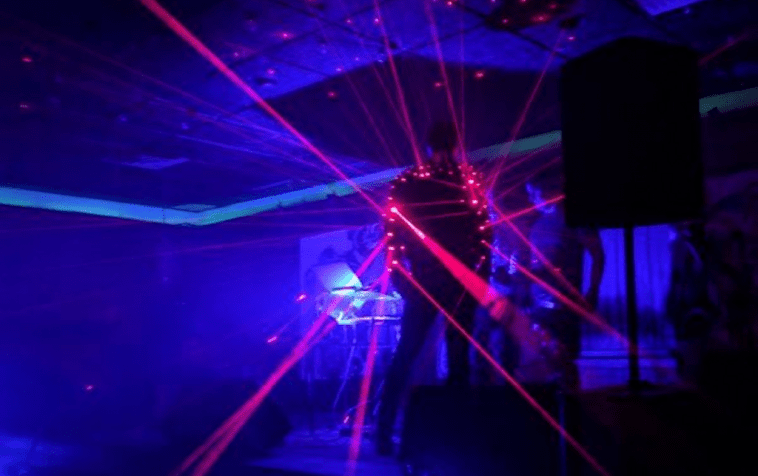 Go all cyberpunk with this laser-spiked jacket!

Your leather jacket might look cool, but one thing it’s missing—unless you’re maker “abetusk” or perhaps a Japanese musician—is lasers!

After seeing Yoshii Kazuya’s laser-spiked outfit, ‘tusk decided to create an excellent version of the getup by embedding 128 laser diodes embedded in his own jacket. These lasers are powered by an Arduino Nano, along with a pair of I2C PWM output boards, allowing them to be switched in sets of four.

The lasers can be controlled either by joystick, via a microphone in order to react to sound, or in a looping ‘twinkle’ pattern.

More information on the project is available in this write-up as well as on GitHub, which includes Arduino code and other files needed to build your own.

After seeing Wei Chieh Shi’s laser jacket design, I wanted to create my own. These instructions show how to modify a jacket to add laser diodes and control them electronically to produce different laser light patterns. The laser diodes give the jacket an appearance of being “spiky”, like having metal spikes but with red laser light. The effect is especially striking in environments with fog or smoke as the laser light path shows a trail from where it originates.

The concept and execution is relatively simple but care has to be taken to make sure that the electronics, wiring and other aspects of the jacket don’t fail when in use. Much of the subtlety and complexity of the project is providing proper wire routing and making sure that strain relief for the electronics and connections is provided so that it’s resilient under normal wear.

Assuming the basic parts are available (soldering iron, multimeter, wire strippers, laser cutter, etc.) I would estimate that this project is about $300 in raw materials and about 20 hours worth of labor.

Depending on the battery used, the jacket can operate for about an hour or two continuously. Spare batteries can be carried around and used to replace the depleted batteries if need be.