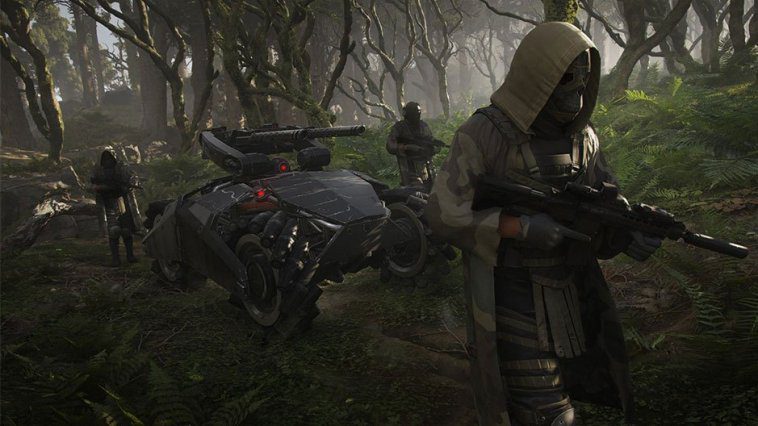 As we near the October 4 release of Ghost Recon Breakpoint, it’s worth looking back at the tremendous support Ubisoft has given to its predecessor, Ghost Recon Wildlands. Since its initial release in March 2017, we’ve seen new story content, Xbox One X enhancements, and in October of 2017, the addition of multiplayer to an absurdly expansive campaign, dubbed Ghost War. Heck, the last Wildlands update just arrived on Xbox One *checks calendar* only a month ago!

As announced this week on Inside Xbox, multiplayer will be part of Ghost Recon Breakpoint from the start. At gamescom, Ubisoft not only lifted the veil on this new Ghost War, they put it into our hands. As eight of us got comfortable and checked our settings (invert Y-axis, check!), we were advised that the Ubisoft’s goal is to put us ‘in the boots of the Ghosts.” As I quickly found out, that is some dangerous footwear to strap in to.

A bit about where Ghost War sits in the Ghost Recon Breakpoint package: Ubisoft is taking great pains to keep things more consistent between campaign and PvP this time around. You’ll find the same specializations from the campaign in PvP; simply select from Assault, Sharpshooter, Field Medic, or Panther (think stealth class) at the beginning of each round. No matter if you’re playing campaign solo, PvE co-op, or PvP, you’re sharing progression for your character. Play what and how you like, and you’ll consistently progress.

So how do Ghost War matches play out? This isn’t the type of multiplayer shooter where you’ll be sprinting full speed towards an enemy, who, in turn, charges right back at you attempting to land more hits. The winner in most situations will be the player who is better at detecting their adversary, whether through skillful use of drones, a great vantage point, or a helpful ping (ADS + A button press) from your teammate. Most of my kills came without a return shot coming in my direction, and most of my deaths were equally one-sided affairs. I was exposed or became complacent, and then I was down and crying out for a rez.

Over several best-of-3 matches, it became clear that Breakpoint‘s Ghost War is far more about teamwork and effective communication than straight up aiming skills. In the matches in which we broke into pairs, stayed together, utilized the ping system to cross our language barrier (it *is* gamescom), we usually won. When someone was overly bold, or more likely too cautious and hanging back, their partner was quickly isolated, eliminated, and the rest of us followed in short order.

A few things kept Ghost War from bogging down in the wet, wet mud. A surveillance system is placed equidistantly from both teams on the map and activates after about a minute. If one team claims this point, all enemies’ locations are revealed on the minimap. Additionally, whenever you’re spotted by an enemy, the game lets you know. That proved to be a great incentive to keep moving – assuming your enemy missed their first shot.

While Ubisoft doesn’t use the term directly, with one life, randomized loot (but set loadouts), and an encroaching storm, the mode showed at gamescom felt like a tactical, extremely tense, small-scale Battle Royale. When you’re taken out, it hurts; shouts of desperation filled the room when one of us took a hit and became a spectator. However, you don’t have to just sit there while you’re awaiting a resuscitation; downed players can spectate their fellow surviving teammates, and even utilize the ping system to help them out.

One of the most interesting elements is that maps have variants taking place at different times of day or under different weather conditions. Our first bout took place on the Skell Port map. It was sufficiently portlike: filled with crates, piles of lumber, cranes, and infinite places for stealthy enemies to hide. Later on, we returned to Skell Port, this time at night and in a driving thunderstorm. These rounds played out more slowly, as visibility was significantly lower, and encounters took place at much closer quarters.

Ubisoft promises two different Ghost War modes across six changeable maps when Ghost Recon Breakpoint ships on October 4th. If you fall in with a great squad in the campaign and think that nothing can stop you, I highly recommend you accept Ubi’s invitation to “step into the boots of a Ghost” in PvP to see how good you really are.