Hello there! I’m here to welcome you to the 1st Anniversary of Generation Zero! To celebrate, we’ve updated the game with a bunch of new features that we hope you’ll enjoy.

What is Generation Zero?

Quickly, a little about the game for those of you who are joining us for the first time. Set in an alternative 1980s Sweden in the region of Östertörn, Generation Zero is about exploring atmospheric and mysterious environments while also engaging in first person guerrilla action against hostile machine invaders. All the while you are trying to understand where they originated from, what their purpose is, and where the local population has disappeared off to, while simultaneously scavenging for weapons and equipment to fight them back.

In general, there are a few goals with the Anniversary Update: add new gameplay features as well as celebrate all our players, whether you’re just joining us or have been with us for a while. We’ll outline the main features in just a second, but it’s worth mentioning that these features, like others we’ve created, were put together based on player feedback. While not every idea from the community makes it into the game, we strive to pull out ones that we think will help improve the experience for everyone while also aligning with the ideas and goals that we as developers have for the game. With that said, let’s dig into those details!

The first exciting addition to the game that we’d like to talk about is the introduction of crafting as a feature! In this update, we’re rolling out the first iteration of the crafting system which allows you to add bonus stats to any of the apparel that you own. This means that instead of hoping for a randomly dropped apparel item to have a bonus stat on it, you can now apply a bonus to your favorite apparel pieces! There are a variety of potential bonuses you can imbue your clothing with, including bullet damage resistance or a noise reduction bonus. You’ll have to gather the appropriate materials though, which can be found throughout the world such as inside houses, in containers, recycled from existing items in your inventory, or dropped from the machines you find yourself battling. So, start hunting for these new items to make yourself even more of a threat to the Machines!

Speaking of threats, we know that there are a wide variety of players out there that enjoy games in different ways. Some of those ways relate to how challenging a game can be. For certain players, they like to push themselves to beat overwhelming odds while others, like myself, prefer to enjoy the story and not have to worry too much about the combat challenge. With this update, we are giving you the ability to choose that difficulty level for yourself , as well as decide if you’d like the difficulty level to scale with the number of players in your game. This means you’ll have multiple ways to tailor your experience, whether you are alone or teaming up with friends!

We’ve come a long way since the launch of Generation Zero and we wouldn’t be here if it wasn’t for our fans. Your feedback inspires us and pushes us to do better every day. So, thank you for joining us in Östertörn and thank you for a great first year! We hope you continue to join us for the rest of 2020! 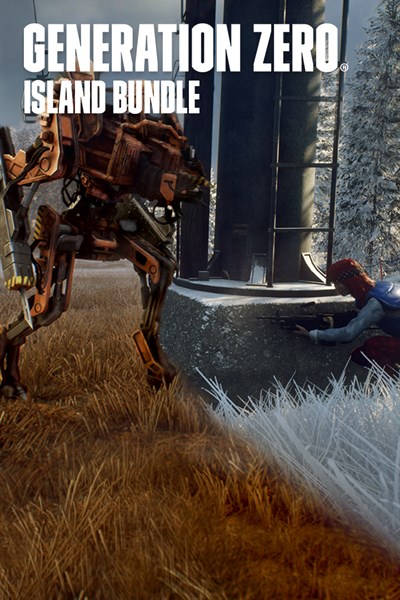 ☆☆☆☆☆ 137
★★★★★
$34.99
Get it now
Generation Zero – Island Bundle includes the base game as well as the Alpine Unrest expansion, allowing you to explore the original area of Östertörn as well as the new island of Himfjäll. Try to uncover the secrets of the hostile machines, find weapons and equipment that you can use to survive, and avoid the watchful gaze of the enemy for as long as you can. GENERATION ZERO Generation Zero is an atmospheric first-person guerilla tactical warfare game set in an alternative 1980s Sweden, in a region called Östertörn. The population of this peaceful rural setting vanished overnight, replaced by hostile machines who seem intent on killing anyone they meet. You set out into the vast open world, stumbling upon villages, bunkers, military installations and more, as you seek to uncover where these machines came from. During your travels, you find plenty of tools to help you in your encounters with this new enemy, including equipment to distract them and weapons to try your best to take them down. Additionally you have various skill trees that allow you to cater your abilities to better handle dangerous situations, and outfits to create your ultimate 80s fighter. If you ever feel that you need backup, you can always invite 1-3 friends to join you in your efforts. ALPINE UNREST A month has passed since the events of the main game, and your search has led you to Himfjäll, an island off the east coast of Östertörn. Formerly a popular vacation spot for its towns, cafés, shops, and ski slopes, the island now stands abandoned. At the massive ski hotel Björntunet, you’ll find something invaluable – a small community of survivors who have managed to stay alive despite chaos outside. Their situation is far from good though, as the enemy is constantly on the lookout, making it next to impossible to leave their hotel hideout. While the situation on Himfjäll is slightly more positive given the addition of new allies, you’ve unfortunately encountered a new tier of machines – Apocalypse Class. Much deadlier than their counterparts you have stumbled upon in the past, they seem designed to hunt down those who are left, overpowering any who try to fight back. Their weapons are horrible creations, including things like biochemical machine guns and flamethrowers. Even the mainland of Östertörn has become more unsafe, as these machines have started making their way there. Hopefully the new machine guns you’ve found during your exploration will be enough to take them down.

Related:
Free Play Days – F1 2019 and Warhammer: Chaosbane
Unleash Your Need to Create: Space Engineers is Available Now on Xbox One
Vampire: The Masquerade – Coteries of New York Now Available on Xbox One