In case you missed it, we’ve had a lot of updates and news for Gears 5 – Free Play Days, Batista, and Operation 3 Gridiron. Let’s jump in!

Welcome to Gears 5 – Operation 3: Gridiron! Get in on this single life objective mode with two teams fighting to run a neutral flag into their opponent’s end zone. Race to be the first team to hit 13 points to win, where you and your team fight to seize the flag, control weapons, and key positions in each short two-minute round. You’re going to need to work tactically together to claim each win! More details on Gridiron can be found here on Xbox Wire.

Also: Batista is back! Play now through April 20 and you’ll automatically receive the Batista Bomb execution and Batista skin in-game!

Don’t have Gears 5? No problem. It’s easy to get in on Operation 3: Gridiron, because Gears 5 is part of Free Play Days starting today, April 6 through April 12. All Xbox Live Gold or Xbox Game Pass Ultimate members can play Gears 5 online with their Gold friends during Xbox Free Play Days! Console, Windows 10 PC, and Steam — everyone can play together.

We’re all in this together. Let’s get in some game time with our friends and jump in! 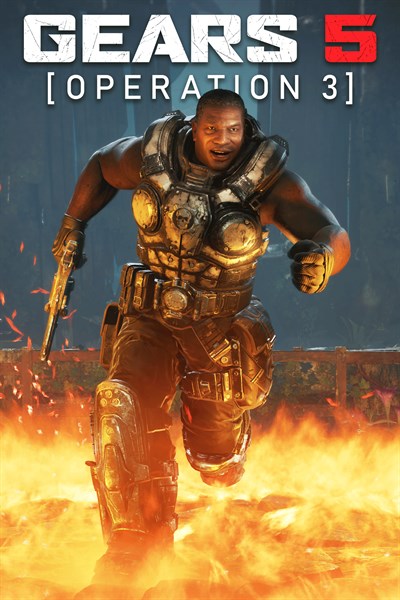 ☆☆☆☆☆ 2054
★★★★★
$59.99 $29.99
Get it now
Xbox One X Enhanced
PC Game Pass
Ultimate Game Pass
Xbox Game Pass
From one of gaming’s most acclaimed sagas, Gears is bigger than ever, with five thrilling modes and the deepest campaign yet.* Campaign: The world is crumbling. The Swarm has corrupted the Coalition’s robot army and is descending upon human cities. With danger closing in, Kait Diaz breaks away to uncover her connection to the enemy and discovers the true danger to Sera – herself. Escape: Outrun the bomb, outsmart the Swarm, and escape the Hive! Escape is a new, aggressive, high-stakes co-op mode featuring a three-player suicide squad that must work together to take out enemy hives from within. Versus: May the best team win! Rack up points and trade up for superior weapons in Arcade, a frenetic playlist built for jump-in, over-the-top fun. With ten other game types plus new and classic maps, Versus rewards every competitive style, from casual to pro. Horde: Can you and four friends endure waves of ever-stronger enemies and bosses? Survive using new hero abilities, building defenses, collecting power, leveling up your skills and working as a team. Map Builder: Create custom Escape hive maps and experiences to share with and challenge your friends. Features: • Three-player Campaign Co-op: Battle alongside your friends in three-player online or split-screen co-op. • Tours of Duty: Rank up from new recruit to four-star general in Gears Tours of Duty. Take on new and exciting challenges, earn awesome rewards, and show off your loot. • Boot Camp: New to Gears or just a little rusty? Bootcamp is a fun way to learn the ropes, from the basics to advanced combat techniques. • Play as Jack: Play as Jack, your personal flying support bot that can protect allies and damage enemies – perfect for players new to Gears. • Visual Showcase: Play every mode in 4K and HDR at a smooth 60 frames per second on Xbox One X. Accessibility: Customize your gaming experience with updated accessibility features, including: full controller remapping, single stick movement, Adaptive Controller support, narrated UI and menus, improved subtitles and more. *Some modes including Escape, Versus and Horde, and online multiplayer require Xbox Live Gold on console, membership sold separately.

Related:
Inside Xbox Returns Tuesday with Grounded and More
This Week on Xbox: April 3, 2020
HyperParasite: 80s Kids Make Their Dream Game in 2020