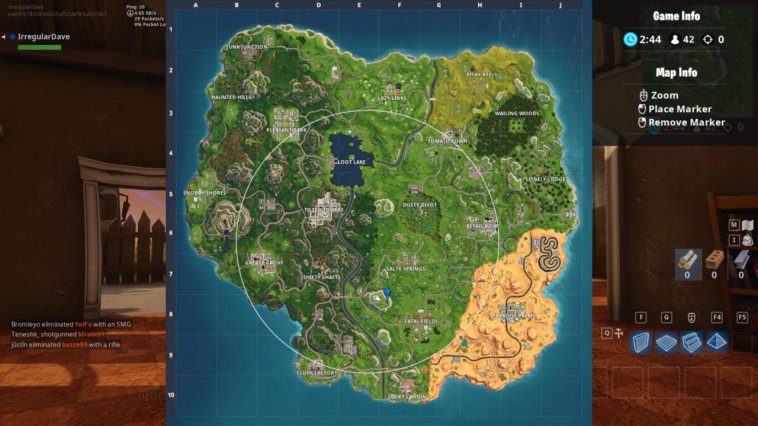 Fortnite: Battle Royale Season 5 is ongoing, which means Epic Games has offered up numerous sets of weekly challenges for players to complete on PS4, Xbox One, PC, Nintendo Switch, and mobile. As with others weeks in Season 5, the Week 3 challenges are split into two categories, with some being available to everyone while others are only accessible for those with this season’s Battle Pass.

On the free side, this week’s challenges involve dealing 500 damage to opponents in a single match, using a launch pad, and following the treasure map found in Flush Factory. While the first two shouldn’t give you much trouble, the third of the bunch will require a little bit of legwork. Flush Factory can be found in the southern part of the island and it’s there that you’ll find the treasure map.

However, you aren’t actually required to get the map first. Instead you can skip this bit and go to quadrant F8 of the map, where you’ll find a house on a hilltop. If you’re looking at the house head-on, the Star you need to collect will be on the right of the path leading up to the house. Although gliding onto the spot from the Battle Bus is the easiest way to get to it, you can also build your way up. Take a look below to see the location on the map or watch the video above to see us do it.

For those with a Battle Pass, you’ll need to search seven chests in Fatal Fields, shoot a Clay Pigeon at five different locations, eliminate five enemies in Haunted Hills, and then get three eliminations using an explosive weapon. You’ll also get 5K worth of XP for doing completing all of these challenges. If you need help hunting them down, check out our Clay Pigeons location guide. You can also find all of Fortnite Season 5, Week 3’s challenges, along with their rewards, below.

Fortnite continues to expand in a variety of ways. A recent update added the Heavy Sniper Rifle, while more and more challenges continue to roll out. Meanwhile, the long wait for an Android version has at least partially ended, with an invite-only beta bringing more and more players in.