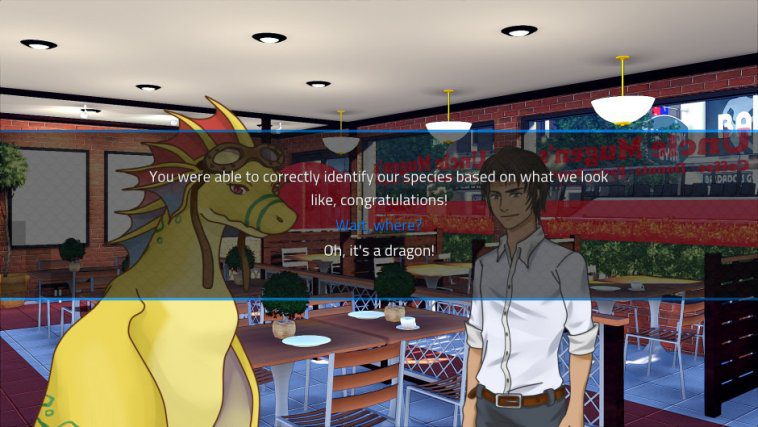 Angels with Scaly Wings follows the story of the player travelling to the dragon world as an ambassador. But things get complicated and suddenly you’re thrust in the middle of a murder investigation.

Dragon society is complicated! While this new world may seem strangely familiar, it also operates under its own rules. Yet every discovery only seems to raise more questions than it answers… which brings us to the next point.

Plenty of mysteries await you in this visual novel! As the player character, you will have to wear many hats in order to succeed, from solving mysteries, investigating crime scenes, to finding out the true nature of this world, as well as negotiating with a different culture.

3. It takes your choices seriously.

In Angels with Scaly Wings, there are no wrong choices. There may be answers that look better from a certain angle than others, though! But as a game without dead ends you better think twice as your choices will follow you until the story’s conclusion and can even alter the world.

4. Yes, you can romance some of the characters.

If you want to. You don’t have to. It’s perfectly fine to just play through the game without any of that.

5. The main character is a blank slate.

While players can enjoy the nuanced characters, interesting conversations, the unique narrative and the big impacts of the story, we also worked hard on making the main character feel right. However, we found this meant saying just enough to make the plot work, but as little as possible otherwise. As the player character is never seen, this means players have the freedom to immerse themselves in the story however they like.

Have we piqued your interest? Find out what happens to the dragon world when Angels with Scaly Wings launches today on Xbox Series X|S and Xbox One!

☆☆☆☆☆ 2
★★★★★
$9.99 $7.99
Get it now
After the discovery of a mysterious portal, you are selected as one of the few humans to travel to the world of dragons. While you serve as an ambassador, you learn more about this strangely familiar place, and discover that your human colleague knows more than he’s letting on… It will be up to you and the friends you make to uncover the conspiracy that threatens the newly discovered world. In the process, you may even find love. Features: * Epic, mind-bending story with 175,000 words * Cultivate friendships (or maybe more) with dragons including 5+ character routes. * Make meaningful decisions that affect the story with more than 13 unique endings. * Unlock exclusive images of the main cast. * Solve crimes and uncover the secrets of the world of dragons.

Related:
Boris the Rocket is Now Available on Xbox One
Second Extinction (Game Preview): What to Know Before Taking Earth Back from Mutated Dinosaurs
Fight Your Friends in the Fast-Paced Shooter Cymatically Muffed