This month, the open-world hunting game theHunter: Call of the Wild turns four years old. As luck would have it, we’re able to celebrate this with the release of the 9th reserve today for Xbox One titled Te Awaroa National Park. Today, we’re joined by Product Owner at Expansive Worlds Sacha Karsenty, to talk about some of the team’s inspiration and thoughts behind the new reserve, and his best advice for players jumping in for the first time.

Expansive Worlds Product Owner Sacha Karsenty: Following the release of our previous reserve, Silver Ridge Peaks, which was inspired by the Rocky Mountains in North America, we wanted to bring players to a part of the world that had yet to be explored in the game. With Te Awaroa National Park, we’re taking the hunt to a reserve inspired by the beautiful South Island of New Zealand. We’ve added four new species to the animal roster, a powerful new rifle, and 16 story missions for hunters to complete.

Carlström: What were some of the inspirations behind Te Awaroa National Park?

Karsenty: During our now four years with theHunter: Call of the Wild, the story has become a crucial part of making the experience even more believable and immersive. For Te Awaroa National Park, the team took a lot of inspiration from New Zealand’s real-life hunting history. In particular, the daring escapades of the hunters who tracked down and captured deer from helicopters for the commercial venison industry, as well as the mystery that surrounds the vast, empty South Island bush.

New Zealand is also one of the only places in the world where virtually all game animals are invasive species. This helped us emphasise the value of hunting as a means of preserving New Zealand’s biodiversity, which the warden – the reserve’s overseer – champions throughout the storyline

Carlström: The reserve has quite a few references to films, including an accessible movie set with green screens. Were movies a big inspiration for the team during development?

Karsenty: Funny you mention that! We’re huge movie fans, so we couldn’t resist the urge to include a few nods here and there, especially to a certain movie series about a precious ring… Jokes aside, we decided early on that we wanted to do a bit of a mix of the fantastical and the real, and have the narrative centre around the after-effects of a movie being filmed there. Our world designer and artists were able to really bring that to life with some superb locations and set-pieces.

Carlström: The reserve features a lot of landmarks and environmental props for players to discover. How do you decide on what to put into the game?

Karsenty: We got a lot of help from our Kiwi Community Manager Mat, who’s also experienced in hunting, but it’s a collaborative process where the whole team comes together to contribute with ideas. When we know what location we’re going for, we start looking at real-life objects that exist there, such as the architecture and what materials it uses.

We also research historical events that we think can be fun or interesting to reference in the game, such as the crashed helicopter that hunters used for venison hunting. Based on that, we then create things like props, buildings, and structures that emphasise the level of realism we are striving for.

Carlström: Which animal species are available in the reserve?

Karsenty: We’ve done eight reserves before, featuring animals such as Lions, Gray Wolves, Grizzly Bears and Cape Buffalos, but it was just as fun to pick the animals this time. In this reserve, there are eight species available, four of which are new additions. A big one is the Sika Deer, which had long been requested by our community. The Feral Pigs and Feral Goats are also fun to hunt. Other species you can find are Chamois, Red Deer, Turkey, European Rabbits and Fallow Deer.

Carlström: What advice would you give someone who’s jumping into the game for the first time?

Karsenty: If it’s your first time ever playing the game, I’ll give the same advice I give to everyone – stop running, it scares away the animals just like in real life! We understand that the game can be overwhelming at first, even if you’re a seasoned gamer, so we’ve tried making the introduction in each reserve as intuitive as possible. It might be comforting to know that theHunter: Call of the Wild isn’t a pure simulation game, but rather a game that focuses on immersion.

It’s also good to keep in mind that each animal species requires a different hunting approach. Personally, I really like hunting the Chamois, as they look so cool! Outside of the core hunting experience, I would say make sure to explore the reserve and find all the props and landmarks. That’s something I enjoy a lot! 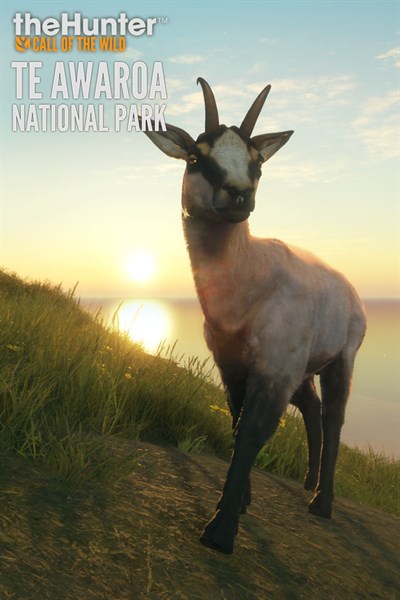 ☆☆☆☆☆ 10
★★★★★
$7.99
Get it now
There’s something truly magical about Te Awaroa National Park, something that has captured the imagination of movie directors and hunters alike for generations. Rolling hills, temperate rainforests, and deciduous forests combine to create a microcosm of the entire South Island of New Zealand. Watch the landscape shift before your very eyes as you trek across this beautiful reserve.  While hunters make their way here in search of Sika Deer, Chamois, and Feral Goats, Te Awaroa National Park has also seen an influx of tourism due to the movies recently filmed in the area. It’ll be up to you and warden Kiri Taylor to ensure that no permanent damage is done to the splendour of the reserve, and that its native flora and fauna are preserved.  TE AWAROA’S FAUNA Tracking the numerous animals that roam Te Awaroa’s stunningly diverse environments is a favorite among hunters. For some, it’s the rush of stalking a prized Sika Deer in the beech forest that draws them here, while others come in hopes of catching a rare glimpse of the Feral Pigs, Feral Goats, and Chamois. And for those looking for a more relaxed experience, there’s plenty of Red Deer, Turkey, European Rabbits and Fallow Deer to hunt.  THE NEW ZEALAND FLORA It’s of no surprise that Te Awaroa has been used to depict fairytale landscapes, as it's ever-changing ecosystems are truly a sight to behold. From the steep, impressive mountains that divide the reserve, to the sparkling beaches and dense temperate forests, the region transforms under your very feet. There are also more familiar hunting grounds available, such as spruce and pine forests. VERSATILE SURPLUS RIFLE What the F.L. Sporter .303 lacks in condition, it more than makes up for in performance. The bolt action is smooth, reliable and easy to cycle, and it’s a proven rifle for both hunting and target practice. With a wide selection of compatible sights, and a great effective range, it can take down a broad selection of animals without problem. MISSIONS AND MEASURES Stretching across a vast 25 square miles (64 square kilometers), Te Awaroa National Park has always been a place to get away from it all, both for the first Polynesian settlers and the hardy men who made their names hunting deer from helicopters. Times are tough though, and when warden Kiri Taylor reluctantly agrees to allow a series of Hollywood films to be made in the reserve, it goes from sleepy backwater to daytripper hotspot almost overnight.  Now, with the reserve's delicate ecology threatened, Kiri has had enough. With you at her side, she’s going to show the world that New Zealand isn’t all just haka and halflings. Across 16 new story missions, you’ll deal with local menaces, patch things up between old friends, and discover the truth behind a long-forgotten legend. SHARE THE EXPERIENCE You’re able to hunt in Te Awaroa National Park even if you don’t own the DLC by joining someone in multiplayer who does. This will give you access to everything except the narrative missions.

theHunter: Call of the Wild

Related:
5 Tips to Help You Survive in the Frozen Forests of The Wild Eight
Thrive with the Mercenaries in Vigor – Season 7
New Champion Yagorath Arrives with Paladins Season 4: Calamity