This month sees Remedy, the acclaimed studio responsible for the likes of Max Payne, Alan Wake and Quantum Break, make its PS4 debut with Control. Any new release for a studio with that kind of pedigree is cause enough for excitement, but the Finnish team’s latest project is buzzworthy in its own right, promising a uniquely avant garde take on the third-person shooter genre.

With our interest well and truly piqued following a slew of intriguing trailers and some glowing E3 media coverage, we took Control for a spin and then sat down with Game Director Mikael Kasurinen to pick his brains. Here’s what we found out:

1. Control is seriously out there

You play as Jesse Faden, a young woman who finds herself drawn to a strange Tardis-like New York office block, home to a shadowy government agency called the Federal Bureau of Control. Once inside, not only does she discover that it has been taken over by a supernatural threat referred to as The Hiss, but she also learns that she has been appointed the agency’s new director – whether she likes it or not.

It’s up to you to tame a set of new-found supernatural powers, figure out what the heck is going on, take the building back, and unravel Jesse’s mysterious past. 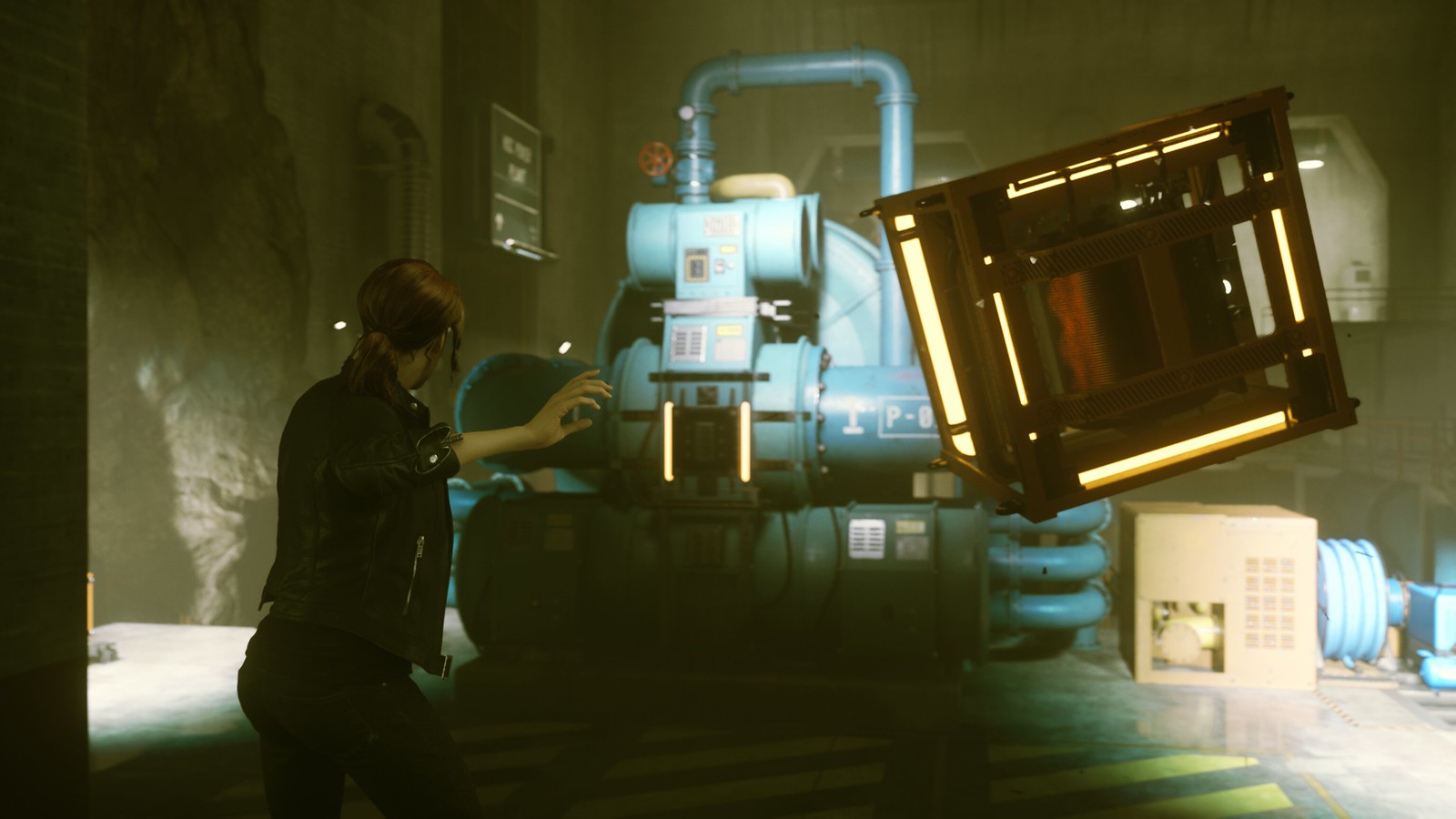 Sound straightforward? Anything but. Control dazzles with both its striking neo-brutalist visual aesthetic and an ambitious narrative that toys with some head-spinning themes. Fans of sophisticated sci-fi will be right at home.

“We’ve been looking at movies that demonstrate elements that are bizarre and beyond our understanding, but somehow connect with the human condition. Movies like 2001: A Space Odyssey, Stalker, and Annihilation,” says Mikael, laying out some of the studio’s inspirations.

“Regarding books, House of Leaves by Mark Danielewski has that compelling restrained strangeness and complexity, with a strong personal and psychological layer. It embodies many of the elements we want to express in Control. The same could be said about the Southern Reach trilogy by Jeff VanderMeer.

“Then there’s also that quirky Remedy flavor that we want to have there as well, and we’re often handling that through our characters,” he continues. “In that regard David Lynch is a massive inspiration for us, especially Twin Peaks.” 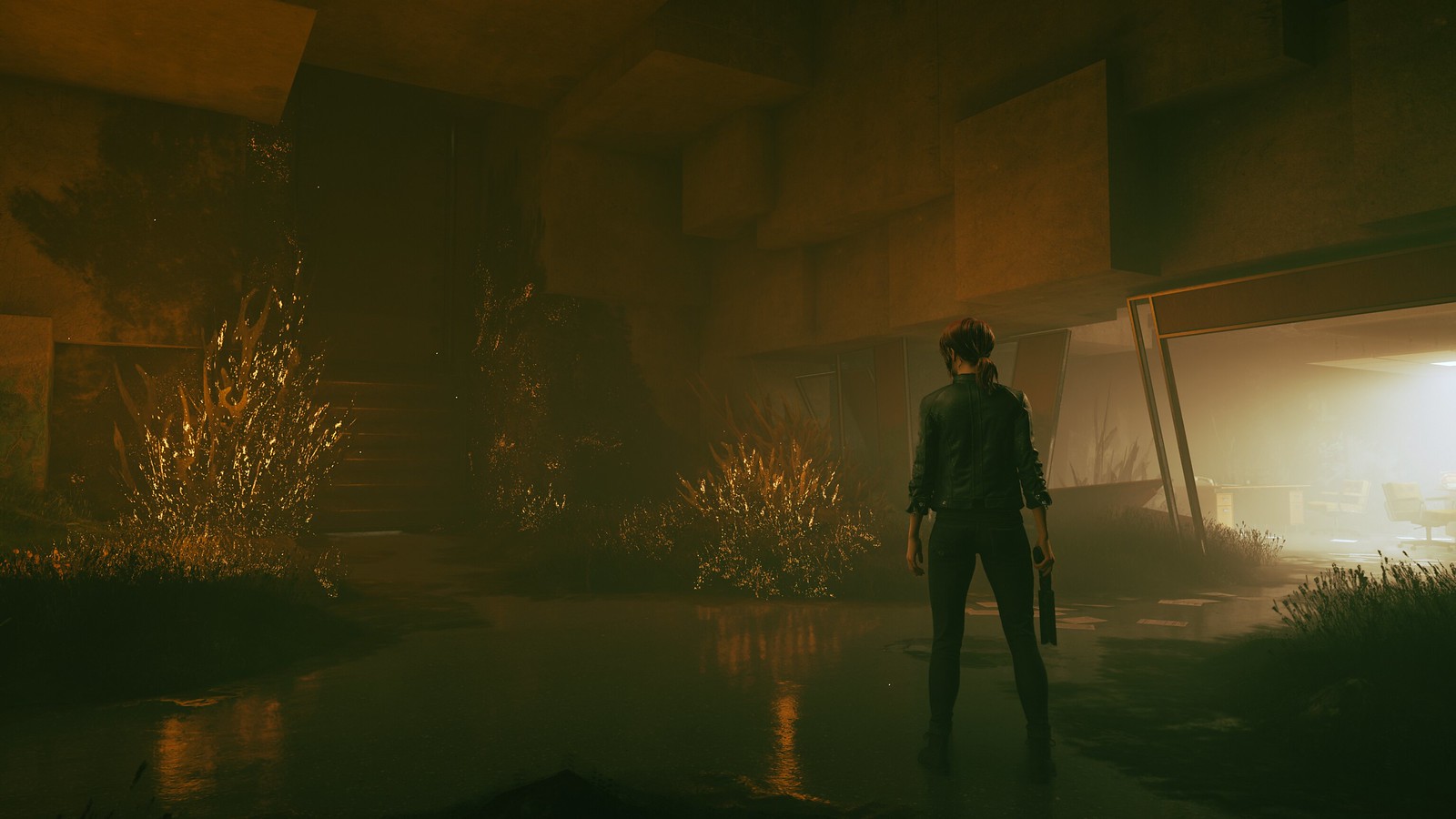 In its first few encounters, Control appears to be a pretty no-nonsense shooter. You pick up your service weapon from the office of the former bureau director (he’s just used it to put a bullet in his own head) and go to town on mobs of unfortunate agency staff corrupted by the aforementioned Hiss. Aim, shoot, take cover, repeat – standard stuff.

But it’s not long until Control’s combat develops into something far more interesting. As you progress, you learn a series of supernatural abilities that, when combined with traditional gunplay, coalesce into a really deep, playful system. 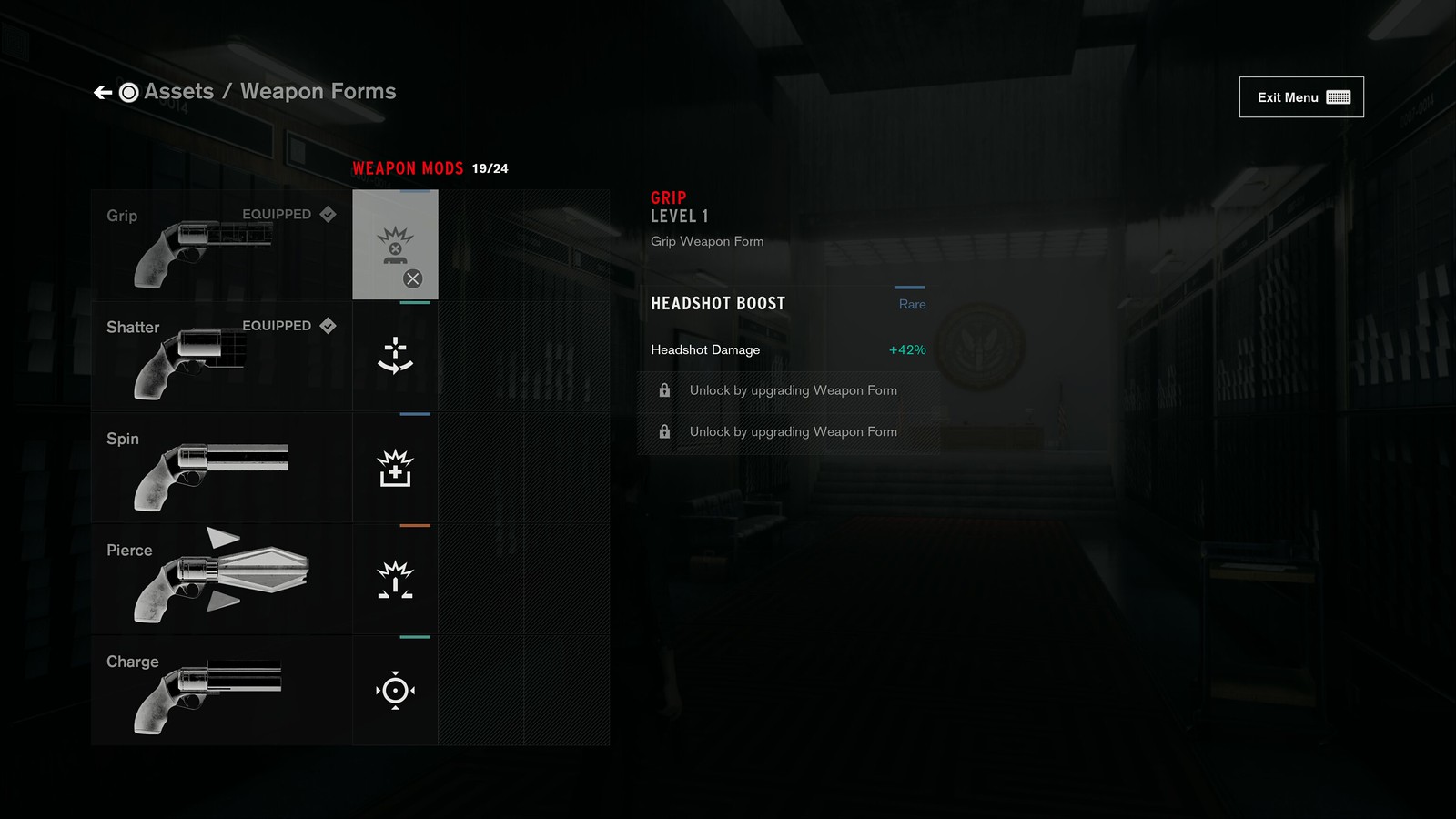 For example, the first two abilities we pick up are Launch, which lets Jesse levitate any bit of furniture she can find and fling it at the enemy, and Evade, which lets her teleport a small distance to dodge an enemy attack or traverse the landscape.

In one encounter, we use Evade to dodge an incoming enemy projectile, then unload our side arm into the foe to destroy its forcefield, then use Launch to hurl a desk chair at them and finish them off – all in the time it would take to whisper “ooh, emergent gameplay.”

As you progress further, you unlock new firing modes for your weapon and additional abilities, which you need to mix-and-match to take down a diverse array of enemies. Not only is it pleasingly strategic, but wrecking shop in the game’s destructible environments feels great. 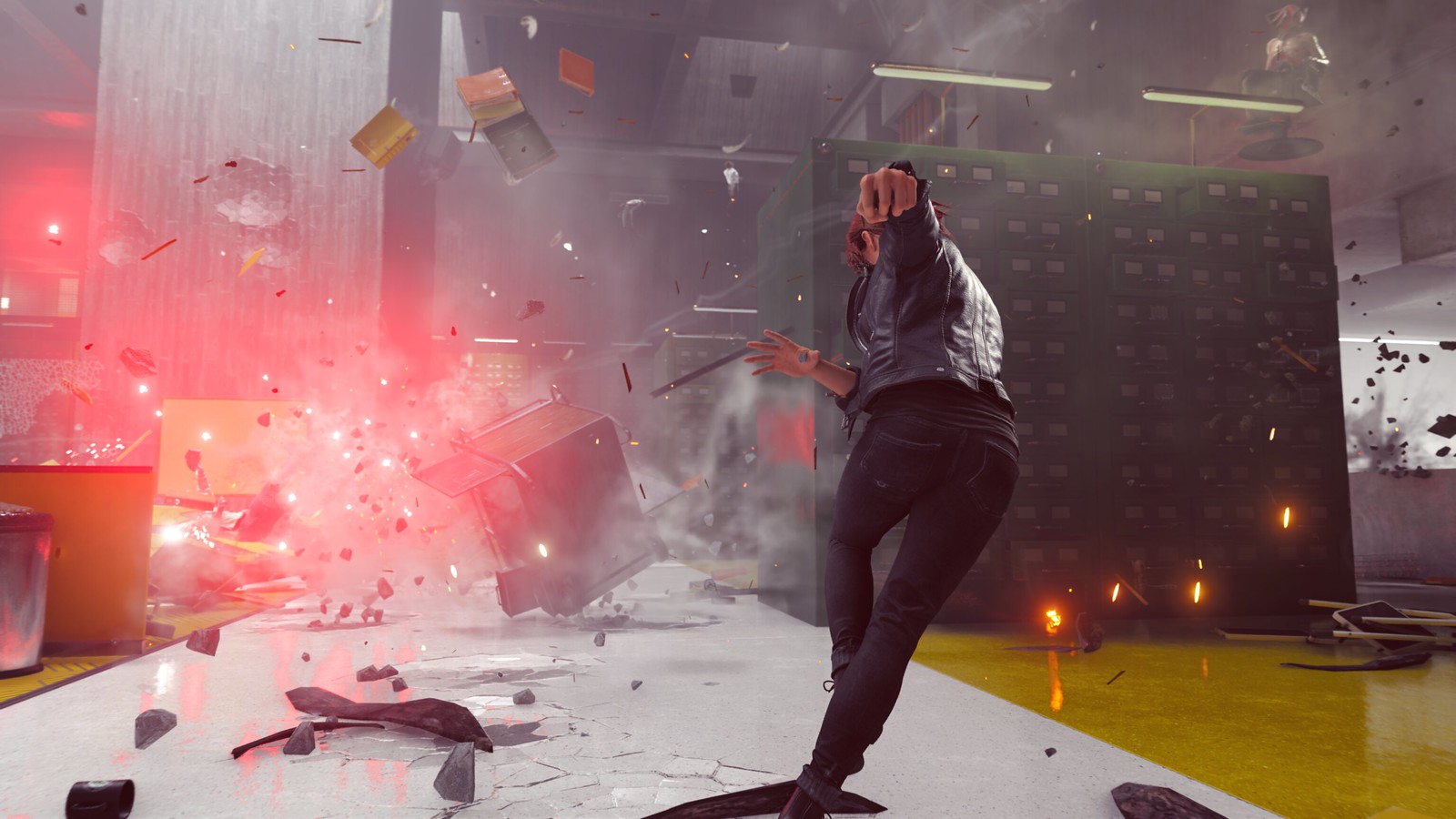 “The goal was to setup a sandbox that ensures the abilities, enemies and environments feel connected and are as dynamic as possible,” says Mikael.

“The player needs to master the different abilities and learn to read the room so that they can use the environment against the Hiss-possessed enemies.

“The enemies pose a lot of surprising, complicated scenarios, but through mastering the abilities and the Service Weapon the players can start to improvise… and the game really starts to bloom and become a lot of fun.

3. The Oldest House is an extraordinary setting for a video game

Going in, our initial concern was how Remedy was going to be able to incorporate enough variety into what, on the face of it, is essentially an office block. But we’re happy to report that the studio’s artists and designers have gone to town on the game’s labyrinthine setting, crafting an extraordinary, almost Escher-like structure that thumbs its nose at the laws of physic. It’s a constantly shifting place that throws up secrets and surprises at every turn.

“The Oldest House is a ‘place of power’ that expresses itself with a certain aesthetic. It is vast, with multiple different areas which the bureau calls ‘sectors’. Each sector has a purpose, like Containment, Research or Maintenance. 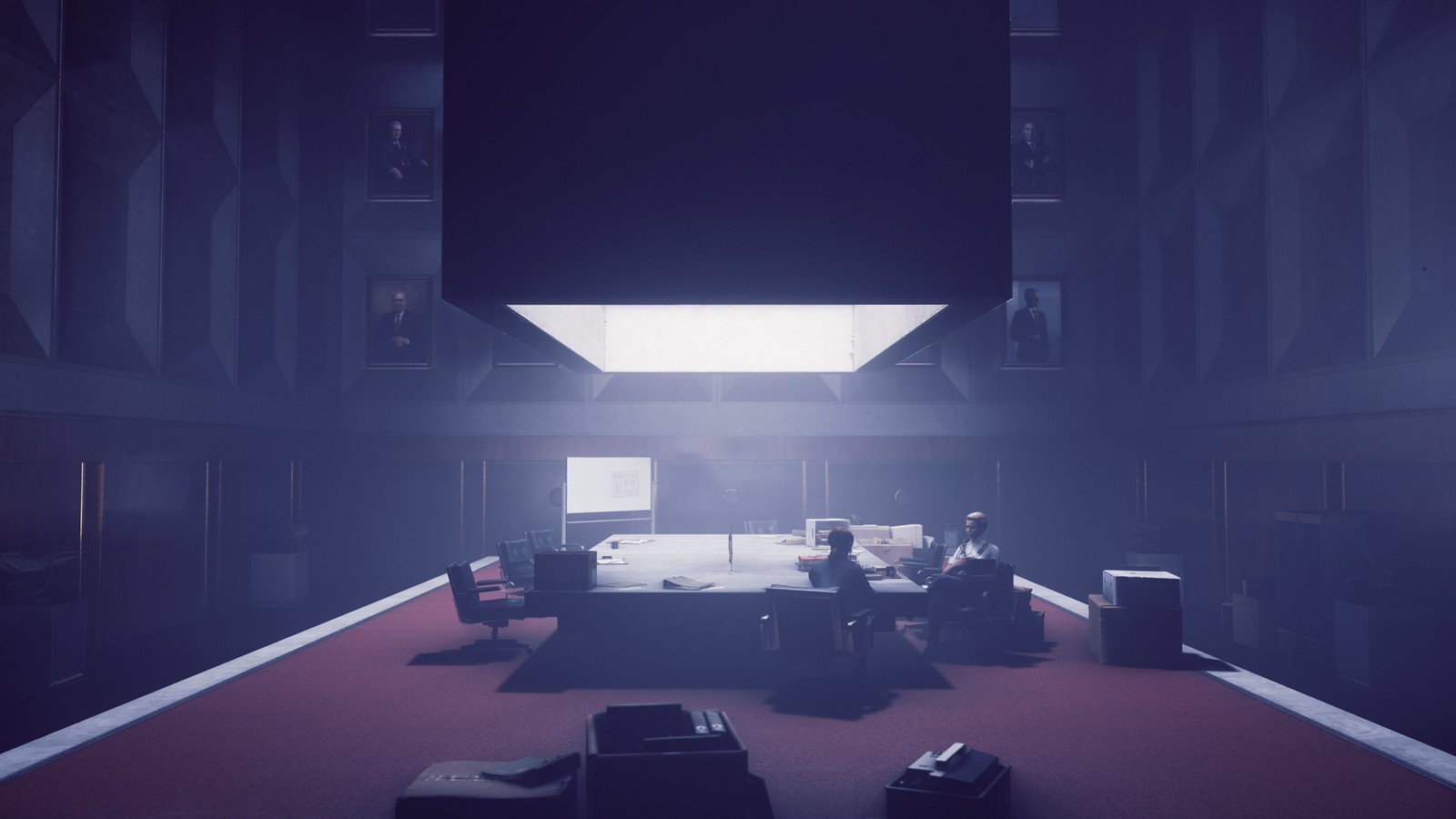 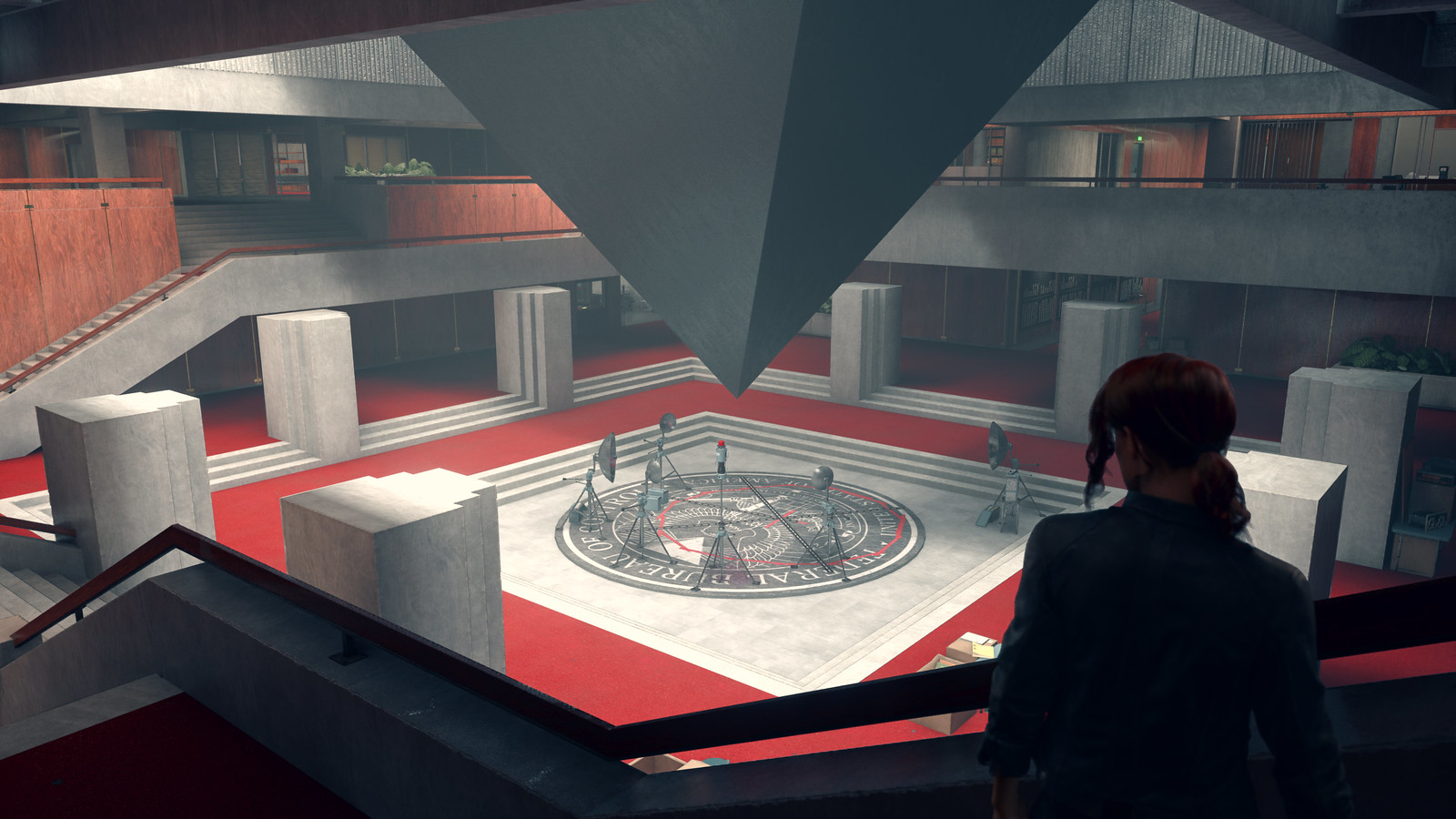 “But what is important to understand is that there are layers to The Oldest House. It is simply a space that the bureau has chosen to occupy, and this place or the space within, is shifting and adjusting itself to a certain unknown purpose or pattern.

“Within, you can find wonderful and terrifying locations, endless vistas, shifting environments, rocky landscapes and weirdly corrupted formations. The mundane ‘office’ area is just a small part of the structure that the bureau has chosen to occupy.”

Sure, there’s plenty of action in Control, but it’s by no means a simple shooting gallery. You’ll also need to exercise your grey matter to solve both environmental puzzles and narrative riddles that, in keeping with the dream logic that underpins the game’s plot, demand you think outside the box.

“This game has more puzzles than what we’ve ever done before,” claims Mikael. “It’s about us wanting to create an adventure for the player, a world filled with mystery and wonder, with rewards to find and lore to discover. 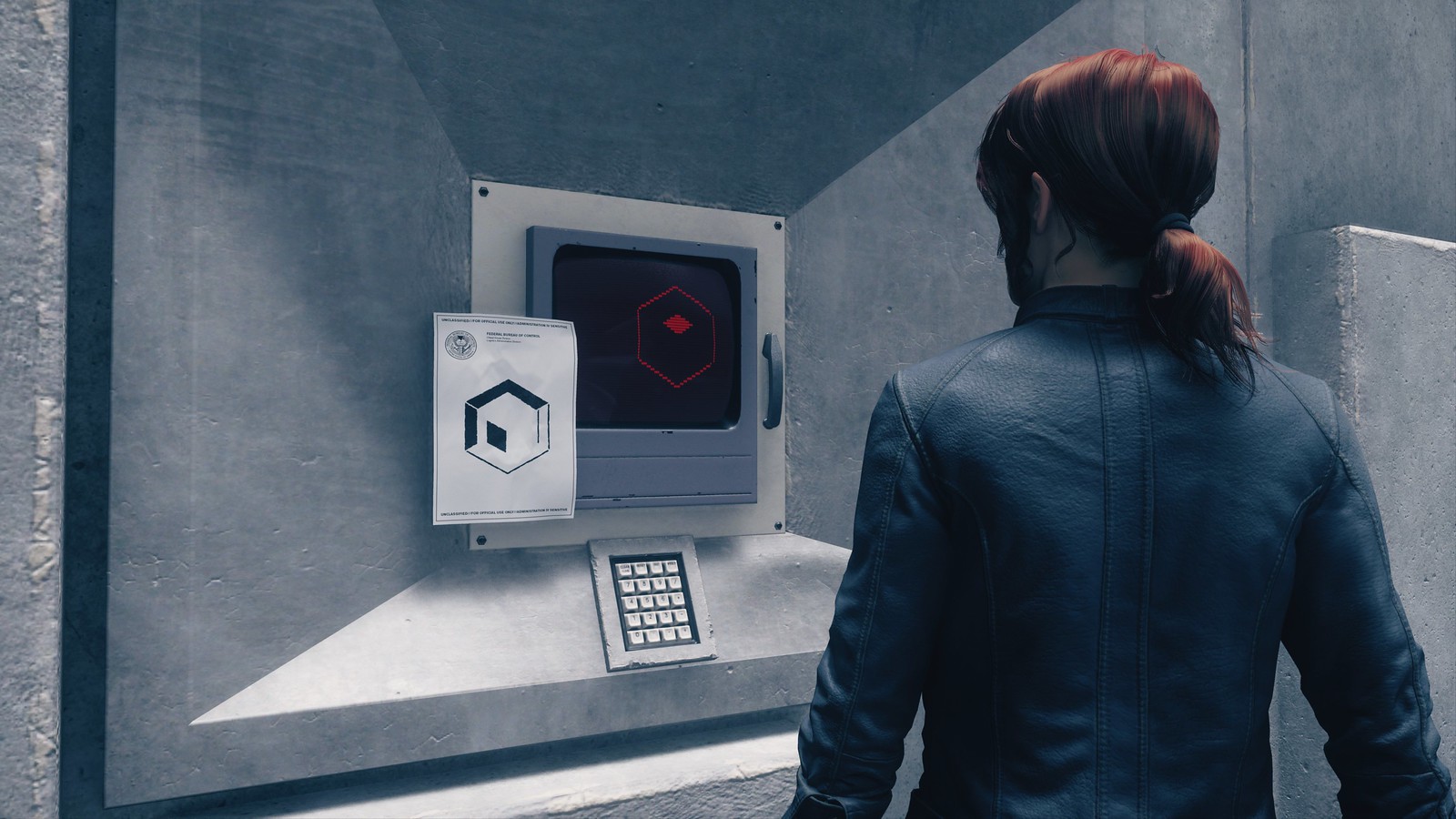 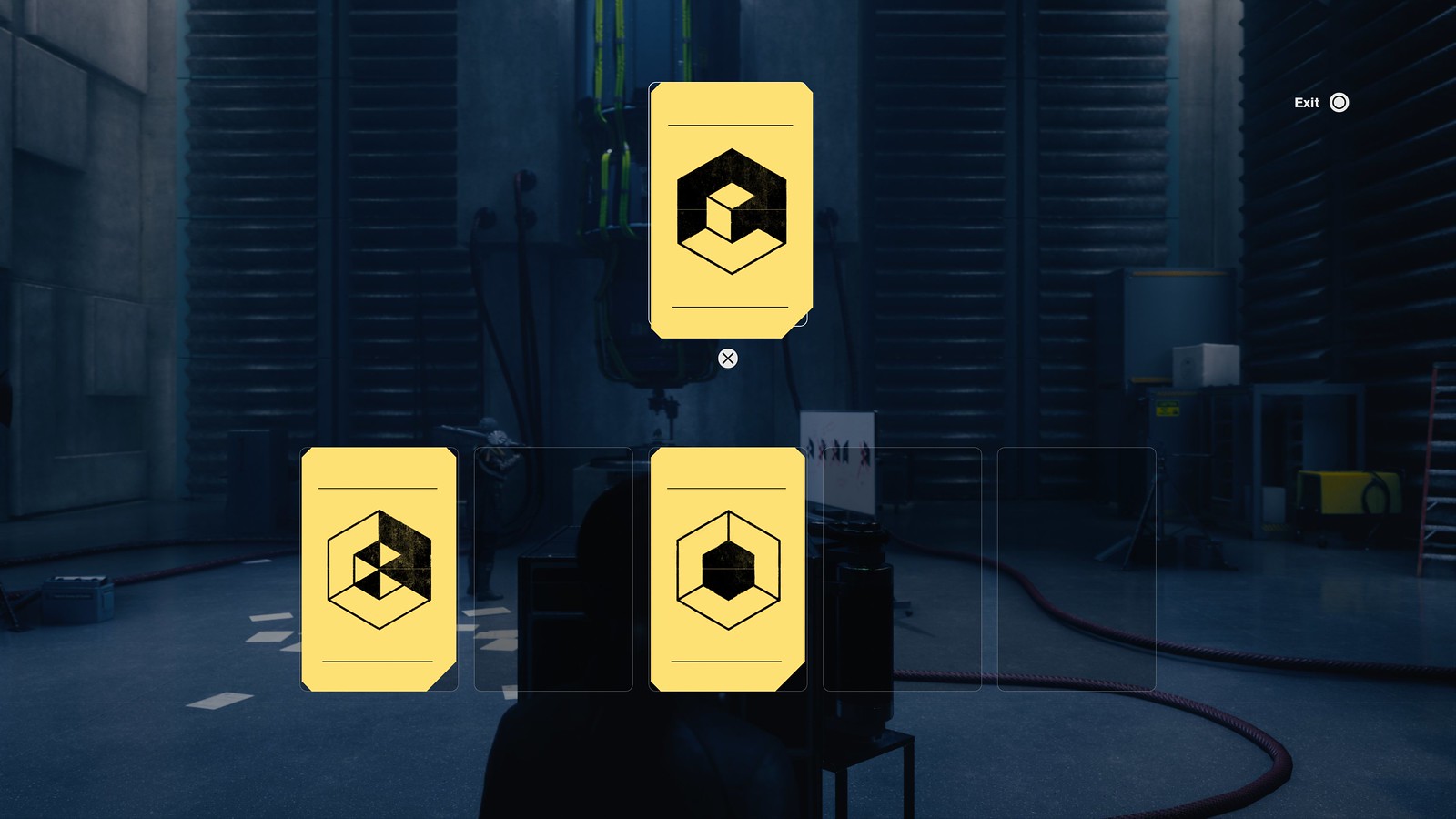 “To achieve that, we needed to create puzzles that feel like they fit into this world and to the overall context of the moment when they’re found. To get variation we have different types of puzzles, some of them focusing on narrative elements, and some on mechanics and physics.

“With this type of a setting and mechanics, creating puzzles was actually quite straightforward, but of course we needed to iterate them quite a bit to ensure they are intuitive and fun to execute. It’s a really difficult balance to get puzzles right in an action game, so hopefully we nailed it.”

There is a linear route to take through Control that sees you going from point A to point B to point C, collecting the necessary items and talking to the necessary people in order to complete the game’s primary narrative – the mystery of why Jesse Faden is here, and how she can fix things. But that is just part of Control. Remedy has filled its sandbox with all manner of optional secondary objectives, squirreling away additional items, story arcs and boss battles way off the beaten track. 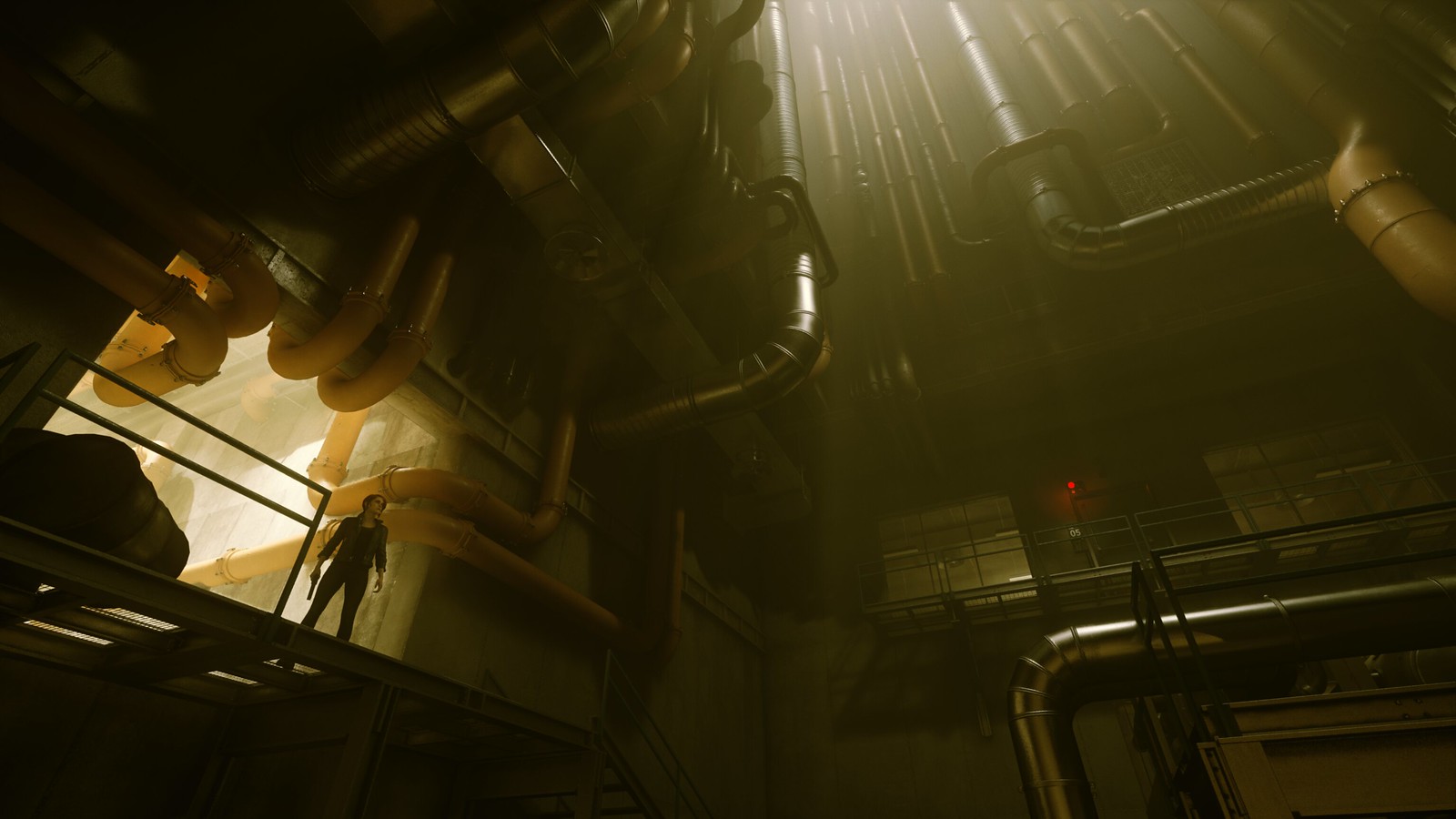 “You can’t have the full Control experience without exploring the Oldest House,” insists Mikael. “It is filled with secrets and lore that open up the history of the place and maybe gives some clues on the phenomena that you witness.

“Instead of making the game ‘replayable’, for us it was more about creating a world that you can keep exploring. Sometimes returning to an old location can be fun since you can access areas that you couldn’t before due to having a new access level, or an Ability. 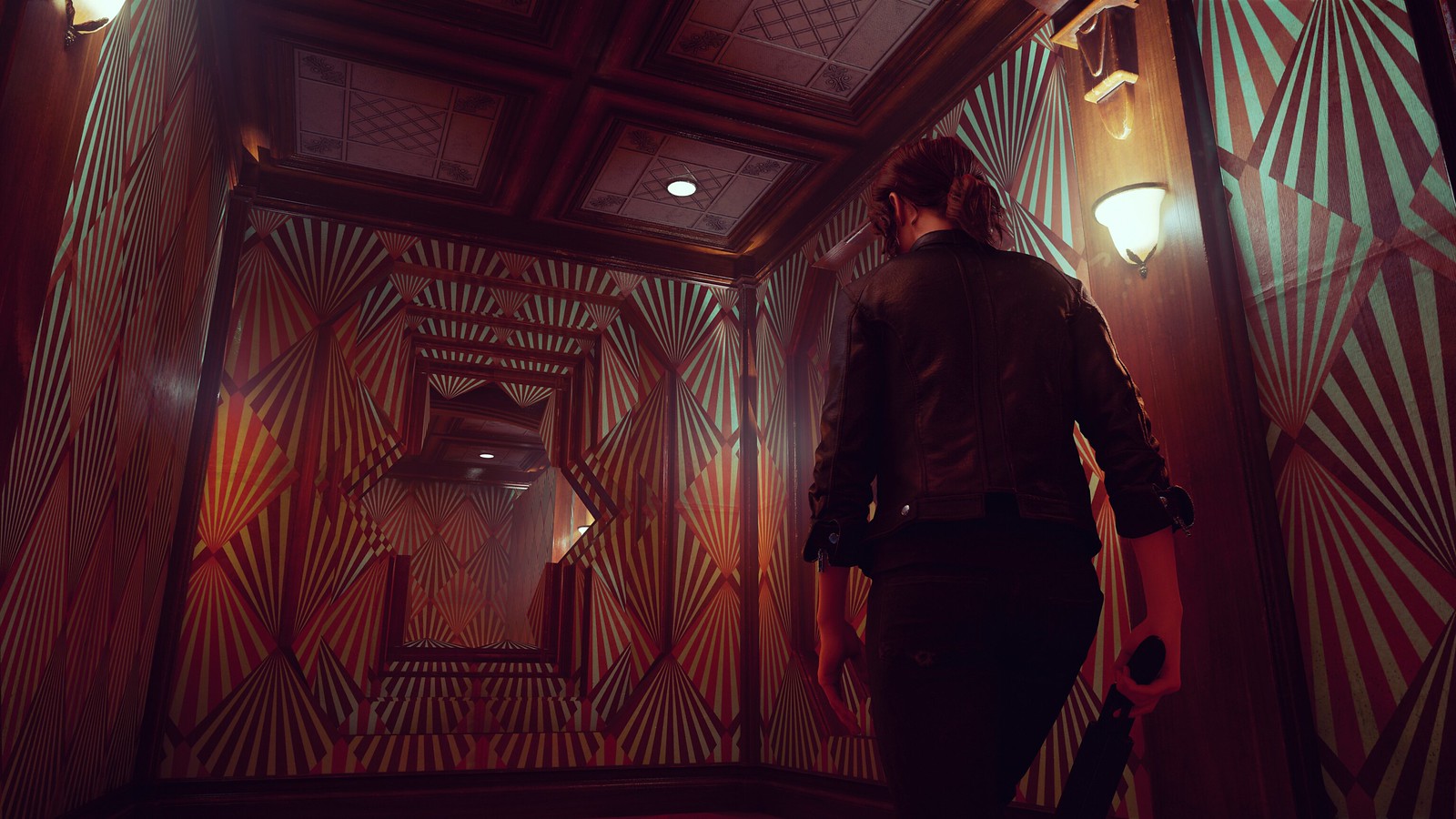 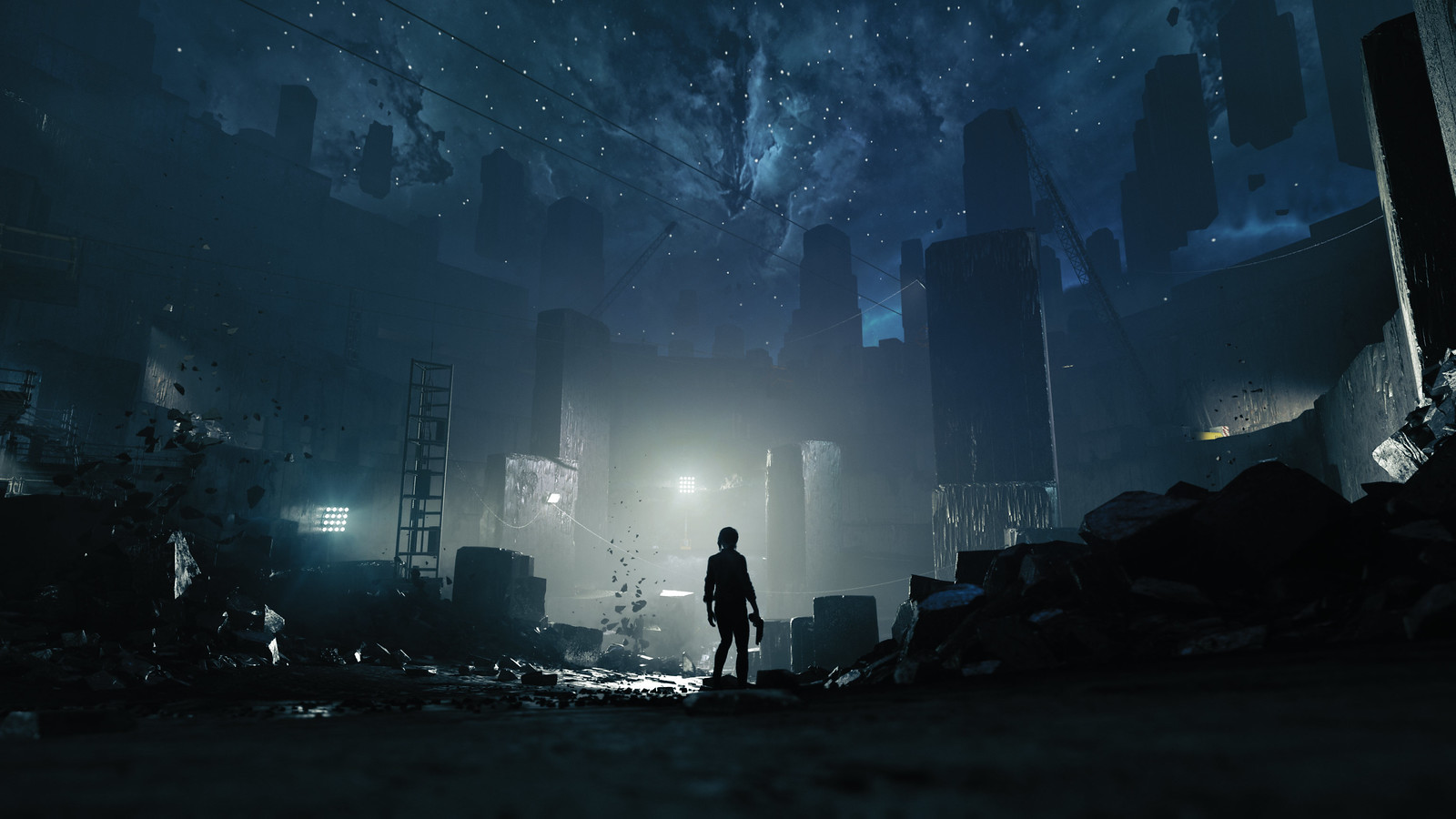 “We had to accept that we will create a lot of cool content that many might never find. This will be the thing that will make people spend time in this world. A huge part of the content is actually purely optional in regards of the main story arc, and we hope that people realise that, so they’ll spend more time exploring the Oldest House.

“It is not about repetition, it is about structuring the content in such a way that exploration, and just ‘being there’, is what you want to do, because everything you find will feel meaningful.”