New games from Xbox Game Studios will premiere on Xbox Game Pass for PC, and we’re also working with over 75 content partners to bring a unique library full of great PC titles across a variety of genres to members, including well-known games such as Metro Exodus, Wolfenstein II: The New Colossus, Football Manager 2019, and Imperator: Rome, with new games added all the time and many titles available on the same day they launch so you always have something new to play. You can check out the full list of titles we announced for Xbox Game Pass today here.

Visit xbox.com/xbox-app from your Windows 10 PC, and download the Xbox app. As part of the install we’ll make sure your system is up to date. Already on the latest build? Download the app from the Microsoft Store.

Here’s a rundown of everything you need to know about Xbox Game Pass for PC, including navigating the new Xbox app: 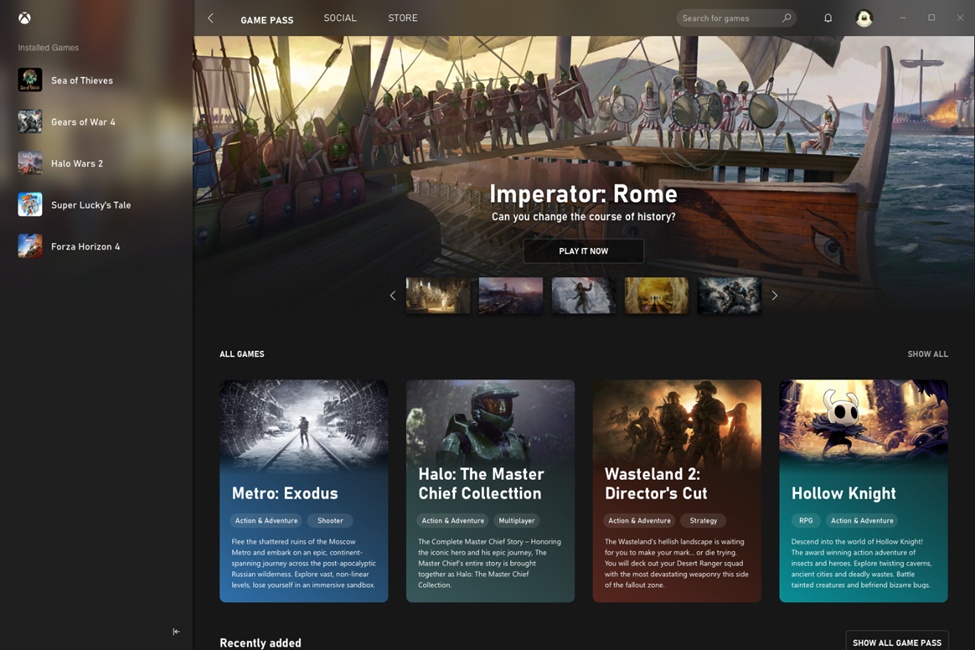 Discover Your Next Favorite Game with the Xbox Game Pass Tab

In the new Xbox app, you can join Xbox Game Pass for PC directly and start exploring the library of high-quality PC games via the Xbox Game Pass tab. Browse by genre, see recommended and featured games, or search for a game if you have something specific in mind. Not sure what to play next? Try the “Surprise Me,” feature which will suggest a random game from the library that you haven’t downloaded yet.

Once you’ve discovered your next game to play, you can quickly and seamlessly install, manage and launch your games from the library. When downloading new titles, they will immediately appear in the ‘Installed Games’ sidebar of the app and you can directly launch the game from this icon, too. The most recently played and installed games will be at the top of the bar, and you can reorder the titles to fit your preferences. 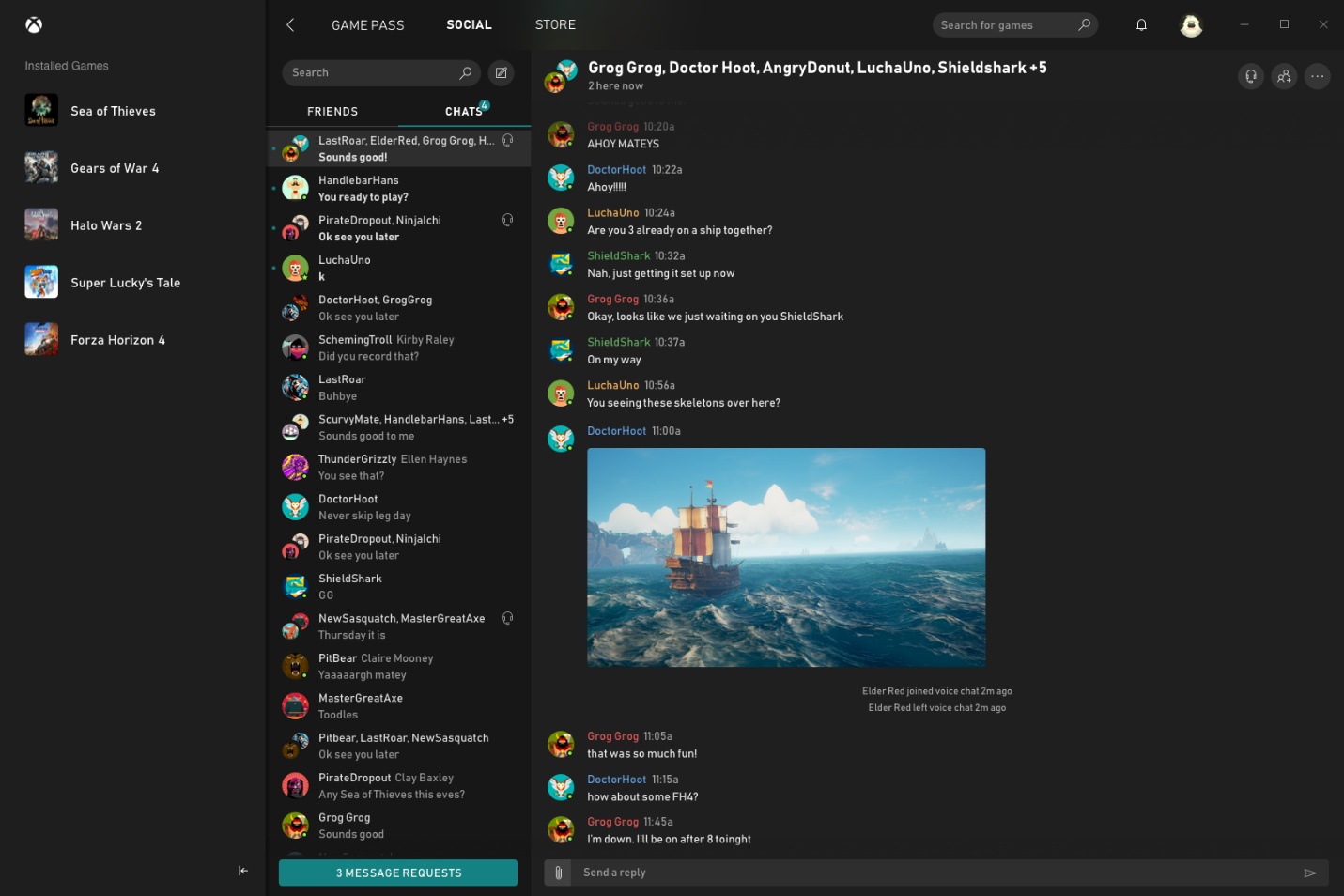 Chat with Friends Across PC, Xbox Console and Mobile with the Social Tab

Once you’ve downloaded your newest title, you can jump over to the Social tab in the new Xbox app to chat directly with friends for a connected gaming experience. You can chat either by voice or text, either 1:1 or in a group channel. Text chat also supports gifs and embedded videos for a visual and interactive experience.

We also wanted to make sure your conversations easily move with you while you play. When you launch a game, your chats will automatically update and sync with Xbox Game Bar to provide a seamless in-game experience.

Want to get the latest news from your favorite developers, chat with other fans of a game, or make sure you’re always up to date on what’s happening in popular titles?  You can also check out the official clubs in the app. 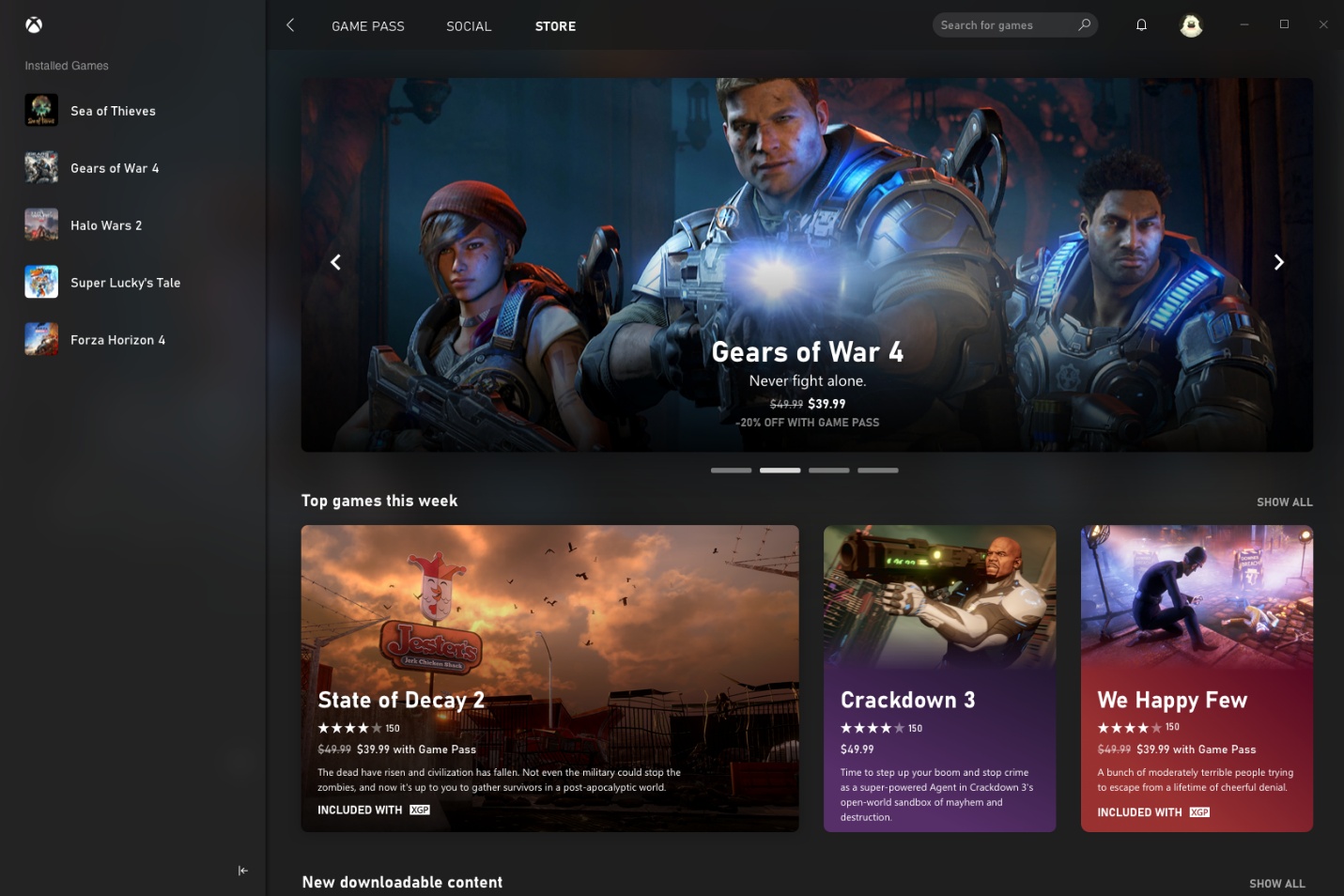 Explore the Latest Games and Discounts with the Store tab

Within the new Xbox app, we’re launching a Store tab dedicated specifically to PC gamers where you can browse the entire library of Xbox Game Pass titles and a catalog of digital PC games sold through the Microsoft Store on Windows. Here, Xbox Game Pass members can also take advantage of their member benefits and get up to 20% off games and up to 10% off DLC and add-ons for games in the Xbox Game Pass library.

We’ve made Xbox Game Bar, our customizable gaming overlay, an easy-to-use way to quickly capture screen shots and videos, connect with friends across devices, and find new teammates without leaving the game. Xbox Game Bar is built into Windows 10, so it connects players to have fun together on as many PC games as possible. The new Xbox (Beta) app and Xbox Game Bar also work together seamlessly. For example, you can start a conversation in the new Xbox app, then simply press Win+G to continue the conversation with Xbox Game Bar while playing your favorite game. The Xbox app automatically minimizes to your system tray when you launch a game, so press Win+G to send a quick message, and then get back into the action without taking your eyes off of your game. For more details on our newly revamped Xbox Game Bar, see here.

We are a passionate team of gamers who are inspired to continue improving the gaming experience on Windows 10. We’ve built the Xbox app from the ground up with community feedback in mind and will continue to update the app based on your feedback, so please continue sharing what you think. To help us evolve the app and continue to build seamless, fast and easy-to-navigate experiences within the app, go to Settings > Feedback and share your thoughts, so you can help us build a PC gaming experience you love.