Since its release in 2016, millions of players have been exploring the world of Forza Horizon 3 on Xbox One and Windows 10 PCs, the highest-rated Xbox One exclusive. We are pleased to announce that, today, Xbox One X enhancements arrive for Forza Horizon 3, as a free download for players with an Xbox One X.

Forza Horizon 3 on Xbox One X is powered by the same state-of-the art ForzaTech engine at the heart of the Forza franchise, also used to develop Forza Motorsport 7 for Xbox One X which brought native 4K resolution racing to the new platform. Forza Horizon 3 enhancements let players experience the game in native 4K along with a host of additional visual updates, including improved car reflections and shadow resolutions, improved texture detail for road and terrain surfaces, and more. In addition, 4K resolution enhancements will be fully compatible with both Blizzard Mountain and Hot Wheels expansions for Forza Horizon 3. Whether you’re careening across the dunes of the Outback in your favorite off-roader or building up a legion of fans with death-defying stunt driving in the rainforest, the 4K-enhanced version of Forza Horizon 3 is a thrilling blend of fantastic gameplay and cutting-edge visuals. 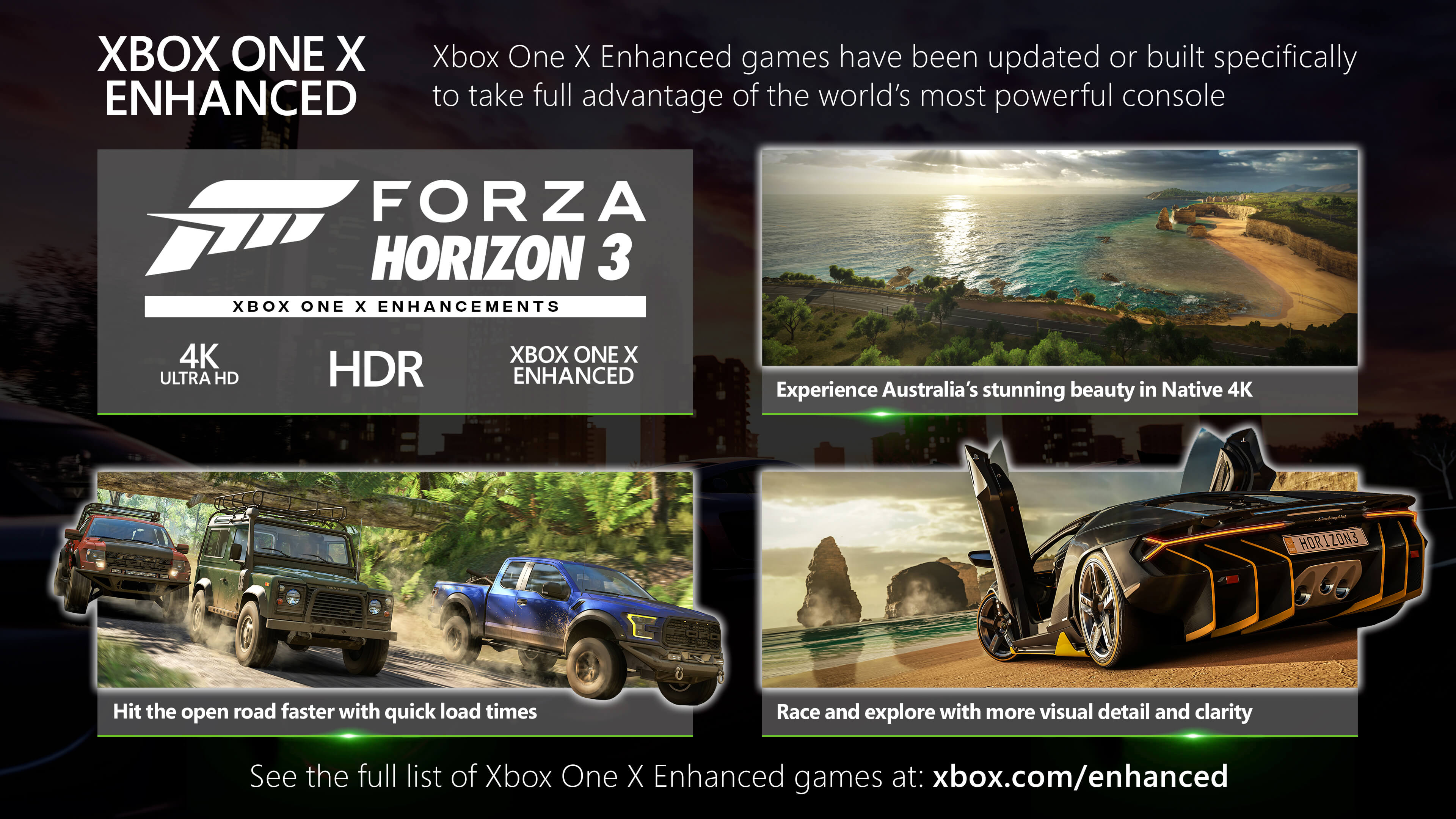 As part of Xbox’s ongoing Inside Xbox One X Enhanced series, I chatted with Playground Games’ creative director Ralph Fulton for insight into the studio’s work on the enhancements. Enjoy!

What specifically has your team done to enhance Forza Horizon 3 for Xbox One X?

First and foremost, this update enables Forza Horizon 3 to run in native 4K (3840×2160) on a console for the very first time. Forza Horizon 3 has always been a fantastic-looking game but the clarity and detail of native 4K resolution really brings the vast playground of Australia to life like never before. In addition, we’ve made a number of graphical improvements to the game, such as increased shadow resolution, improved visual effects and increased LOD and draw distances, which take advantage of the power of the Xbox One X.

These enhancements are all about the visuals.  We know that our fans really value great image quality, so we’ve taken this opportunity to deliver that to them with this update on Xbox One X. On top of the obvious enhancement to native 4K, there are a number of other improvements we’ve made which really take advantage of the added definition 4K brings. Reflections are sharper and clearer, environment shadows are crisper and better defined, the quality of motion blur has been increased to make the driving experience significantly smoother, and better anisotropic filtering improves the detail visible in environment textures, particularly on the roads themselves. For me, the biggest improvement is in the combination of 4K and HDR though, especially in Forza Horizon 3‘s dynamic time-lapse skies. The sky is such a huge part of nearly every scene in the game that it affects the feel of the game a great deal, and the improvements we’ve made to reflections and shadows really complement it.

We’ve been positively overwhelmed by the positive feedback we’ve had from the community over the last year about the quality of the gameplay in Forza Horizon 3 and the amount of fun they have with it, and we feel really proud that we’ve been able to keep that going with the high-quality Blizzard Mountain and Hot Wheels expansions, car packs and weekly Forzathon events. This was our opportunity to bring the game to native 4K on console for the first time and make a great-looking game look even better.

How do you expect Forza Horizon 3 fans will respond to seeing and playing it on Xbox One X with these enhancements?

I feel like we’re at the crest of a wave in the transition to 4K – more and more people are trading up to 4K TVs and want native 4K experiences to show what their new TV can do. That was exactly my experience when I upgraded recently and I’ve really enjoyed getting back into some of my favourite games, like the The Witcher 3 for example, as they’ve released their enhanced versions. I hope that will be the case for Forza Horizon 3 fans as well. When I’ve been playing with the update in the studio, I’ve been really blown away by the beauty of the world, like I’m seeing it for the first time and I hope Horizon fans feel the same way too. One of my favourite things about Forza is the incredible photography which comes out of the community.  I follow a bunch of Forza photography accounts on Twitter, where the creativity of Forza fans always blows me away, so I’m really looking forward to seeing the community photographs which come out of the enhanced version.

It’s been incredibly straightforward. It took us less than a day from receiving our first Xbox One X kit to get Forza Horizon 3 up and running in 4K, and when we did we still had a lot of spare headroom on both the CPU and the GPU. The Xbox One Development Kit for the Xbox One X is by far the most developer-friendly and powerful dev kit we’ve ever worked with, which makes it a pleasure to develop for.

What enhancement were you most excited about to explore leveraging for Forza Horizon 3 on Xbox One X?

Our goal with this update was to bring Forza Horizon 3 in 4K to console for the first time, and that’s what we’ve delivered. As I mentioned earlier, as one of the first titles which featured HDR on the Xbox One S, we’ve been really excited by the visual combination of native and HDR technology – it is a real, evolutionary leap in graphics.

We know our players value incredible visuals, effects and image quality, and we put a huge amount of effort into delivering them with every title. Native 4K resolution, especially when combined with HDR, is a huge step forward in visual fidelity and as mass adoption of 4K displays continues it will become the standard by which game visuals are judged. For us, as a studio, the power of the Xbox One X, as well as its ease of development and straightforward compatibility across the Xbox One family of devices, has made it the lead development platform for the new title we’re currently working on. This means a couple of things. First, it means we’re developing from the ground up to take advantage of the Xbox One X’s enormous graphical horsepower, an approach which will continue to yield massive advances in visual quality. Secondly, though, it also means you’ll see improvements on Xbox One and Xbox One S as a result – we find that there’s a trickle-down effect when you develop for the most powerful hardware which brings improvements even on the less powerful machines.

Make sure to join us on the official Forza Motorsport channel on Mixer to watch as we show off the Xbox One X version of the game, starting on January 16 at 1 p.m. PST. Stay tuned to ForzaMotorsport.net for updates.