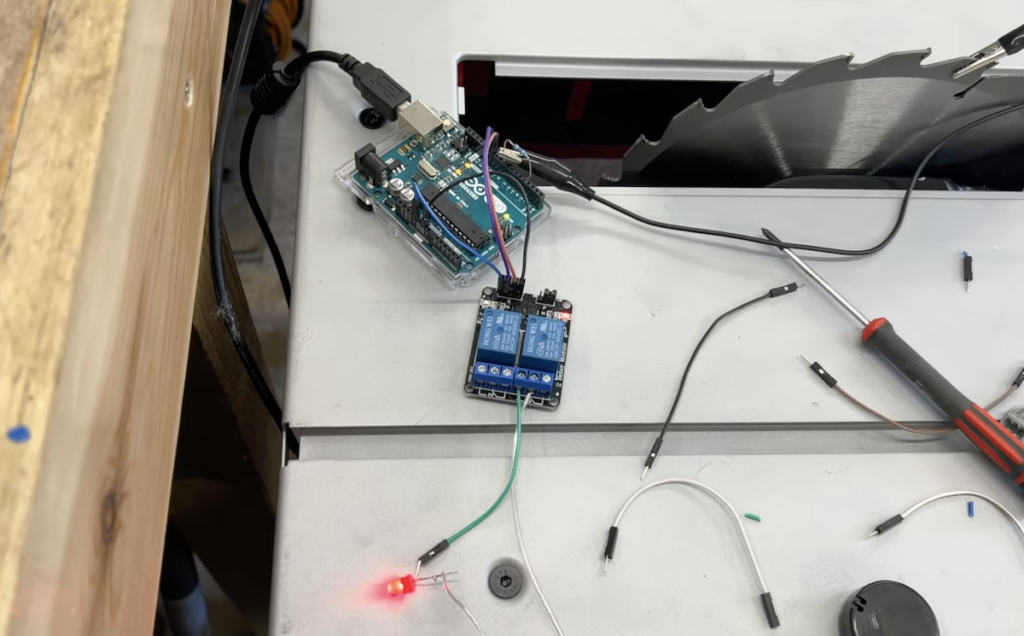 Many power tools have the potential to cause serious harm, but few are as dangerous as table saws. But table saws are also indispensable for woodworking, which means that people are willing to risk their fingers to use them. There is a manufacturer called SawStop that builds table saws that automatically stop the blade if they detect flesh. Unfortunately for hobbyists, SawStop table saws start at around $900 for even the most compact models. After receiving a free table saw from a friend, Ruth Amos decided to add DIY SawStop-style finger protection on a friendlier budget.

SawStop table saws have braking systems built to work with special blades. They use capacitive touch sensing, just like a touch-sensitive button, to detect when a finger (or any other body part) touches the blade. When that happens, it deploys the brakes and brings the blade to stop in just a few milliseconds. As SawStop advertisements love to demonstrate, the blade stops before it can do more than knick a finger. The emergency brakes destroy SawStop blades, but that’s a small price to pay to save a finger. Amos’s DIY safety precaution works in a similar manner, but without destroying the blade.

Amos used an Arduino Uno for the capacitive touch sensing. Originally she attempted to use a spring-loaded metal bar to stop the blade, but found that to be inadequate because it didn’t work fast enough. Then she came across electric PTO (power take-off) clutches for lawn mowers. Those perform the same function as clutches in cars: to engage and disengage a mechanical linkage. But unlike a car’s clutch, which operates with springs or hydraulics, a lawn mower PTO clutch operates electrically.

In a normal configuration, a clutch provides gradual engagement between a driven shaft and an output shaft. But in this setup, the clutch is fixed in place. In the disengaged position, it allows the blade to rotate as usual. In the engaged position, it acts like a strong brake. The Arduino only needs to fully engage the electric clutch when it detects a touch. In tests, this braking system seemed to work very well and it should save fingers if they ever touch the blade. But we do need to stress caution if you attempt to build something similar yourself, because there is a lot of danger here.