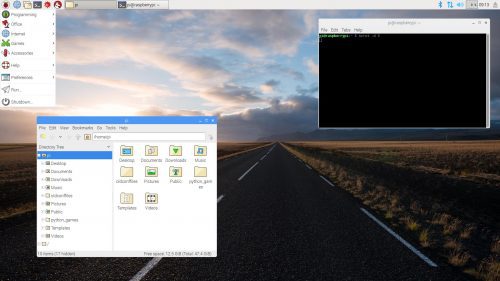 Want to feel old? Debian, the popular free Unix-like operating system based on the Linux kernel and GNU userland, is turning 25. Composed entirely of free software, Debian is maintained and packaged entirely by volunteers. Announced to the world by Ian Murdock 25 years ago this week, the first internal release, Debian 0.01, took place in September 1993, followed in June 1996 by a first stable version, Debian 1.1 (code name ‘Bo’).

Raspberry Pi owes a considerable debt to the Debian project. Our operating system images are built on top of Raspbian Stretch, which is a community-led rebuild of Debian Stretch, optimised for the specific ARM cores used in our products.

In addition to the core Debian system, we bundle a variety of useful non-Debian software. Some packages, like Simon’s UI mods, and the Chromium web browser, are free as in speech. Others, like Wolfram Mathematica and Minecraft, are free as in beer.

Our most recent release adds more usability features, including a post-install wizard to simplify the setup process for new users.

If you’ve yet to try Raspbian on your Raspberry Pi, you can download it here. This tutorial from The MagPi demonstrates how to write an image onto a fresh SD card:

Use Etcher to install operating systems onto an SD card

Lucy Hattersley shows you how to install Raspberry Pi operating systems such as Raspbian onto an SD card, using the excellent Etcher. For more tutorials, check out The MagPi at http://magpi.cc ! Don’t want to miss an issue? Subscribe, and get every issue delivered straight to your door.

And those of you who are already using Raspbian, be sure to check you have the most up-to-date version by following this easy video tutorial:

How to update to the latest version of Raspbian on your Raspberry Pi. Download Raspbian here: https://www.raspberrypi.org/downloads/raspbian/ More informatio…

Don’t have a Raspberry Pi? Don’t worry: we also make a version of our operating system, based on x86 Debian, that will run on your PC or Mac! With an x86-based computer running our Debian Stretch OS, you can also use the PiServer tool to control a fleet of Raspberry Pis without SD cards.