From The Incredible Shrinking Man in 1957 to Downsizing later in 2017, getting small has been a sci-fi staple for decades. In SVRVIVE Studios’ new VR experience, office supplies and bits of cardboard become weapons and environments in the small-sized city of Kartong.

We spoke with Robert Johansson, Level Designer and Oliwer Svensson, Art Director and 3D Game Artist at SVRVIVE Studios to get a newcomer’s guide to Kartong – Death by Cardboard!

Kartong! Tell us what it’s about in a small, cardboard box sized package. 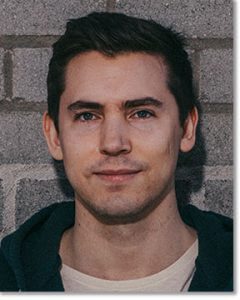 Robert Johansson: Well, the game puts you up against evil experiments inside the miniature city of Kartong. You find yourself shrunk to the size of a toilet paper roll and trapped in a maze of evil toys, with your life depending on a mediocre weapon made from office supplies.

Tell us more about the ‘game jam’ that gave birth to Kartong. 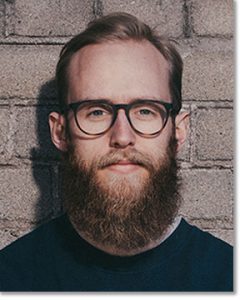 Oliwer Svensson: We wanted to challenge ourselves, the first thing being trying out a new game engine. Then after the game jam we showcased our games to each other, and two games felt more close to our hearts, one of them being Kartong. At that time, though, it was still just an ordinary maze game. But we fell in love with the game’s potential and me together with a few others were assigned to brainstorm a unique backstory and an authentic artstyle that felt new and fresh in VR. I gathered inspiration from Tim Burton and other similar genres which felt mysterious, chilling and gritty but not horror-like. We then created our own concept art which eventually set out to be Kartong – a creepy cute VR world completely made out of cardboard.

Oliwer: Well, when we started playing around with scale and realized being small in VR is truly engaging, we also knew we needed a backstory to why you would be tiny. We ended up with a really weird one: you’re stuck in a miniature cardboard city, built by “someone” with a twisted mind. The fact that it is a VR game about cardboard, but not built for Google Cardboard, made it all the more fun for us – since we like creating games that can be a little “confusing” in their naming or story.

Were you inspired at all by various SF takes on ‘shrinking’?

Robert: Naturally some of our inspiration came from classic SF movies, shows and games – but we’re also very much inspired by The Wonderful Adventures of Nils – a classical Swedish child tale by the author Selma Lagerlöf. Nils is shrunken and able to talk with animals, much similar to the player in Kartong that has been shrunken to the size of a toilet paper roll. The fact that our Creative Director is also called Nils just added to the fun for the rest of the team – it let us mess with him, in a loving way of course. VR can take you to new worlds, but we love the idea of being in a familiar environment – with a totally new point of view and scale. The shrinking aspect of the game is also connected to the semi-hidden backstory. So yes, we were partly inspired by classic SF concepts of shrinking but we also don’t want to say too much, as the story should remain somewhat of a puzzle for players to figure out. 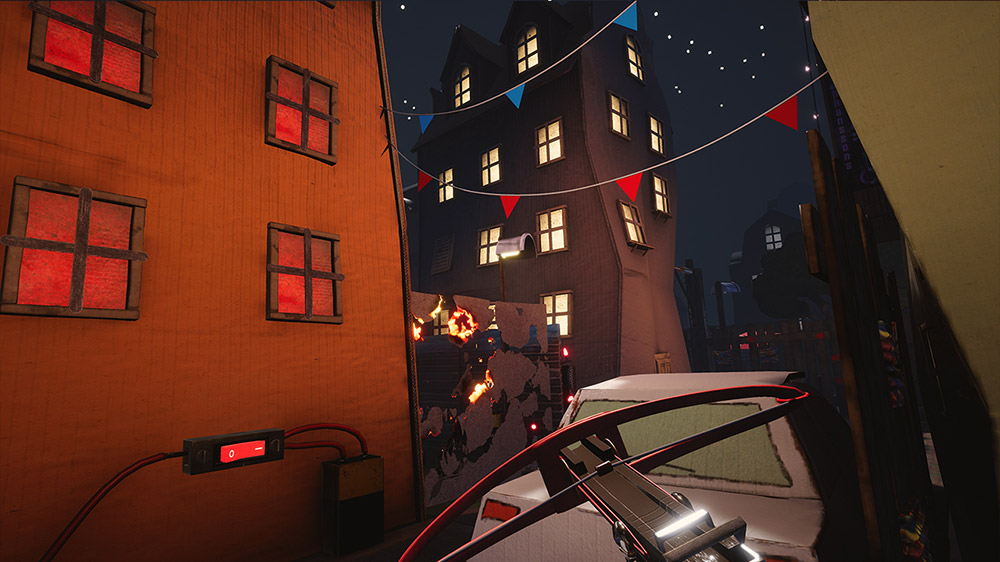 This is a pretty radical change from your previous title – The Deus Helix (available in Viveport Subscription). What were you inspired by, games-wise?

Oliwer: We’ve always had this mentality that we want to create something that evokes emotions but also feels new and special. If it’s already done, make it new. Or if it does not exist, make it! Kartong is the kind of game that by first glimpse looks familiar but when you get past the first layer it changes your perspective. I think what has inspired us the most and what always makes us explore unknown territory is, again, the thrilling idea of creating something new and emotion evoking. We chose to look inwards and ask ourselves what we want to create with this new medium and what emotions we want to explore. I, for example, want the player to feel emotionally attached to, but still curious about, the environment. In comparison to The Deus Helix, Kartong is also more of a casual and social game, perfect to play with your friends or at an arcade. The Deus Helix is more of a longer VR story adventure.

The miniature city of Kartong changes every time you play. Can you explain that? Is it a procedural map? Was that more challenging to develop in VR?

Robert: Yes! The city map of Kartong consists of procedurally generated levels. That allows us to create a world in constant change – something which makes every new game unique (and you will never know the way out of the maze, haha). Also, as a small indie studio, this system makes it possible to generate a lot of new content and game time for our players to enjoy. It was a challenge to develop this in VR, especially considering performance – when everything is randomized it is harder to predict where in the city the performance might go down because of heavy objects. But we’ve been working hard on this issue, and I feel we’ve found a really good solution. 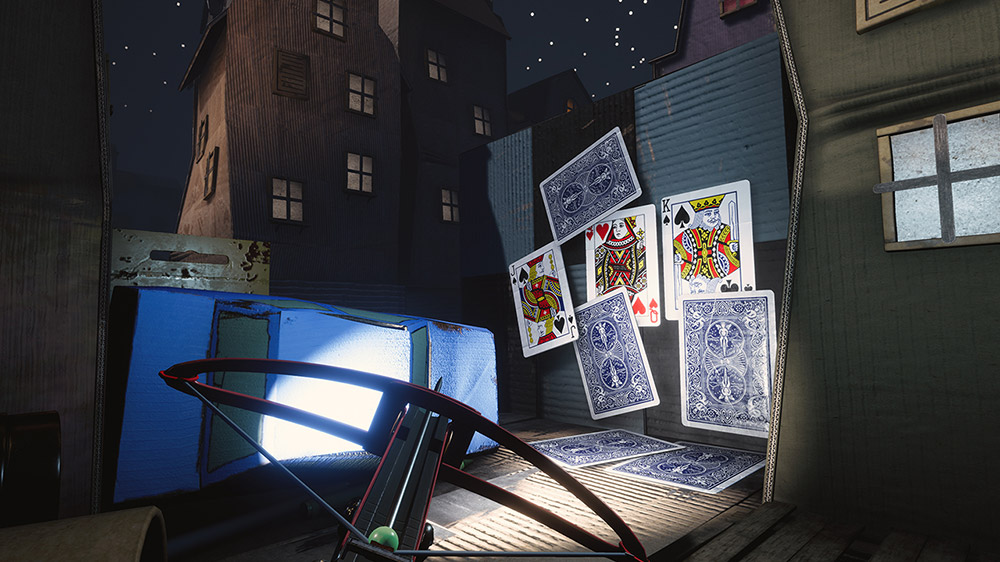 You describe the game as stealth/FPS gameplay… what makes it different from the average game in either of those genres?

Robert: We wanted to offer something different and more approachable than the typical horror wave shooter. We were aiming for a visually stunning world you would like to explore, but we still wanted to include that slightly stressed sensation of being hunted down. We’re combining the cuteness of children’s play with the excitement of getting your adrenalin pumping. Also, we wanted to create a game that allows the player some freedom when it comes to play style. In Kartong you can either speed run each map (while you pretend to be a kickass shooter), or you can use our stealth moving system, invented for Kartong, in order to sneak around the whole city without being noticed.

Let’s talk about the look: clearly, it’s very ‘hand-made’ in style. Did you concept the game with real objects?

Oliwer: Actually yes! Before the actual development of Kartong begun we started experimenting with photo scanned objects in our studio and also made real weapons out of office supplies. You’ll find all sorts of items from our own office, such as batteries, needles, ketchup containers, matches and cans inside the city of Kartong. What sets it aside from other games though, is the modular approach we have to the art, theme and the environment. We have created a system where we easily could build another theme to be generated inside the city of Kartong if we want to. The possibilities are endless and the only limitation is the imagination of our team and our players! 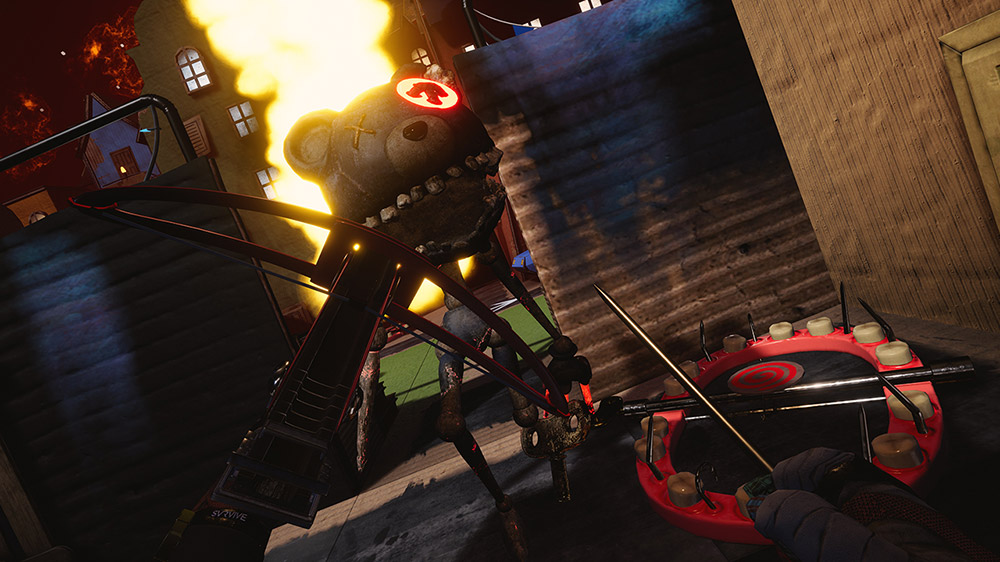 Was everything in the game inspired by real objects, or are some of them completely made up?

Oliwer: We wanted to put a realistic vibe to the city Kartong and fill it with real-world objects, but also giving those objects a somewhat uncanny twist and use them in unorthodox ways. Also, the longer you play, you’ll notice that there’s more to the city than you might think. You’ll eventually find yourself in a place where you’re offered an entirely different perspective on the city and its dangers. We trying to help you give yourself perspective on your “fears” in life, by shifting between realities – sometimes what you perceive as a deadly trap is nothing but stationary, and sometimes tiny led lights can fill your sky as magical stars.

Are there any special ‘physics’ in the game to represent the fact that you’re, well, tiny?

Robert: Both yes and no. In Kartong, ordinary objects are used in new ways, but the physics are kind of the same as in normal life: the objects are just smaller and different. For example, we build a crossbow from a clothes pin and a hair buckle. To figure out the physics, we actually built this miniature weapon for real in our office to see if it would work. We also fired different ammo, including needles and matches in order to see how they would behave. Luckily, no one was hurt haha. Also, the game is still in Early Access, so who knows what crazy physics experiments we’ll add next.

Any special Easter Eggs people should look out for?

Oliwer: With our approach to theme difficulty levels based on players feedback and suggestions, we can guarantee that there will be some surprises similar to the Halloween event, but also new unlockables and skins that enhance the experience even further. We won’t reveal the best easter eggs though, as we want players to find them on their own – but I can say this much:  you might be surprised by what happens if you get a special number combo into the menu´s map seed system 😉

What’s next for SVRVIVE (as a studio)? Any more crazy game jams in the future?

Robert: SVRVIVE Studios is all about exploring and pushing the boundaries of immersive gaming. We started in emotion evoking gameplay and we’ll soon venture onwards into Transformative Gaming, where games provide more value to players than just entertainment. That’s all we’re saying for now!!

Kartong: Death by Cardboard is available in Viveport Subscription.