Curse of the Dead Gods released on Xbox One in February, and since this launch, all of us at Passtech Games have had a fantastic time watching all of you adventuring through our dark temple, getting up to all sorts of shenanigans. We’ve also been working hard on our latest update, the “Curse of the Dead Cells Update”, which we’re about to tell you all about!

The idea of a collaboration with Motion Twin was actually first sparked before the full launch, during the community-supported development of the game, back in October 2020 – what seems aeons ago now. Due to time limits, we chose to prioritize the base Curse content for the launch, which ended up being a blessing in disguise as it let us expand on the content of today’s update.

There are three new weapons in the update: the Broadsword of the Knight, the Sword of Conjunctivius, and the Crossbow of the Condemned, with the latter being a brand new weapon type with a unique cross-combo pattern. With the Broadsword, the second attack and the combo finisher will always score a critical hit. The Sword of Conjunctivius is powerful as hell but take damage once from enemies and you’re temple dust. The crossbow is a slow-firing ranged weapon that does damage in an area around the impact.

Moreover, we have added the iconic Cursed Chest from Dead Cells, with a few alterations. When you encounter it during your runs, you will have to defeat a certain number of enemies without taking damage to unlock its tempting contents: a choice of 3 items (weapons or relics), one of which will always be cursed.

Translating Dead Cells 2D pixel art into Curse of the Dead Gods 3D models was less of a challenge than it might seem, since we had a lot of references from Motion Twin and Evil Empire. The biggest challenge here was the Prisoner’s head, since it was created for a 2D side-scrolling platformer, and Curse has a top-down camera view. We are happy with the results though, and so are the studios behind Dead Cells!

It should be noted that most of us here in the office are huge fans of Dead Cells, so it was super exciting for us. It was also a good fit from a practical standpoint, because both games have a good variety of cool weapons, and both studios have a love for good combat systems. Besides paying homage to a game that marked the decade for us, our goal with the collaboration was to bring some fresh and surprising content into Curse, combining content from Dead Cells with the mood of Curse to create brand new features and weapons. We hope you all enjoy it! 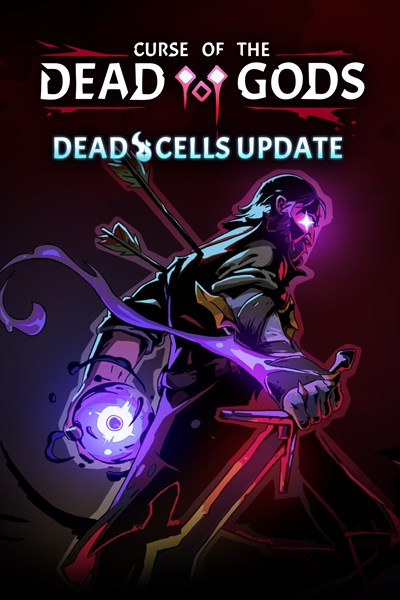 Curse of the Dead Gods

☆☆☆☆☆ 80
★★★★★
$19.99
Get it now
You seek untold riches, eternal life, divine powers – it leads to this accursed temple, a seemingly-infinite labyrinth of bottomless pits, deadly traps, and monsters. Your greed will lead you to death, but that is not an escape. Rise to fight again. Delve deeper again. Defy the malignant deities that linger in this place. Battle through hordes of enemies in dark, cavernous passages filled with traps and secrets of all sorts – fire-spewing statues, explosives, hidden spikes, and worse. Collect mystical Relics and an arsenal of weapons to make yourself unstoppable. Corruption builds in you with every step – encourage or ignore it, but each powerful curse can be a double-edged sword. – A skill-based roguelike exploring a cruel, dark temple made of endless rooms and corridors – Swords, spears, bows, guns – wield these and many more – Unique curses influence each attempt, putting a twist on every action – Dozens of enemies, with powerful champions and deadly bosses to face off against