Have you ever considered a career as a stunt driver? Crash Drive 3 is your ultimate arcade driving playground, where you can take the wheel of everything from race cars and monster trucks to fire engines and tanks! Explore an open world full of larger than life places that are perfect for wild racing and incredible stunts. Drift across ice in the arctic, somersault over the battlements of a forest castle, and much more. You can even take a rocket to visit the moon! Each area is unique and filled with stunt hoop challenges, secrets, collectibles and special Easter eggs.

As you explore the world of Crash Drive 3, competitive events will be announced – everyone in the world can take part… or just keep goofing around! A giant beach ball might fall from the sky, where you earn points every time you crash into it. One player might find themselves crowned king – but how long can they avoid the other players trying to take their crown? Perhaps you’ll be challenged to tag as many bits of scenery as you can by doing stunts on them… there are 10 different game events, with prizes going to the top scoring players. Once an event is done, it won’t be long before another one comes along! We had great fun testing all these different events, and we’re confident you will too!

Spend the cash you earn from exploring and events to customize your ride. Install funky antennas, fancy number plates, and more! You can also use cash to upgrade your vehicles and buy new ones. From school buses and police vans to dragsters and beach buggies, there’s a whole lot of variety for your garage!

Your vehicles will also upgrade as you drive them – want faster top speed? Just drive at top speed! Using nitro boosts will increase your car’s total nitro capacity, and so on… if you reach the highest player level possible, you might even be able to get a solid gold car.

Have a Blast in Tank Battles

Yep! There are also tank battles in Crash Drive 3! We knew we wanted tanks in the game, and they’re such exceptional vehicles that we knew they deserved their own game mode. Engage in airborne tank battles atop the sky arena! Smash your opponents off the platform or use your cannon to score points and dominate! Success will earn you new cash, which can be used to unlock new tanks. There are 10 in total, with different types from light tanks to brawlers, each having a unique play style.

Play Solo or with Friends

We wanted Crash Drive 3 to be as easy as possible to get into, and we wanted to make a game where we could play with friends anytime. Thanks to the magic of cross-platform multiplayer, we’re happy to say that no matter which device they use, you can play with any of your friends! We even put in a feature so that if you get online connectivity issues, the game will seamlessly switch into the fully featured single player mode so you never have to put on the brakes.

So what are you waiting for? Get ready to start your engines when Crash Drive 3 comes to Xbox One and Xbox Series X|S on July 8 — there’s a giant beach ball falling from the sky, and it’s got your name on it! 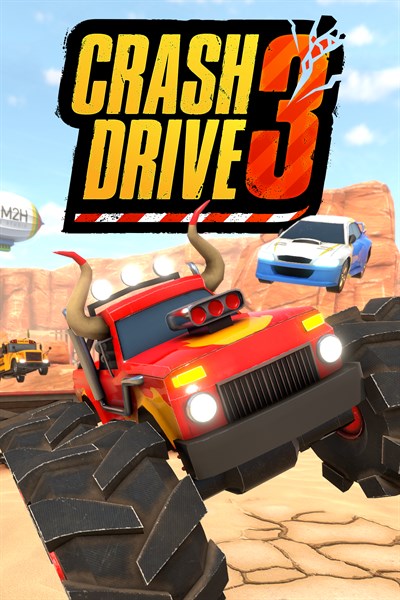 ☆☆☆☆☆
★★★★★
Get it now
Xbox One X Enhanced
Are you ready for THE car stunting playground? Experience ridiculous fun in this cross-platform multiplayer, free-roaming game! Drive monster trucks, tanks and more amazing vehicles across a huge open world. Level up, play events, earn cash, unlock new cars and discover secrets…. Crash Drive is back! COMPETITIVE EVENTS Destroy a gigantic beach ball, catch robbers as a cop or steal the king's crown, these are just a few examples of the 10 fun game events this game has to offer. Participate in these random competitive events, beat your opponents to earn the most cash and buy awesome new cars or customisations. CRAZY CAR LEVELING By using nitro boosts you increase the car’s nitro capacity, by driving at top speed you increase its top speed… catch the drift? ‘Maxing’ all stats for a car increases your player level allowing you to buy new cars or customisations. Collect over 50+ vehicles and customise your car with funky antennas, boosts and unique number plates with your in-game name on it. Reach the maximum player level to prestige and show who is the real Crash Drive 3 boss! Solid golden car anyone? OPEN WORLD EXPLORATION To the moon and back! Drive around freely and explore the boundless and varied open world at your leisure. Fly a rocket to the moon, storm the king’s castle in the forest, go to the saloon in the wild west canyons or experience ice drifting fun in the arctic snow. Done with icy cold? How about a relaxing ferry trip to the tropics? Each area is unique and filled with secret areas, collectibles and special easter eggs… Think you’ll ever be done exploring this world? HAVE A BLAST IN TANK BATTLES! Blast or crash opponents from the sky arena to score points and dominate the battle arenas. Win in order to buy new tanks each with a unique play style. You will have a blast in the exciting tank battles mode! PLAY WITH FRIENDS ON ANY PLATFORM! No matter which platform your friends play on, you can always play together thanks to cross platform multiplayer support. Or if you want to do some stunting offline, switch seamlessly to a fully single player experience anytime you like!

Related:
The Dungeon of Naheulbeuk: The Amulet of Chaos is Now Available on Xbox One
Alchemic Cutie Launches for Xbox One and Xbox Series X|S on July 27
Infinitrap: Rehamstered Now Available