Confront Rivals in Vigor – Season 3 on Xbox One | Blogdot.tv

We decided to bring some fresh air into post-war Norway and have a ton of new stuff for Outlanders old and new alike. Since the very beginning, we were teasing bits and pieces of things to come, and now is a good time to bring them in. Brace yourselves for the addition of the long-awaited facewear, reworked stash UI, and a new seasonal game mode. Together with those, we also focused on long-standing inconveniences and improved the overall stability.

Vigor‘s third Battle Pass season is called Rivals and there’s a good reason for that. Life in the Outlands shows the best and worst in every person – there are those who try and uphold the laws of society, and lawless bandits who do as they please. Remnants of state order still fight against less organized forces of chaos. Outlanders are now able to show their allegiance to these rivals, or decide to stand aside and watch the fight. Would you take a police uniform with a hat, or rather stick to balaclava and civil clothes? Or would you rather be a biker roaming the Outlands on your own? There are a ton of various choices, and you can display your preference in the customizations. Your choice matters, even when selecting how you would like to fight in post-war Norway.

Rivals keeps the Encounters, yet adds a new seasonal game mode – Shootout. While standard Encounters focus more on looting, Shootout clearly aims for the shooting part of the experience. Pitted on a small area of a new Sawmill map, Outlanders find themselves in a fierce battle against each other, scoring points for kills. Seasoned veterans can try something new and fresh while new Outlanders are able to learn gunplay more efficiently. And it even helps us, the developers, to flesh out the combat mechanics of the game. Shootout matches last for ten minutes and showcase pure skill, rewarding competitors with precious food and Battle Pass XP. We aim to have Shootout exclusive for the Rivals season, but we may reconsider this based on Outlanders’ feedback, indeed.

While Shootout may be a good place to try new weapons, Encounters are the place where they really shine. We added a trio of silenced weapons to allow more stealthy gameplay styles. Be it a PSS as a nice sidearm to finish an ambush, a close quarters battle-specialized MP5-K SD3 submachine gun, or a marksmen’s beast SVU (silenced brother of SVD), all the new weapons allow sneaky and silent eliminations. You can customize them in two season-specific variants in addition to standard skins – orderly clean or borderless freedom ones. And even the newly added facewear customizations allow such choice – would you fancy your goalie mask new and shiny, or rather old and rusty? Facewear finally adds more customization options you can show off in the lobby.

The new season comes with a pair of new consumables as well – you can use your wits to get more tactical advantage in the Outlands yet again. New Caffeine tablets allow you to sprint without draining stamina, which may be crucial while trying to get to the airdrop in time. On the other hand, Iodine tablets stop the radiation effects on your body for a short while, allowing you to stay in the Outlands for the crucial periods of snatching the airdrop at the very last possible moment.

To get the plans for the new consumables, you need some progress in the Battle Pass season. And as we are speaking about Rivals, it only makes sense to add several new activities awarding precious XP – wreak havoc as a Threat, revenge your fallen Duo partner, or make the Outlands Threat-free once again and protect your Duo partner until the end, the choice is yours.

All these new additions wouldn’t be possible without your ongoing support. We are more than happy to listen to your feedback, as it always helps us to shape the game. We are taking steps to make the Vigor community even larger and more active, and we are looking forward to what you have to say about the new seasonal game modes. Be safe in real life and see you in post-war Norway. 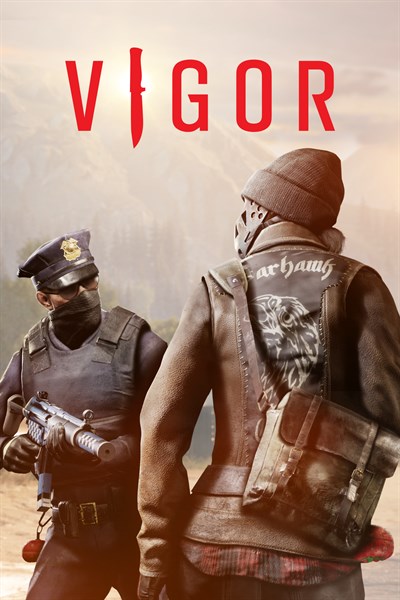 ☆☆☆☆☆ 615
★★★★★
Get it now
Xbox One X Enhanced
Vigor is a free-to-play shoot 'n' loot game where you build the Shelter in post-war Norway. * Shoot your way out of encounters for 8-12 players * Loot precious resources and valuable items * Build your shelter and vital equipment * Become the courageous Outlander in post-war Norway The nuclear war is over. Europe is devastated, Norway has become the last stand. You start as a nameless Outlander, but who will you become? No time for uncertainty. Shoot your way out or don’t fight at all. Loot, gather resources, take risks. Build your Shelter and vital equipment. Humanity has fallen… You shall rise.