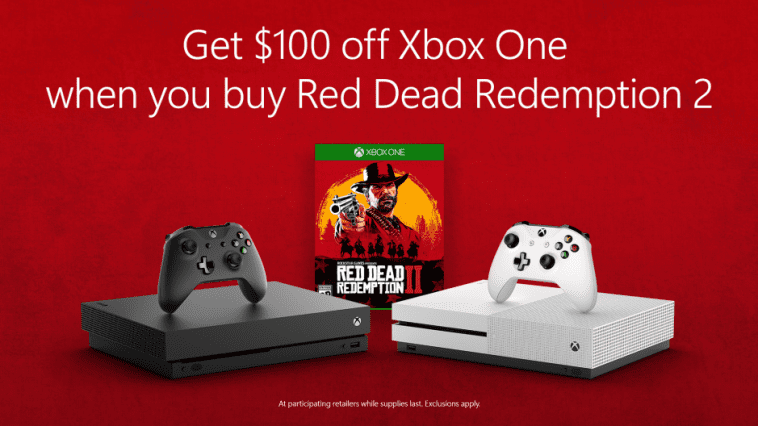 Red Dead Redemption 2, an epic tale of life in America at the dawn of the modern age from the creators of Grand Theft Auto V and Red Dead Redemption, is now available across the Xbox One family of devices, including Xbox One X where gamers can experience the amazing old west in native 4K and High Dynamic Range (HDR).

To celebrate, Xbox is offering an amazing deal in the U.S. and Canada on Xbox One consoles, available at participating retailers, including your local Microsoft Store or online, starting today.

With this deal, you’ll be ready to immerse yourself in the world of Red Dead Redemption 2. After a robbery goes badly wrong in the western town of Blackwater, Arthur Morgan and the Van der Linde gang are forced to flee. With federal agents and the best bounty hunters in the nation massing on their heels, the gang must rob, steal and fight their way across the rugged heartland of America to survive. As deepening internal divisions threaten to tear the gang apart, Arthur must make a choice between his own ideals and loyalty to the gang who raised him.

Play over 3,000 games on the only consoles designed to play the best games of the past, present, and future. Enjoy 100 games right out of the box with Xbox Game Pass, and access all your favorite entertainment through apps like YouTube, Netflix, and more. Watch 4K Blu-ray movies and stream 4K video on both Xbox One consoles and experience immersive true 4K gaming on Xbox One X, the world’s most powerful console. Whether you’re playing games, watching your favorite shows or streaming gameplay, Xbox One delivers brilliant graphics with HDR technology, premium audio, and the fastest, most reliable gaming network.

Related:
A Beginner’s Guide to The Long Journey Home on Xbox One
Xbox, Bethesda, and Hypemaker Partner on #HelmetsForHabitat
Prepare to Die in Zombie Survival RPG Skyhill on Xbox One