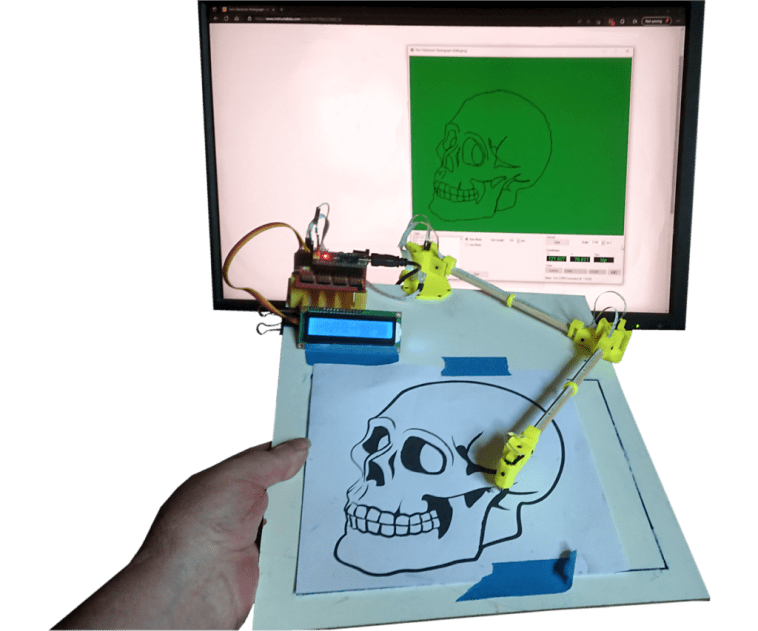 A pantograph is a machine that lets an artist copy an image by tracing the original. Traditional mechanical pantographs use a complex linkage system to move the output pen relative to the stylus. While 1:1 pantographs do serve a purpose, the real value comes from a pantograph’s ability to scale the output. It is possible to create an output drawing several times the size of the traced image and also to do the opposite, which is particularly useful for fine engraving work. Mechanical pantographs are now niche machines, but this tutorial will walk you through how to build an electronic pantograph using an Arduino and Hall effect sensors.

With some simple trigonometry, the Arduino can use the joint angles and arm lengths to calculate Cartesian XY coordinates. A push button on the input stylus lets the Arduino know when the user is tracing a line or when they are moving between lines. The Arduino then outputs the traced lines as a series of G-code commands, like what a 3D printer or pen plotter works with. A simple GUI interface displays the traced image and the user can configure the scale and resolution. To produce a scaled output, the user can either print the image or send the G-code to a pen plotter. This electronic pantograph does have practical applications, but it is especially useful as an educational project to learn the fundamentals of Hall effect sensors, analog inputs, and applied trigonometry.