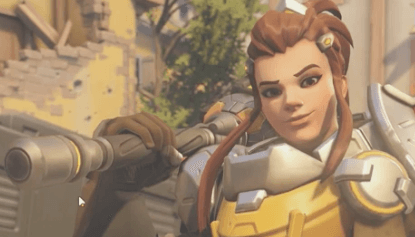 Overwatch‘s 27th character, Brigitte, is coming to the game for everyone across PS4, Xbox One, and PC on March 20, developer Blizzard announced today. Brigitte, who is Torbjorn’s daughter, is already available on Overwatch’s Public Test Realm.

Brigitte is an “an engineer with peerless armor-constructing abilities,” and those characteristics shine through in her abilities on the battlefield. Her primary weapon is the Rocket Flail, which has an extended range and can smash multiple opponents at once.

In addition to that, she brandishes a Barrier Shield, which can protect any teammates directly behind her. She can also toss Repair Packs to heal teammates, while her passive ability, Inspire, heals nearby allies over time when she lands blows on enemies. A full list of her abilities, as outlined by Blizzard, follows below.

For more on the newest Overwatch hero, you can check out a lot of footage from the PTR here or watch Brigitte’s origin story trailer here. You can also learn more about her in the latest Overwatch developer update and read about Brigitte’s backstory and special abilities here. Like other Overwatch characters, Brigitte also has a lot of alternate skins–you can see them all here.