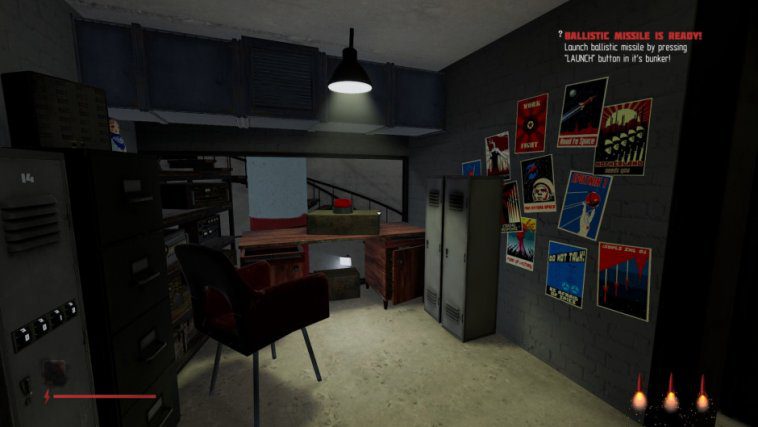 We got the idea of Boris the Rocket from a dream our programmer had. He dreamed of a Soviet instrument panel. So, we met up, put our heads together and came up with a general concept after everyone pitched their ideas. We saw the importance of design documents after our work on Black Baron when we’d parted ways with our game designer and had to go back to square one. I should probably mention how we built our team.

In 2009, I met the guys when I started playing World of Warcraft. The next year, they invited me to play Project Reality, a Battlefield 2 mod, and by 2013 we started a clan. There were around five of us, then more people joined in, then some switched to ARMA 2, created a squad made up of those team members who left the mod and called it TOR (Tactics Over Rules). So, we kept on playing, raised our skills together, graduated from colleges as we went along, found jobs etc. Then in 2018 I got tired of working in my field, so I decided to try my hand at 3D. By then one of us had been coding in 1C, so we thought why not make games. And that’s how we got into game development.

Our conference calls were never something strictly work-related. It’s our daily routine, it’s part of our life. We used to play together, but now we also work together, and I think it’s pretty awesome.

Back to Boris the Rocket, at first we thought of the isometric view, you know to add trucks and get them to deliver rockets to the bunkers, but when we saw what Boris’s belly looks like from the first-person view, we changed our mind and switched to FPV completely.

Oh yeah, about that belly, it really is something. It’s my pride. I mean, have you seen it? It looks so real. As for game features, it’s worth noting its replayability. In fact, every time you start the game, you see small details you did not notice before, and the more you play, the more they catch the eye. When you’ve completed the game, it gets a little faster each time, so it’s a time manager of some sort.

You must be on your toes all the time, try not to waste a single second, which will really help you in the future. To give one example, it’s worth making condensed milk as often as you can, it will come in handy. In fact, at later levels it will be a life saver. It regenerates stamina, so after you cook it, it appears on the tables in the canteen so you can grab it when you need it. The better result you get on level completion and the fewer mistakes you make (if any), the better loot you’ll get – look out for those USSR packages they drop for you.

We also had this idea with the bear dancing to balalaika. Whenever the bear attacks, you play the balalaika to charm him like a snake. The game was actually supposed to have more hackneyed stereotypes, but in the end we narrowed it down to what you see in the final version.

Indie Cup streamers and the community gave us positive feedback, which wasn’t something we’d expected, and we’re grateful to them.

All in all, Boris the Rocket has been our third game in three years, and every new project we release gets better than the previous one. I’m really thrilled to see the team grow and develop. It’s definitely an upward trend for us and I can’t be prouder of our achievements.

☆☆☆☆☆ 2
★★★★★
$14.99
Get it now
BORIS THE ROCKET is a simulator of a moustached Cold War Soviet missile operator. You will have a chance to defend your vast Motherland single-handedly. You will have to withstand freezing weather and nasty bear intrigues while slurping condensed milk to survive and adapt to the rapidly changing environment. Full immersion in the dramatic atmosphere of the Cold War. These are the times when duty to your country is more important than your own opinion. Even your mortal body belongs to the State. Only under such conditions can people truly become real heroes and patriots of their homeland. Do not let Mother Russia be ruined! Do or die! Death itself is not a good enough excuse for a Soviet man!

Related:
Five Reasons Why Angels with Scaly Wings Could be Your New Favorite Narrative Adventure
Second Extinction (Game Preview): What to Know Before Taking Earth Back from Mutated Dinosaurs
Fight Your Friends in the Fast-Paced Shooter Cymatically Muffed