Borderlands 3: Hands-on with the Most Borderlands Game Yet | Blogdot.tv

The skyline is decorated with massive buildings and neon lights. Vehicles that look like giant rings roll through darkened city streets. One thing’s for sure: We’re not on Pandora anymore. This is Meridian, on the planet Promethea, and it is one of many new locations in Borderlands 3.

The first two primary games in the Borderlands series were set on the scorched and barren surface of the planet Pandora, with players cast as treasure-seeking Vault Hunters. While Borderlands 3 begins on the same planet’s surface, it soon blasts off for new horizons, with a host of new planets to explore — and a billion possible weapon combinations with which to blow those new locations all to hell. I recently spent about 90 minutes playing Borderlands 3; here’s what I learned.

A New Cast of Characters

The hands-on event focused on the single-player campaign, which Creative Director Paul Sage estimated would take at least 30 hours to complete. Players choose one of four characters, each of which has three action skills to unlock and equip, and a whole host of augmentations to offer buffs, special attacks, and elemental damage options.

To sketch in the story, we know that Lilith from Borderlands recruits the player to hunt down a new cult called the Children of the Vault. The CoV, as they’re often called, have a map to hidden vault locations across the galaxy. Lilith wants you to track them all down to smash the CoV recruitment campaign. The upshot is that you get to score a massive load of loot along the way. 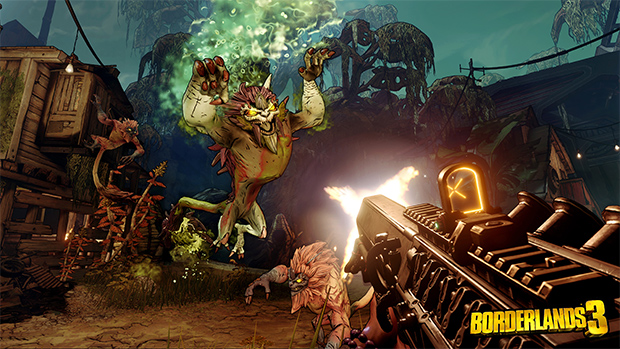 Playing as Amara, a Siren, I was dropped into the outskirts of Meridian and told to find the Atlas organization. As in previous games in the series, exploration isn’t exactly the point — waypoints are clearly marked, and are goals stated in a way that is impossible to miss. The idea, ironically for a treasure-happy Vault Hunter, isn’t to feel like a genius for finding some hidden trinket; it’s all about staying alive.

Even More Borderlands Than Before

So, about that. At this point, Borderlands 3 looks like a terrific example of a game that has been energized without changing the core dynamics. The action is still all about shooting a wide variety of guns, with wildly varied behaviors and effects, depending on which in-game company manufactured each one. (More on the guns in a moment.)

In previous games in the series, players were typically Earthbound. (Or, uh, Pandorabound?) This installment features new actions, such as sliding and mantling, which are old hat for other shooters, and which emphasize the option for vertical movement. Or, to put it another way, there’s more climbing than ever before. But just as exploration isn’t the point of the game, breaking new ground isn’t what developer Gearbox Software is here to do. Instead, there’s a clear emphasis on making something that is more Borderlands than ever before.

My Borderlands skills are rusty, and 90 minutes was hardly enough time to master the new game, but moving through these environments, which are well-designed arenas with multiple vertical levels and plenty of cover, was fluid and oddly even graceful.

There’s more interaction with the world, too. Even my relatively short run through Meridian and its outskirts highlighted that these maps have more stuff to destroy, starting with the cover enemies (and players) hide behind. Barrels can be knocked around and thrown — which, given the action skill powers of several players, especially the melee-focused Amara, should be a constant part of combat — and environmental options to deal out damage, such as pools of oil and broken pipes that cascade fountains of radioactive material. 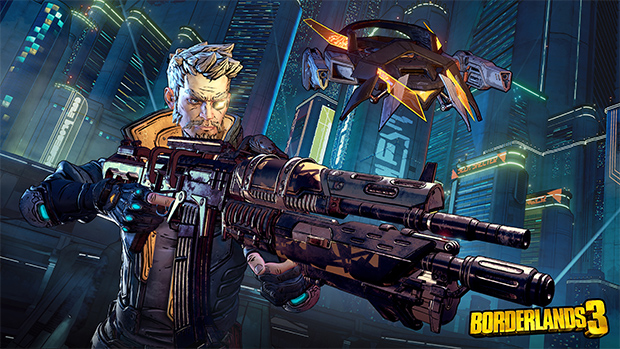 Even with some new movement options, Borderlands 3 relies on strength of its weaponry. In that respect, it probably has nothing to worry about. One thing I noticed immediately is that a lot of the cheap, lousy guns of the first two games are gone. Even the basic weapon loot is usable in a pinch.

There are some aiming assists enabled for all players. Rather than making the game too easy, they ensure that you can do all the running, jumping, and sliding about that you want and not have to practice for 20 hours just to be able to hit an enemy. The aiming systems add to a sense of fluidity, and that’s a pretty good feeling. And the guns made by Atlas have tracking tags which, when attached to targets, will attract smart bullets that will curve around cover to deal damage.

There’s already been a good deal of talk about the evolved Tediore weapons, and for good reason. They’re the bizarro idea that really set Borderlands 3 apart. Previously, you could throw a Tediore-made gun away and it would act like a grenade. Now these guns have a wide variety of unusual effects. One might set up as a turret when thrown — which is a lot more useful than weird, especially if you’re not playing a character who has a skill to place turrets — while another will bounce through the battlefield, firing of its own accord. Silly? A little bit. Chaotic and fun? Very.

Other guns have alt firing modes, and I got a lot of mileage out of a Dahl SMG that could flip between fire and radiation elemental damage. There are probably some enemies which can resist both, but I didn’t find them in this session. As a fan of nailing mobs with elemental damage, then moving on to new targets while the old ones are withered beneath flames, that SMG immediately became a reliable favorite. Also nice was the Hyperion shotgun that deploys a solid shield when I aimed down the barrel sights, thereby allowing me to act like a tank for brief sprints towards enemy mobs. 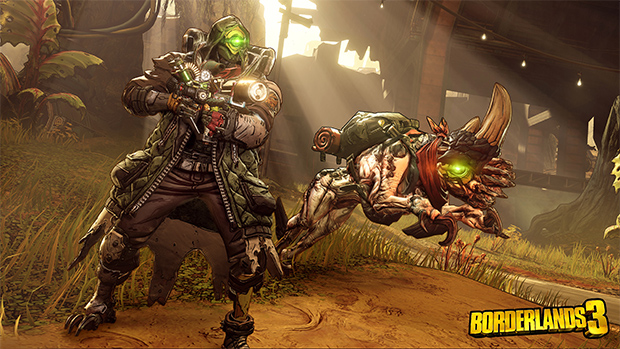 I hadn’t been on the surface of Promethea long before I got to drive one of those big single-wheel vehicles — a Cyclone — through the streets of Meridian. It seems like driving mechanics have changed the least. You’ll still push forward with the left stick and steer with the right. But the collision detection seemed a lot more forgiving than in previous games, and the Cyclone, at least, can turn on a dime.

More Details Yet to Come

Because my gameplay session was entirely a solo affair, I didn’t get to see some of the most-anticipated features of Borderlands 3. An on-stage demo controlled by developers showed the instanced loot system in action, which will allow players of different levels to play together and receive their own individual loot rewards, but I didn’t get to experience it.

My playthrough also gave only a hint of the depths of the skill tree. I could see all of Amara’s locked skill options but was only able to access a few. And while I got to begin looking at a couple side missions, there wasn’t enough time to delve into that aspect of the single-player story.

There’s a lot more to be revealed about Borderlands 3, starting with whatever Gearbox has planned for the multiplayer game, and stretching into all the new bosses, surprise NPC appearances, and literally millions and millions of guns. We’ll know more at E3, and the stream of new information will keep flowing until Borderlands 3 arrives on September 13.