With Blackout’s PS4 private beta hitting later today, I sat down with Blackout design director David Vonderhaar to learn more about Treyarch’s plans for one of the biggest gameplay shakeups in Call of Duty history.

PlayStation.Blog: Okay, about those wingsuits…

David Vonderhaar, design director, Blackout: The franchise has actually done wingsuits before… this is our homage. You have a lot of control. You have flat-fly, air braking. You can dive as hard and as fast as you can, and pull back… you feel like a badass. You can also base jump. You can go to any tall place, like the Dam, and base jump off it.

PSB: There is a machinegun of references woven throughout the entire trailer, many from Treyarch history. Is this a love letter to Black Ops history?

DV: We’re making a giant map. We want to create a bunch of new experiences. We’ve never seen engagement ranges this long before. And, when you get to locations on the map, it’s nice to draw on things players love from the Multiplayer experience or the Zombies experience.

“You can go to any tall place, like the Dam, and base jump off it.”

One example: if you go inside Estates (the location in Blackout, based on the multiplayer maps Raid and Stronghold from previous Black Ops games) it’s like being in Raid, but it’s part of a bigger world. Now there’s stuff located outside of Raid. You can go on the roofs, which weren’t even shown [in the original Multiplayer map]. It’s like a more complete version of Raid in many ways than before. It’s a lot more expansive, and just one part of a giant map.

DV: You go to Nuketown Island. Nuketown has always had bunkers. In game developer terms, the bunker was a way to provide cover. So we looked at those bunkers and said… “what if you could open the door? What if you could go into the bunkers?” So we’ve got Nuketown, but it’s not just Nuketown.

PSB: How is Treyarch building out the open-world map? Does the team start by dropping in the original Multiplayer maps?

DV: We pay homage to that stuff. There’s no world where we pick up a multiplayer map and drop it into a giant map [Blackout] that’s 1500 times bigger than Nuketown and have it be the same thing. You can’t just copy and paste maps from earlier games —there have been so many improvements to support Blackout.

But hey, I wish it was that easy. We’d be done by now!

PSB: What was the first thing you built in the Blackout map?

DV: The scale of the world from left to right, up to down. Basically it was a giant terrain map using a new tool we had…. [in terms of the first location], it might have been the Fracking Tower. 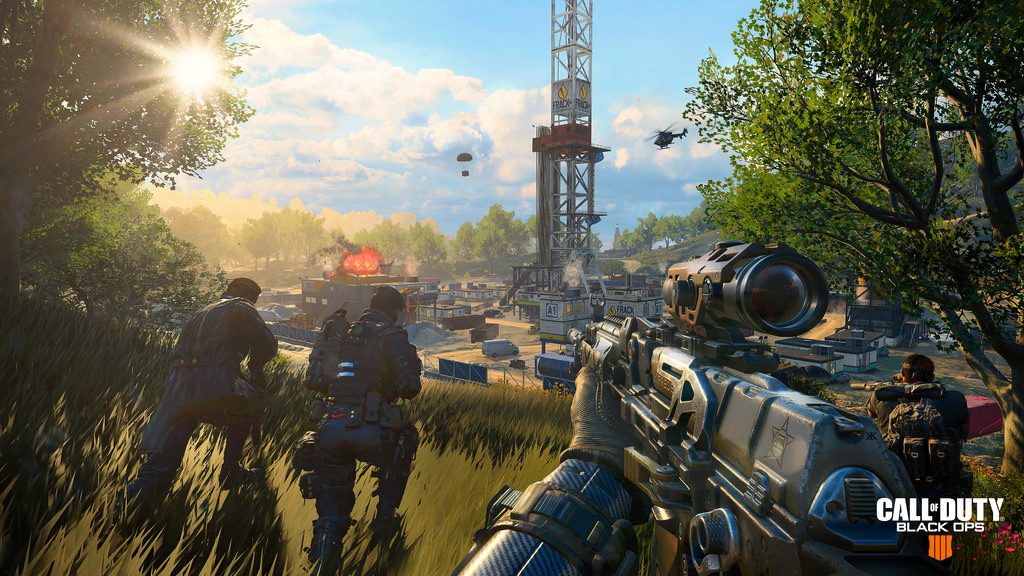 PSB: We see driveable ATVs, helicopters, boats… why was this the right time to add driveable vehicles to Call of Duty?

DV: On the Multiplayer side, we’ve had small vehicles, or Scorestreaks where the player can remotely control it. But you’re not usually piloting vehicles. Blackout allows us to give that experience – people like flying helicopters and driving ATVs. And Blackout is the perfect place due to the size of the experience.

What we’ve shown in the trailer is an ATV, which is small, fast, and fits two people. We’ve got a cargo truck, which fits multiple people – maybe four or five people total… more, really, if you want to stack people in. I’m sure we’re going to see some fun clown cars.

Then we have a helicopter, which can sit four people on the edges, plus the pilot. And we have a boat, a two-person tactical river boat with an outboard motor.

That’s the starting ground. I think we’re just getting started with the vehicles – we want to get the right ones, in the right order. There are a lot of places we could go with vehicles. I think we could do some amazing things in the future here.

PSB: Tell us a bit about sniping in Blackout.

DV: In our community, there’s this class of sniper in Call of Duty who are really good at close-range sniping. But traditionally, Multiplayer maps haven’t really had you at long enough engagement ranges where you had to actually snipe at long ranges. Blackout has ballistics, which are tied to the caliber of the bullet. Speed, trajectory, and distance, and the power of that bullet [all factor in].

We saw a glimpse of a Monkey Bomb, the Asylum… how much Zombies lore will be present in Blackout?

DV: In Blackout, we don’t drive you to the narrative of the new Zombies universe – that’s what Black Ops 4’s Zombies experiences is for. We do draw on 10 years of Zombies experiences… if you made the most classic Zombies from all the games, that’s the type of feel we’re creating in Blackout. We pay homage to the lore, including things like Mystery Boxes. Zombies fans will notice the references.

I saw a lot of recognizable weapons in the trailer…

DV: Most of the weapons in Blackout are from Black Ops 4 Multiplayer. There are some very classic weapons from our past coming to Blackout as well. And, there may be some Zombie-referenced weapons too… we took a little liberty with the rulesets.

PSB: Will functionality of the weapons will be in generally the same ballpark as Multiplayer?

DV: Good question! The attachments in Blackout do work differently than they do in Multiplayer. The core weapon, its core principles, are identical to the rest of the game. But the attachments, and what value they add, are not the same as Multiplayer.

“Not everything is created equal… And you gotta find the good stuff.”

In Multiplayer, everything has to be equal value – the ACOG scope has to be as good as the Red Dot scope, and so on. But that’s not true in Blackout. There are two types of magazines for weapons, two types of barrels, two types of body parts – not all weapons have all those parts.

What was your philosophy in designing the different destinations?

DV: Every destination is different, and has its own strengths and weaknesses. If you’re good at being enclosed and having ranged battles, you might like Turbine. You can run down the line and grab items quickly, but you’re very exposed because you’re in a giant warehouse. Or you can loot in peace out on the turbines.

If you go to Firing Range, there are more weapon-related items there, but it’s in the dead center of the map so everyone’s gonna be there. Zombies locations may have zombies… construction sites have verticality.

You’re going to have spots you like to drop into, but when you want to change up your gameplay, you’ll drop in a different spot. If you need a break, if you keep dying early, you might decide to go to the Lighthouse. It’s off the beaten path, but nobody else will be around.

The destinations are about mixing up your experiences. We always ask ourselves: what can we do to allow players to choose how they engage in this world?