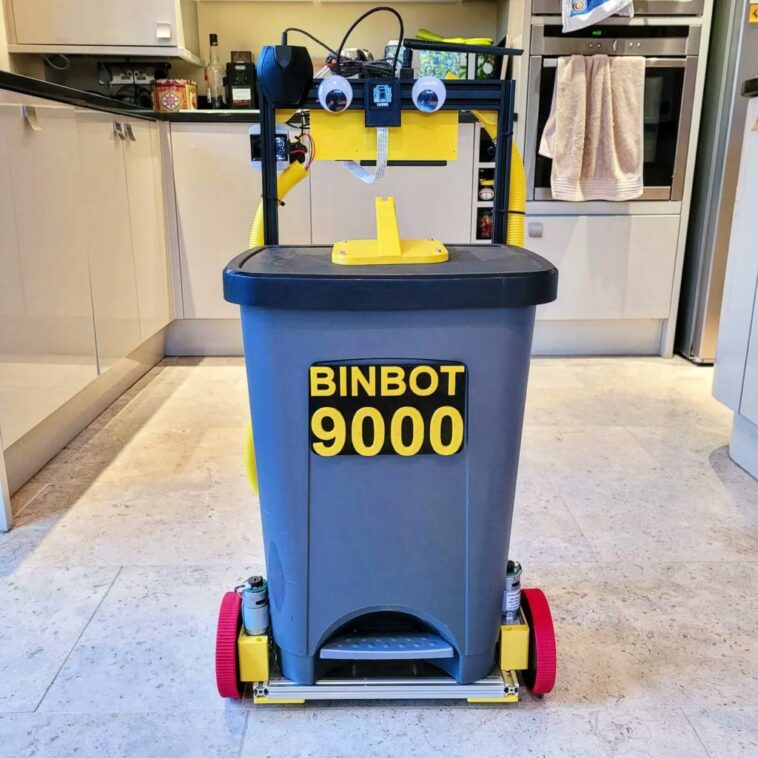 Our modern societies create a lot of garbage, which we can fortunately remove from our homes thanks to local waste management services. But the garbage people won’t come sift through your house for refuse, which forces you to utilize trash bins. Those bins never seem to be nearby when you need them, which is why James Bruton built the Binbot 9000.

The Binbot 9000 is exactly what it sounds like: a robotic trash can. No longer must the bin remain stationed in some out-of-the-way location. Instead, Binbot 9000 can drive around a home in search of people who need to throw things away.

Bruton started by placing a standard trash can on a robotic frame built using aluminum extrusion and 3D-printed parts. It has two drive wheels with encoders, which an Arduino Mega 2560 controls. To navigate through the home while avoiding collisions, Bruton added an NVIDIA Jetson Nano single-board computer and a Raspberry Pi Camera. The Jetson runs computer vision software and feeds commands to the Arduino via serial.

The computer vision software looks for simple targets printed on sheets of paper. The robot rotates until it sees and centers a target in the video frame. It will then drive forward until it reaches the target, rotates 90 degrees, and repeats the process. If it collides with something (ideally someone’s foot), the wheel encodes will detect the stall and the robot will open its lid with a servo. After someone deposits trash and closes the lid, the robot will go back into its target-seeking cycle.

By placing targets in strategic locations around his home, Bruton gave Binbot 9000 the ability to drive around his home in efficient paths. Whenever he needs to throw something away, he can nudge the robot to stop it and deposit his garbage. It also responds to voice commands, so Bruton can summon it or send it home as needed.

The post Binbot 9000 moves to where the trash is appeared first on Arduino Blog.