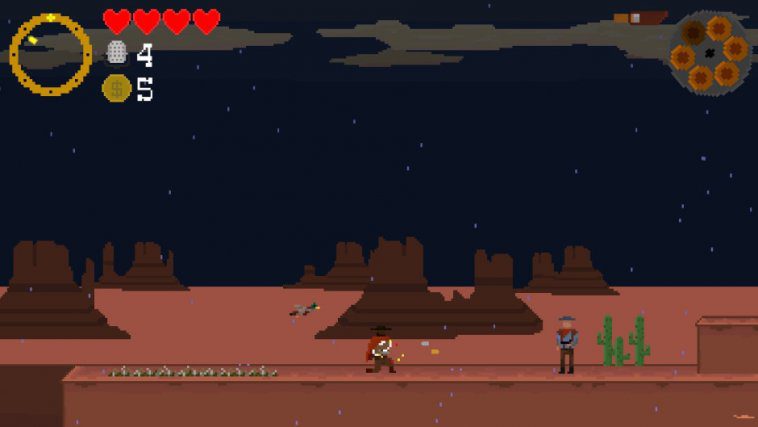 Luckslinger is a challenging action platformer with a luck mechanic and a hip hop soundtrack. The gameplay is challenging, making you savor every health point you have. It’s all about keeping your head cool in hot situations. And looking stylish while doing so.

I’m Donald, the game designer of Luckslinger. Our studio consists of a team of 3. After creating several smaller games we knew we wanted to create something bigger. A full game instead of small demo type games. So we came together and went through the game idea notes we had, looking for something we liked.

This is where the line “a game about luck” came up. It was written down probably a year earlier but never used. We thought we didn’t really know any games that focus on luck being an actual game mechanic. So we started thinking about what we could do with it, we decided on an action platformer with a western theme. Mostly because we felt this time period had much to do with luck, especially the harsh environment and the search for gold and riches. But also because I really wanted to deep dive in the spaghetti western film genre and watch as many as I could for inspiration.

After working on a prototype for about a week or two, the gameplay started taking shape. But overall it was missing something. It was a little bit boring and needed some punch. All 3 of us being hiphopheads, we worked on it while listening to hip hop, somewhere we must have been playing with a nice track in the background because suddenly it all fit. It felt really cool and fresh to us. We knew the anime Samurai Champloo could do samurai and hip hop, so we felt that we can do cowboys and hip hop. And so the main idea was born.

With the game in a good state we uploaded the PC version to Newgrounds. Where we got lots of cool and useful feedback. Enough to convince us that we were creating something fun. So we kept going. We visited many conventions and get-togethers in The Netherlands and some in Germany. We were invited by Indiecade to showcase on E3, so we did. It was a really amazing time but also insanely busy. It went by fast! Seeing people play our little creation was wonderful. At E3 I even got to meet one of my heroes, Warren Spector (the director of the original Deus Ex).

After releasing Luckslinger on PC we did some patchwork and we started working on a new project. This is when 2Awesome Studio (which we had met at the events) talked to us about creating a console version. And here it is!

We hope you dig it. We certainly enjoyed creating it, and seeing people experience it.

☆☆☆☆☆
★★★★★
$9.99 $7.99
Get it now
In Luckslinger, you'll be stealing your lucky stars – be sure to spend them wisely! Partly inspired by the unrealistically fast gunslingers, the dark gritty humour, and the greed driven anti-heroes of the spaghetti western classics. Wholly inspired by vinyl digging, graffiti spraying, rhyming, and the slow jazzy drum samples of hip hop culture and sound. Are you feeling unlucky? In Luckslinger, ride the west of bandits, steal their luck, and use it for your own good. The more luck you have, the more chance you have for bullet evasion, better loot at your feet, and staying alive. However, when you're ""down on your luck"" in your trusty bracelet, bridges collapse, rocks tumble, and outlaws might know where you're sleeping that night. In Luckslinger, we rely on the luck of the draw. Clovercreek and the crazy outlaws – The town of Clovercreek has been robbed blind. Six infamous criminals stole the town’s precious luck charms and it’s up to you to bring them back. Get paid the golden price while doing so, because bounty hunters don’t do charity work. Duck friend till the end – At all times you are accompanied by your companion Duckbridge. He returns your throwing knife, grabs extra health and distracts your enemies… but only when his tiny little duck brain tells him to do so.