EA has revealed the next iteration of its massive multiplayer shooter series. Battlefield 2042 launches later this year on October 22 with development handled by Dice, Criterion, Dice LA, and EA Gothenburg. Coming to both PS4 and PS5, it continues the series’ ambitious trajectory of incorporating cutting-edge tech to increase the size and density of its sandboxes, while retooling and expanding its vast armory of gameplay modes and mechanics. It boasts one of the biggest maps in the series to date. The real-time unpredictability of extreme weather systems that’ll tear through the frontline. Enhanced terrain deformation. And, on PS5, a 128-player count per match. This is Dice’s proprietary game engine Frostbite flexing all-new processing muscle acquired in the two or so years since last entry Battlefield V. 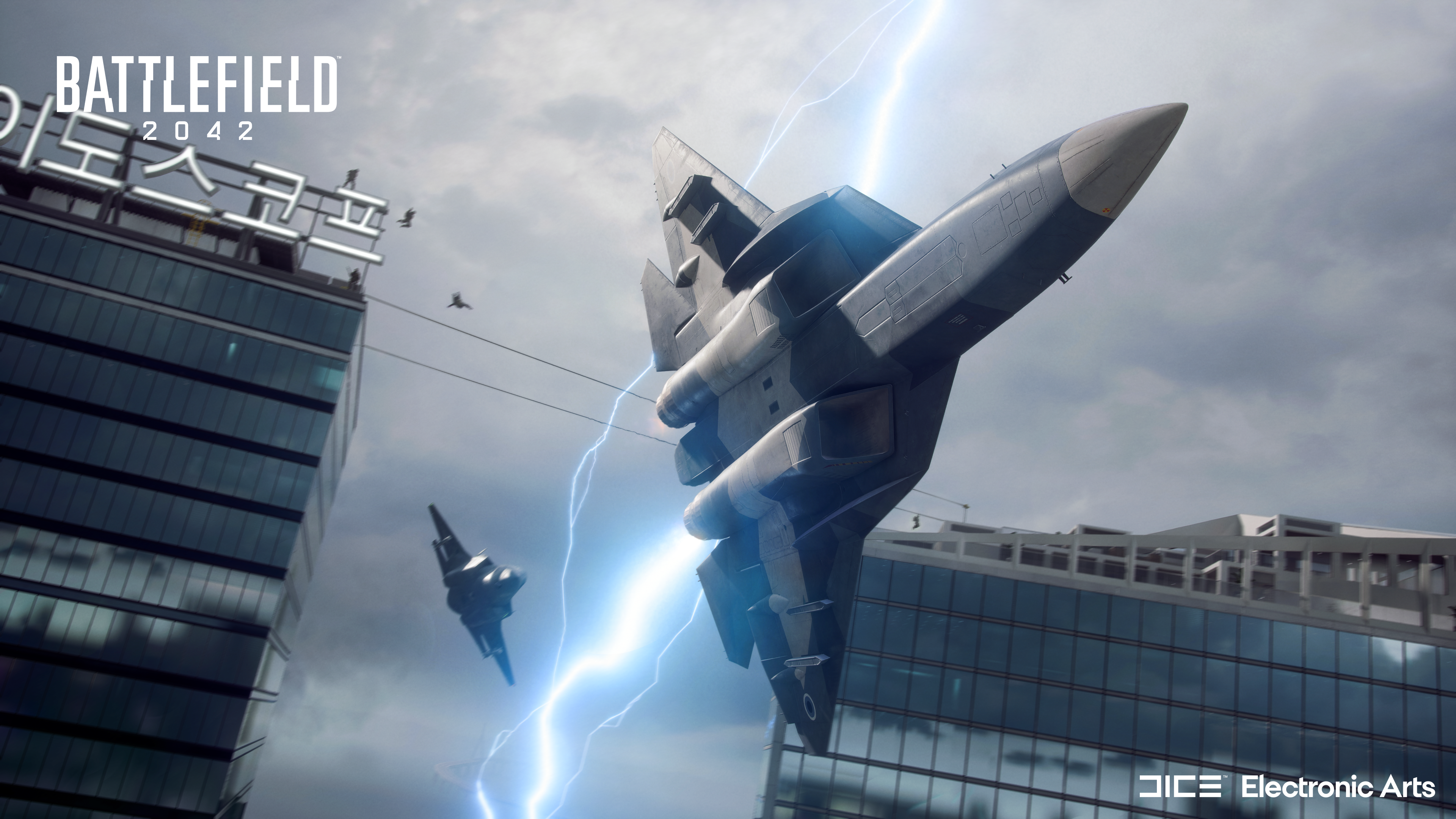 It also marks the franchise’s return to (near) modern day. The real-world yet fictitious setting pitches a “what if” scenario of societies crumbling in the face of violent climate changes and diminishing resources. Stateless soldiers (“No-Pat Specialists”) now fight on behalf of the remaining superpowers. The setup is close enough to today to be recognisable, but far enough in the future to include advanced arsenals and destructive weather patterns. Fitting though with the series’ 20th anniversary coming up, that EA offers a nod – unintentional or otherwise – to franchise starter Battlefield 1942 in its selection of year. 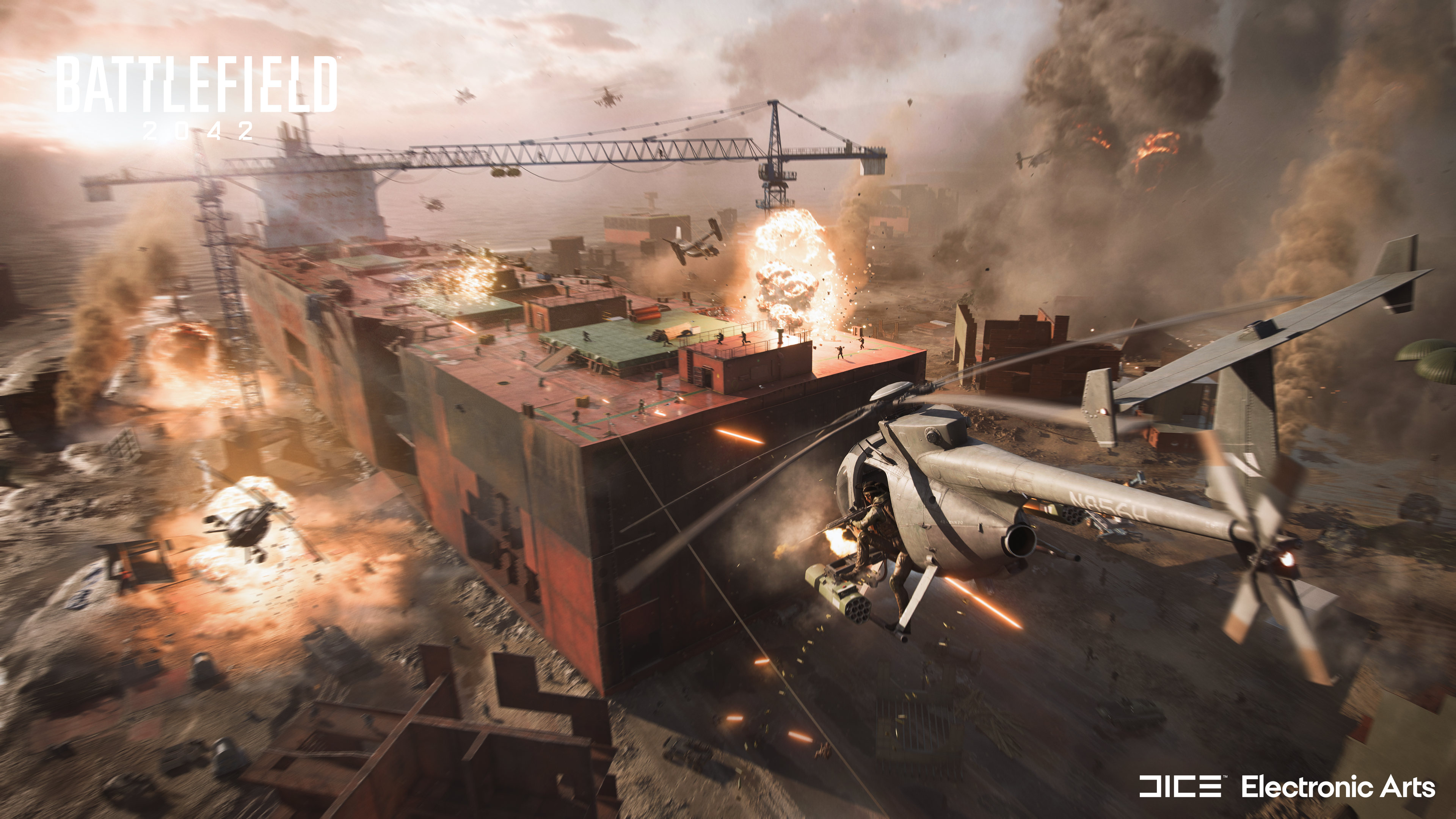 All Out Warfare’s Conquest and Breakthrough

There are three gameplay pillars – “experiences”- to 2042. Only two have been named. Of that pair only All Out Warfare is the focus of this first look, debuting with a duo of familiar modes. Hazard Zone, as well as the mystery third pillar – in development at Dice LA – will get their full reveal at a later date.  Dice reinforce Hazard Zone is something all-new for the franchise: a modern take on multiplayer that’s a “high-stakes, squad-based game type”. The studio is emphatic in stressing it isn’t a battle royale mode. 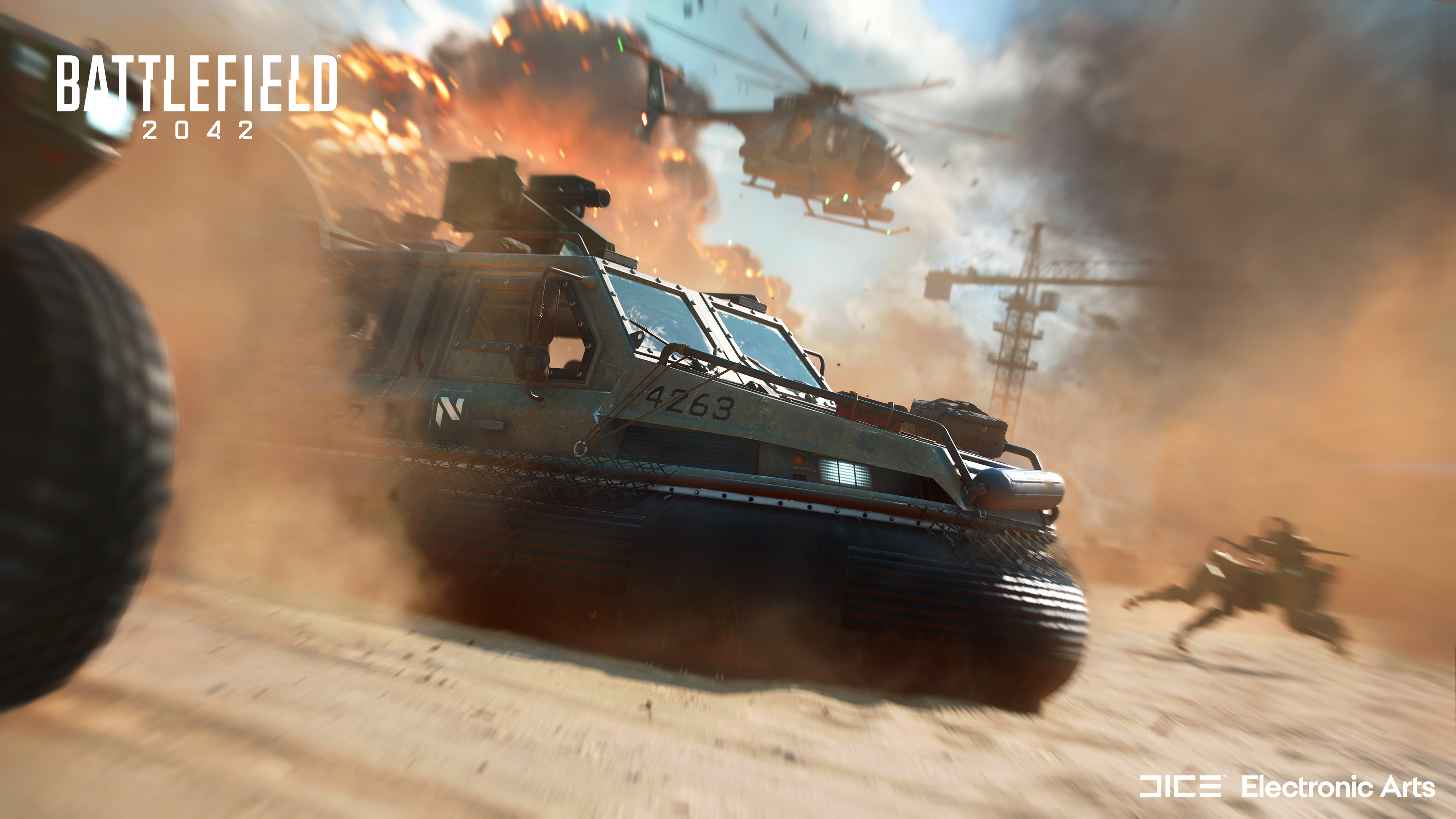 As ever, there’ll be a fleet of vehicles to jump into during matches. Players will have access to a call-in tablet, letting them request a land-based vehicle to anywhere on the map. They can be deadly even before you hop in: Dice example pinpointing a tank to land onto an enemy sniper position.

So, those two All Out Warfare modes. Conquest has two teams duking it out on a huge space, with epic clashes and more personal frays playing out in pockets across a map. Breakthrough also drops two opposing sides into a single location, but is more guided: maps are divided up into sectors, in which there are multiple capture points. Attacking or defending sides need to hold points to flip sectors and shift an ever-moving frontline in their favour. Want time to get adjusted to what’s new and test things out? You can launch both modes with AI squadmates (and Dice confirms doing so still contributes to your overall progress). 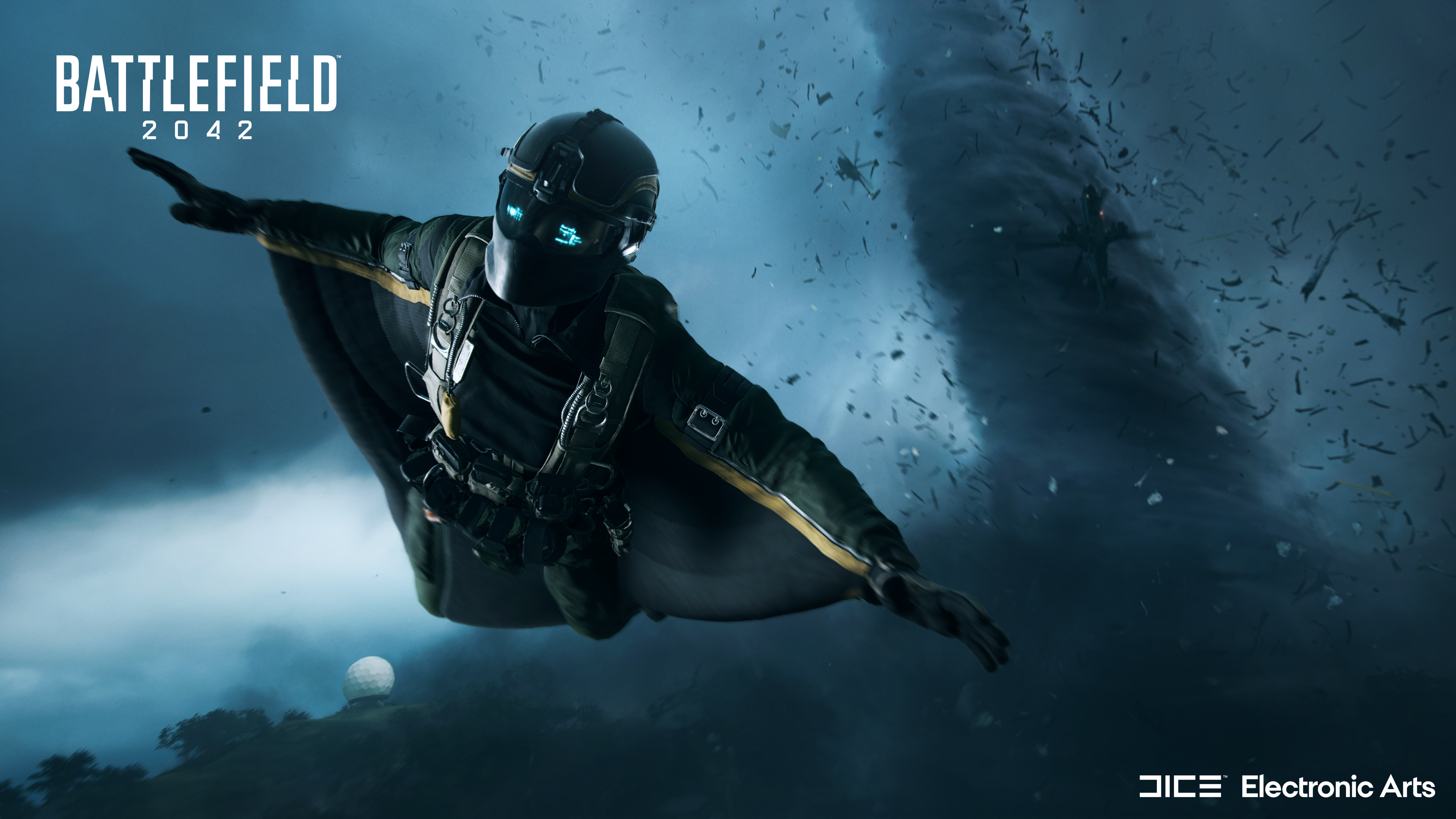 Maps and their dynamic events

A quick tour of both modes and some of the maps demonstrate Dice’s approach to shaping a satisfying ebb and flow to battles. There’s a look at locales based on real-world settings – desert cities, tanker rigs, cragged mountaintops – their geography catering to different insertion methods and combat approaches. Go big with multi-vehicle combat spectaculars, keep it tense with close-quarter combat and everything in-between.

Map-specific dynamic events are teased – visibility-altering sandstorms, a space rocket launch, destructive tornadoes. That last can be turned to your advantage with, as one example, the new wingsuits. If your Specialist comes equipped with one, you can ride the wind – just beware of debris and vehicles snatched into the storm. A potent mix of on-the-fly tactics and strategies carefully considered – lowering or raising bridges, locking down cranes, managing doorways – are designed to keep you thinking and be hyper-aware of your surroundings.

Those dynamic world events will feature whichever console you play on. PS4 player count per All Out Warfare match is 64, and subsequently PlayStation 4’s maps have been built with a smaller, more focused layout in mind.

All Out Warfare launches with seven maps total. Let’s take a quick tour of those: 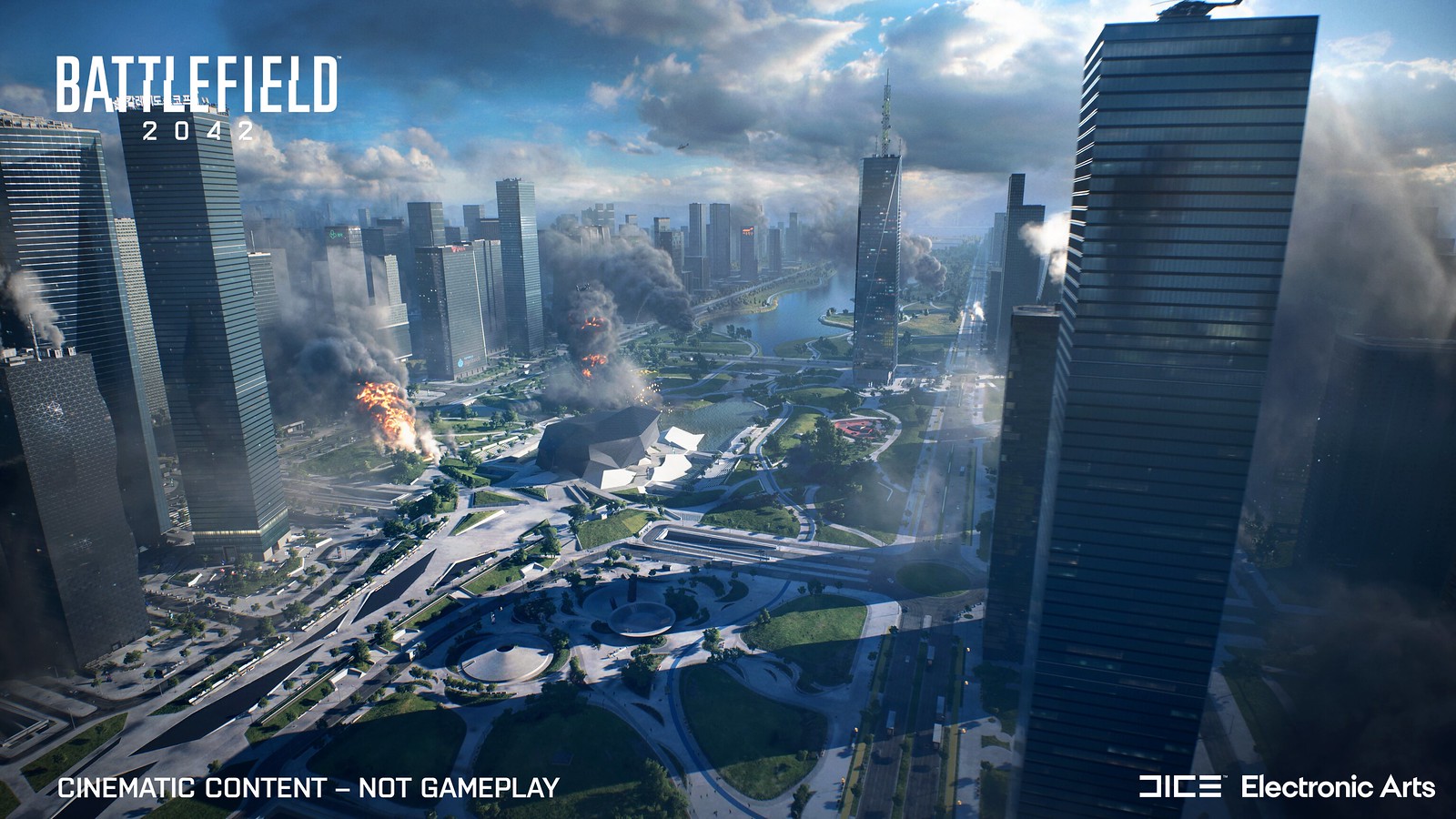 Kaleidoscope [Sogdo, South Korea] This cityscape features dense roadways and skyscrapers that can be explored, or if you’ve a wingsuit, leapt off. It’s here that a tornado that dwarves the glittering buildings will make its presence known. 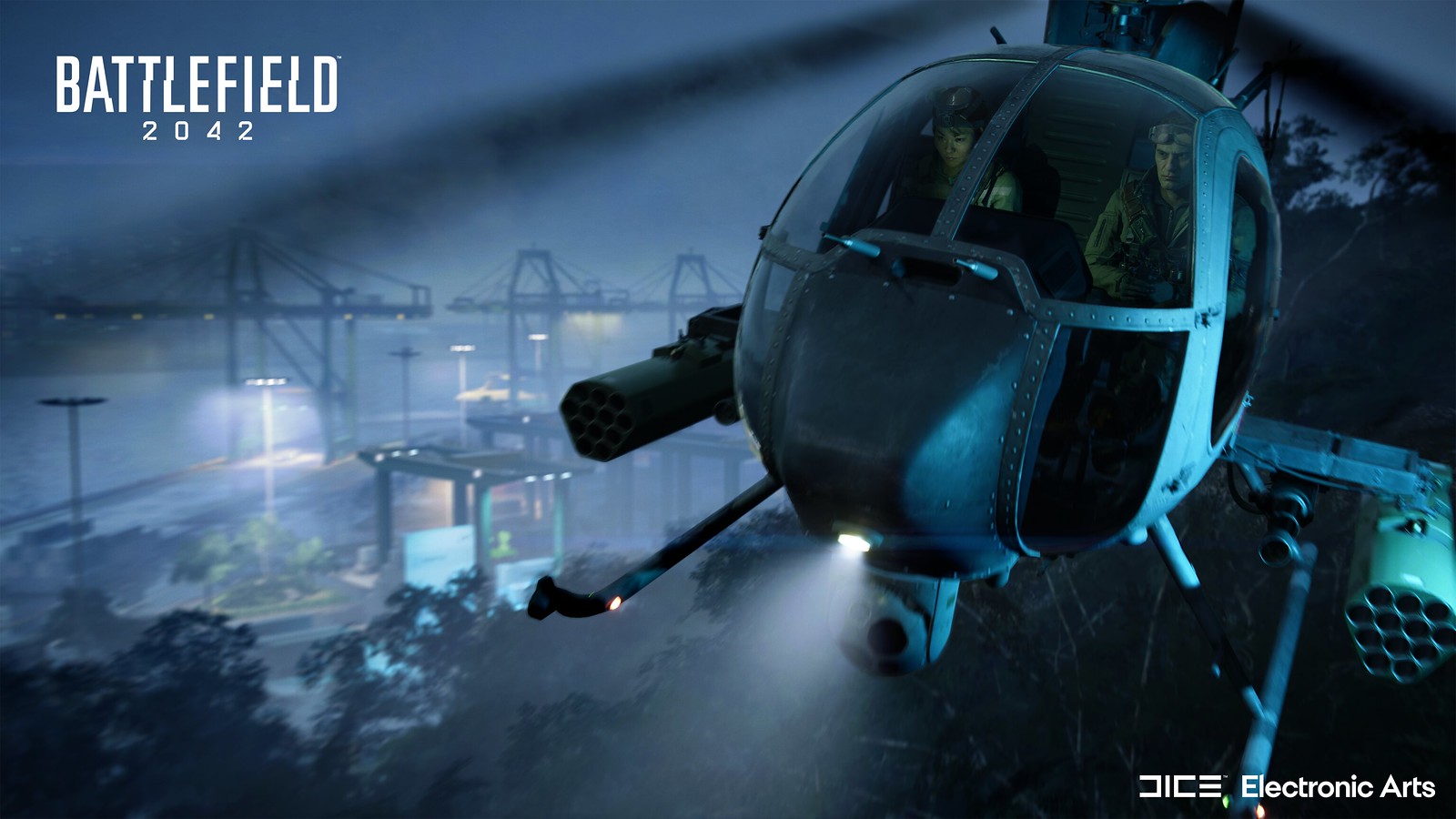 Manifest [Brani Island, Singapore] Supply lines are under threat in this key location for global trade. 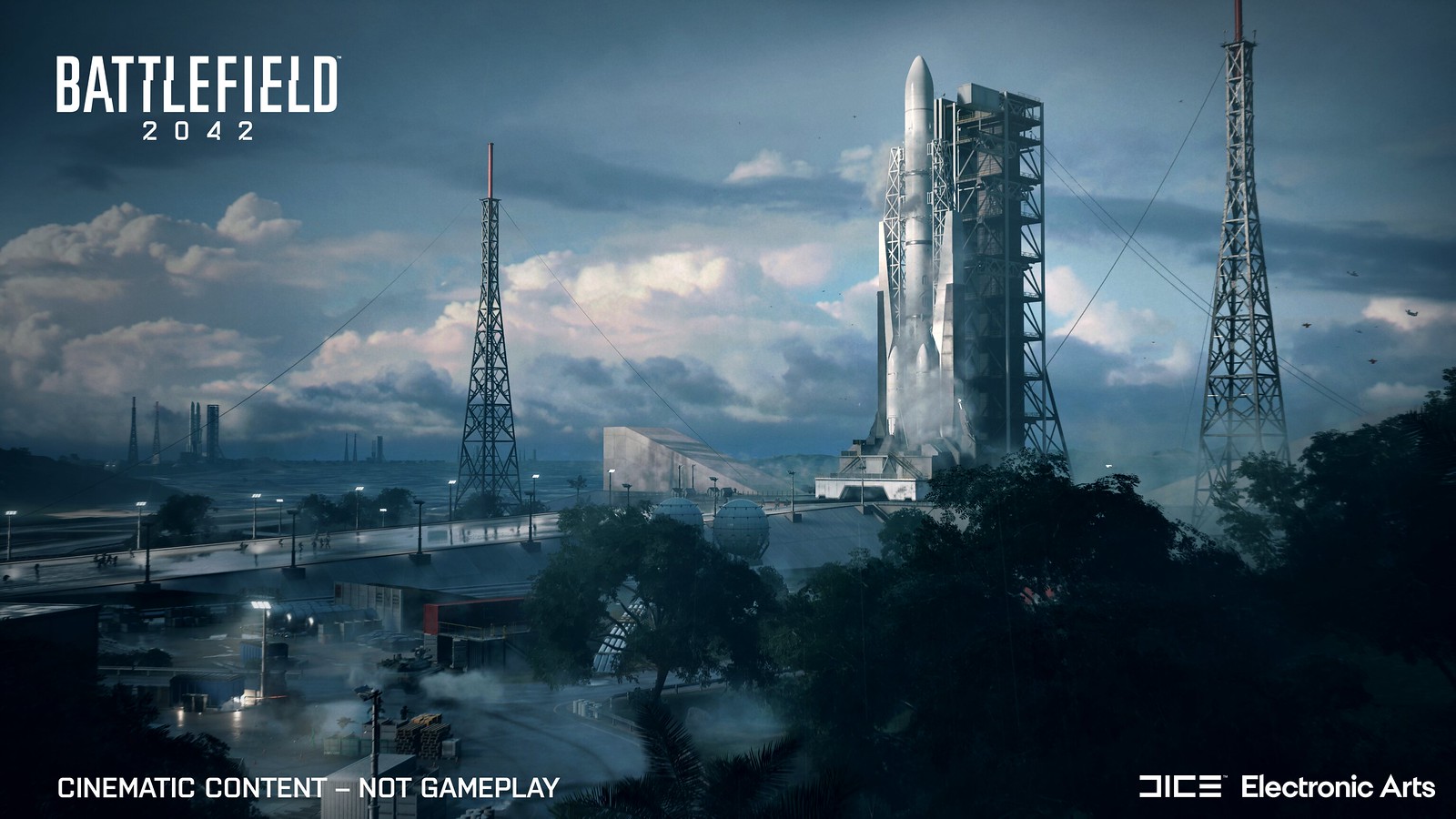 Orbital [Kourou, French Guiana] Players will battle in the shadow of a towering space rocket pad that’s counting down to an imminent launch. 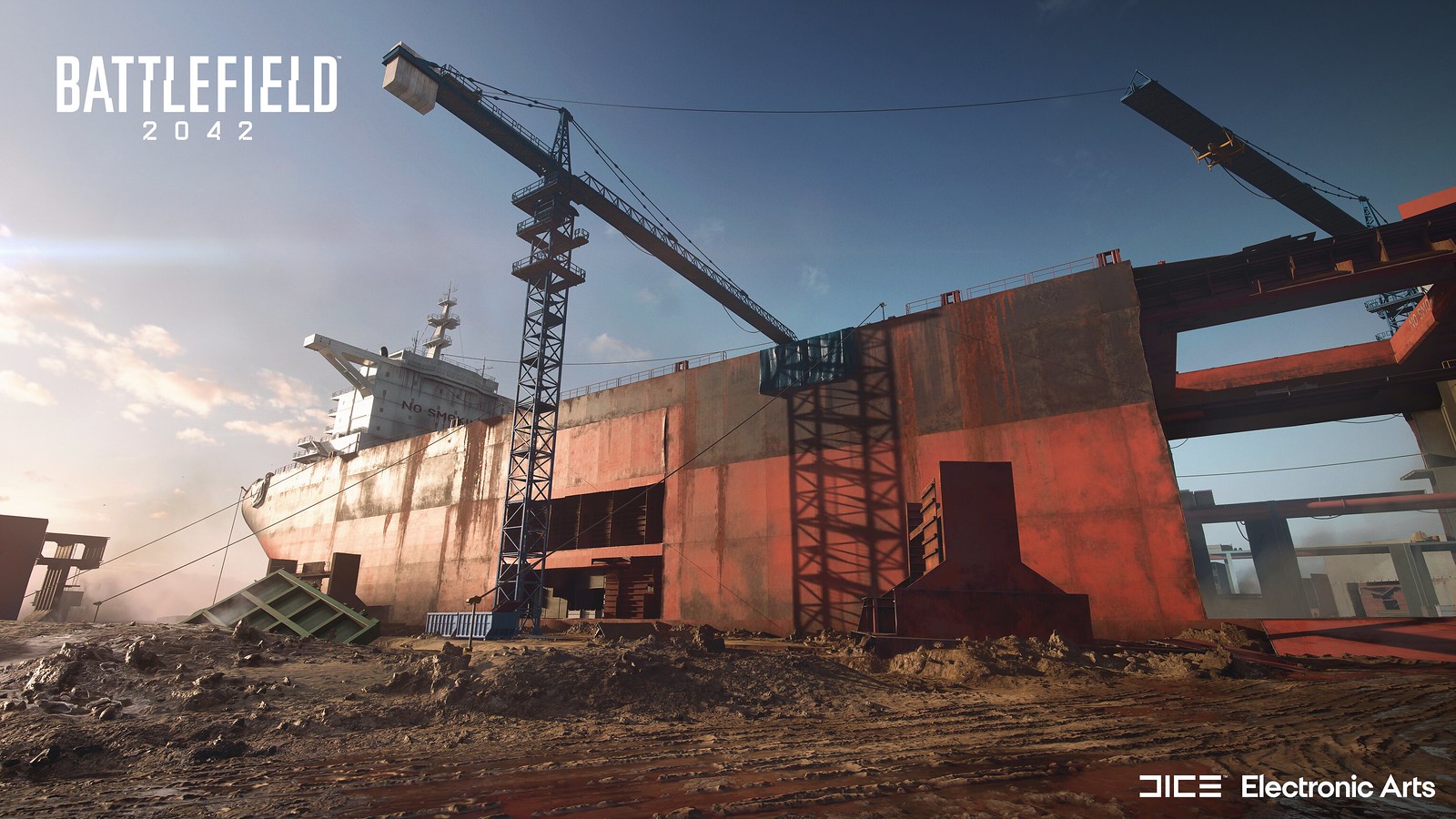 Discarded [Alang, India] Clash around, through and on top of massive ship hulks and the surrounding cranes. 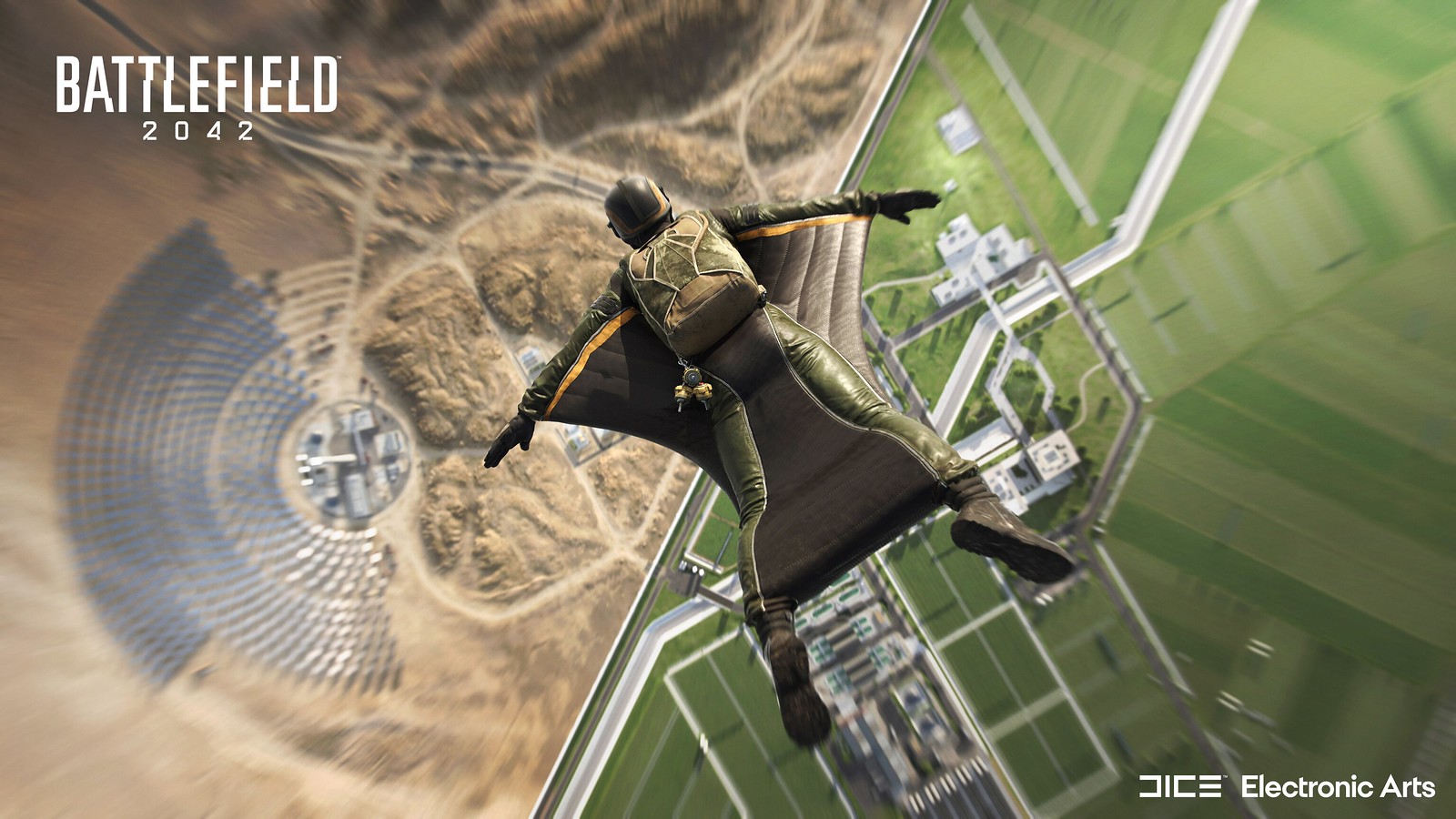 Renewal [Eastern Desert, Egypt] Wrestle for control of an agriculture technology centre in the Egyptian Desert. 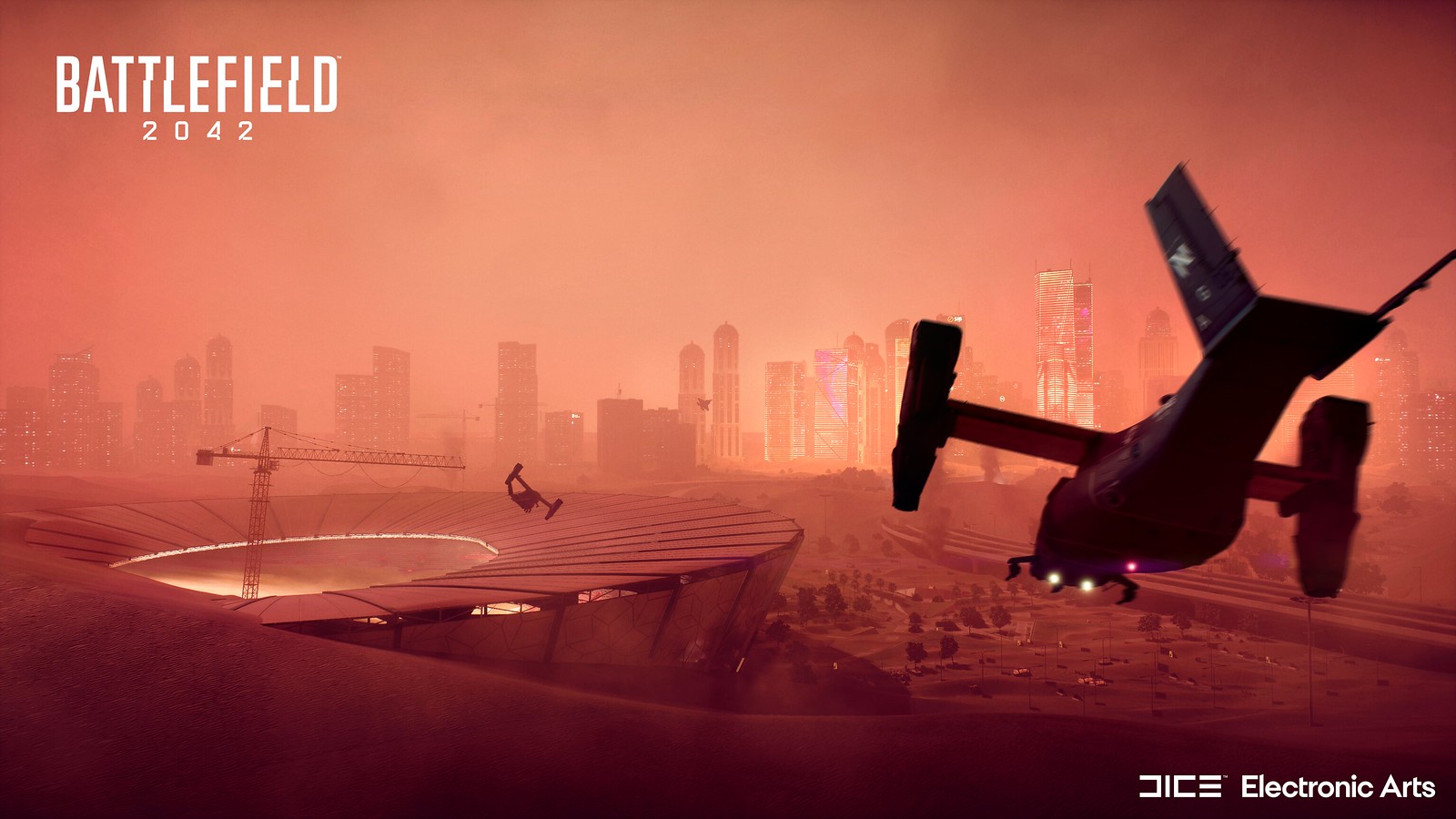 Hourglass [Doha, Qatar] An approaching sandstorm will shift the tide of war taking place at the heart of a city. 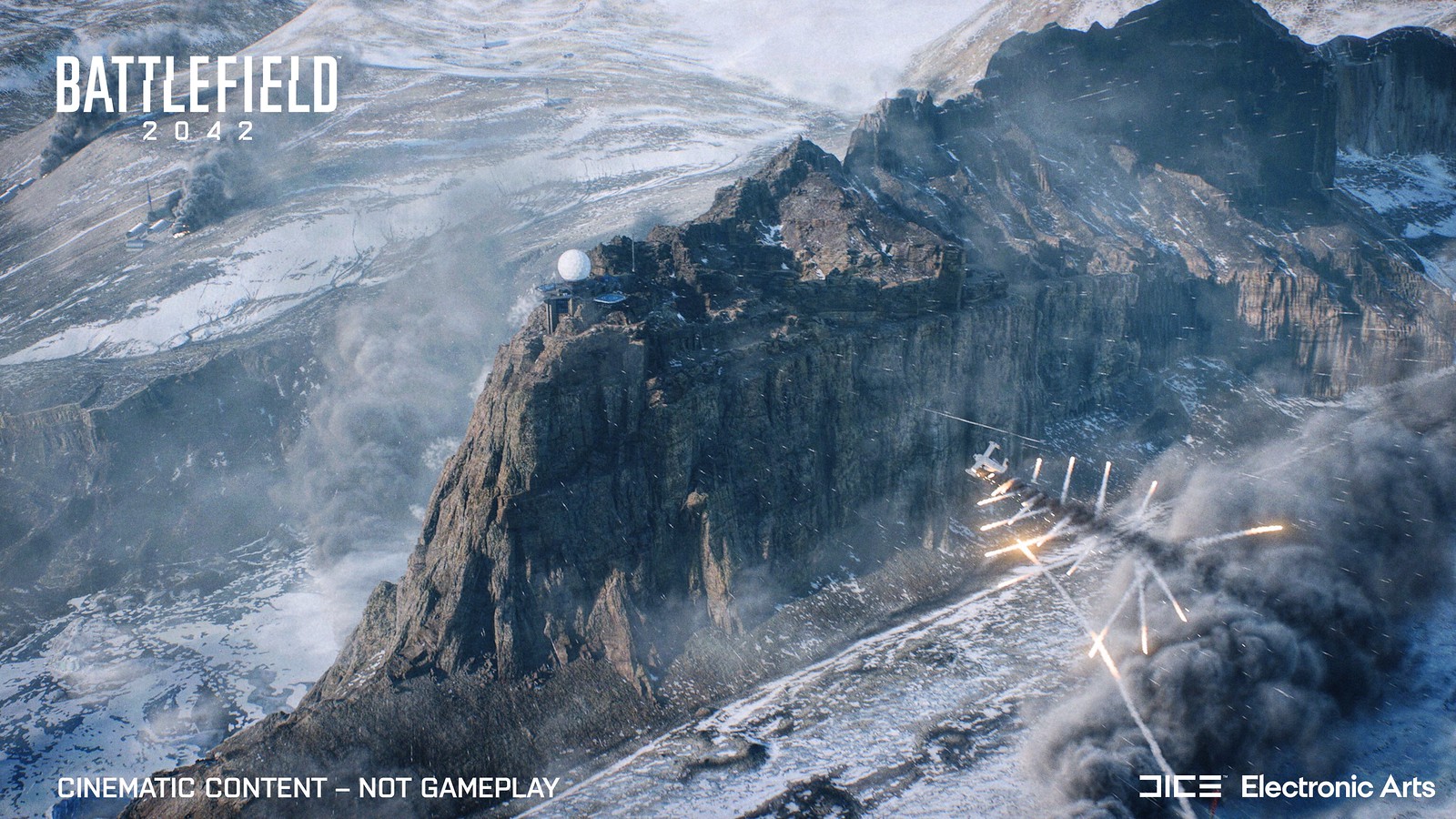 Breakaway [Queen Maud Land, Antarctica] From hot deserts to icy landscapes: oil and gas are the key resources being fought over here. Insert on the mountaintops with a wingsuit and you can dive into industrial buildings below.

Specialists are Battlefield 2042’s different character types. Each comes with a unique Speciality and Trait. The former may take the shape of a grappling hook (for Assault types only – a quick zip to higher spots) OV-P Recon Drone (the mark of the Recon – which can be piloted or parked to pinpoint targets) or S21 Syrette Pistol (handled by Support – firing health vials at those who need them). Those nicely pair with Traits. Assault types are known for their nimbleness, whereas a Support Specialist doubles as a Combat Surgeon, capable of fully restoring a comrade’s health.

Beyond those two unique abilities, Specialists can be customised with whatever loadout you wish, giving you more freedom to create a playstyle that fits you. Battlefield 2042 will offer 10 Specialists on launch. 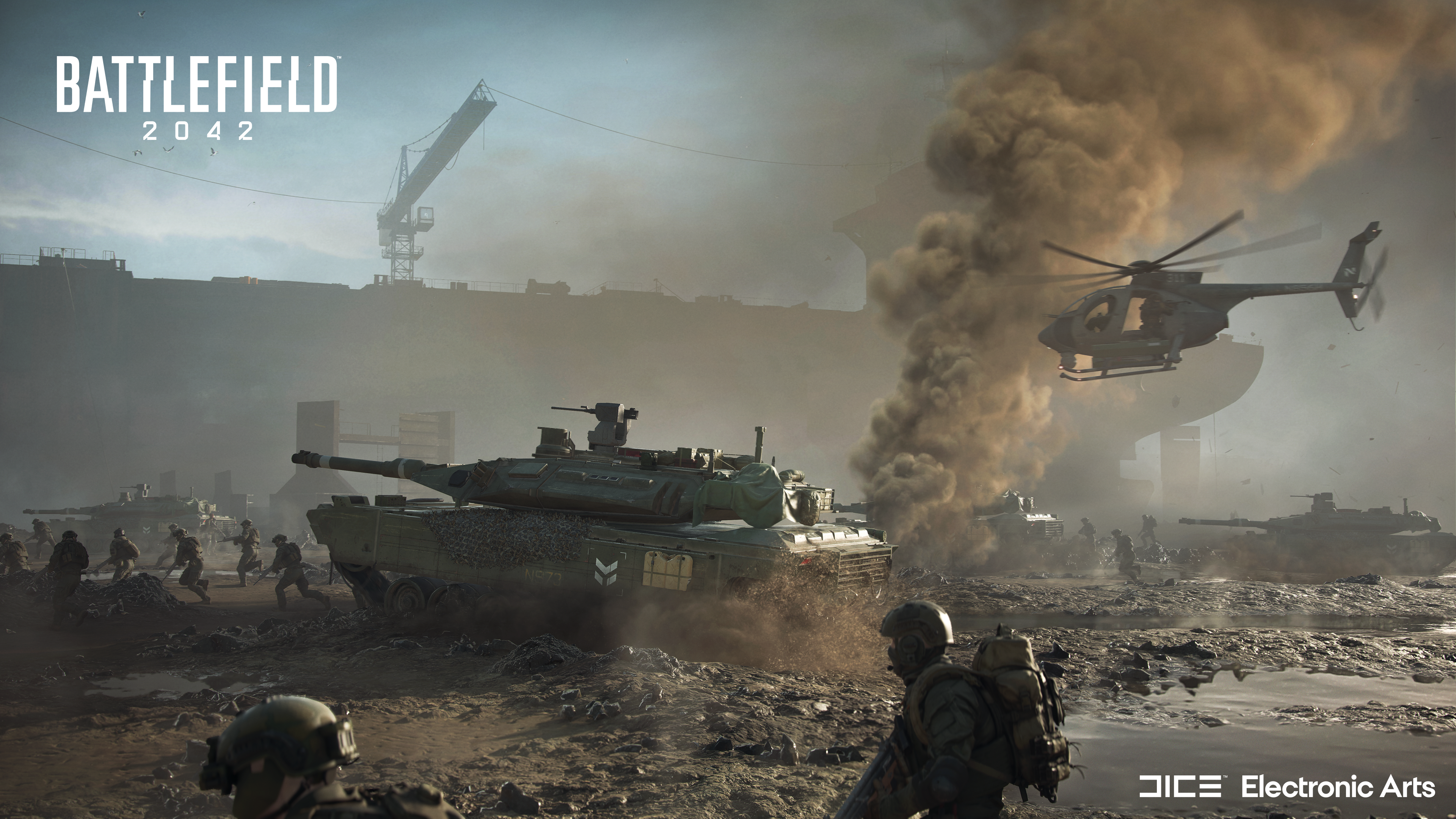 The Plus system (not shown) lets you customise your selected weapon without taking your eyes off the battlefield. A button tap will bring up a plus-shaped UI menu over your weapon, showing what you currently own. Each segment is tied to a specific item type – scopes, barrel, ammo type etc. Pick to equip.

The road to launch and Battle Pass

We’re marching towards the four month mark before launch and most of what those weeks ahead hold we can only speculate on. Two things are confirmed though. Pre-launch, players who pre-order can get an early taste of the game with an open beta (details are yet to be revealed). Post launch, Battlefield 2042’s first year promises four seasons of content, bringing with them four new Specialists plus new locations. Each season is marked by a new Battle Pass. EA confirms that new locations will be accessible to all players.

For a first reveal, there’s a lot to take in, yet plenty more to talk about. Look forward to more on Battlefield 2042 in the (near) future.