The Queen of the Banshees update marks the coming of Cliodhna, the newest Celtic goddess, available now in Smite on Xbox One and Xbox Series X|S.

The banshees’ wails sound across the emerald isle, their mournful keening the herald of doom upon a household, for death now waits beyond the door. Few symbols of the Celtic age have endured longer than the Banshee, and none of that dreaded pedigree commands more fame than their matriarch Cliodhna. The cry of the banshee survives even in the modern world as a parallel to a sound of intolerable hideousness where one’s first instinct is to cover their ears to block out a noise of such horrific potency. Yet while you should heed the peril of Cliodhna’s dreadful dirge, it is her silence that is far more terrifying.

We crafted Cliodhna to be an assassin with a kit that goes beyond merely waiting behind a wall; she’s inside the walls, lurking unseen until her prey is most vulnerable then striking with the fury of a graveyard screech. Cliodhna embodies the frightful aspect of the October months, allowing players to take on the role of the midnight terror, stalking their enemies and striking without warning. Other games hit you with jumpscares, but as Cliodhna, you are the jumpscare.

As potent as her passive ability to wait within the walls can be, lingering too long will sap her health and leave her vulnerable. Yet thanks to her second active ability, Flickering Visions, the banshee queen can remain unseen even in broad daylight, cursing her target with an inability to detect Cliodhna and granting her a speed boost for a swift escape. The ability showcases the unique playstyle the goddess offers: embrace the role of the haunting spirit and your enemies will fall straight into the grave. If you still haven’t picked up the 2021 Smite Season Pass, snag it now to get the Limited Ascended Cliodhna skin along with other content for every Season 8 God.

The Queen is bringing along treats as well as tricks with The Reaping: VIII. Fellow Celtic goddess Artio has taken up the mantle of Beast Seer to destroy the witchcraft plaguing the lands, but has been captured and sealed within a coffin. Break all the locks by completing eight event quests to receive the Beast Seer Artio Skin for free!

A chill creeps into the battleground with the Winter Deadwoods, a massive visual overhaul covering the conquest map in snow and ice. Plus: we’re introducing an all-new gameplay mechanic: lanterns. Breakable lanterns will be placed in key locations around the map. Attacking a lantern releases a cloud of obscuring mist for one minute, concealing players within from enemy minions and gods. Keep an eye out for broken lanterns: you never know what’s lurking inside the fog…

This update has something for everyone! There’s a new goddess, new map update, a new event, and for everyone following the Odyssey, the C.A.T. Force Hercules skin is rising out of the Perilous Seas, and now is the perfect time to dive into the event!

Have a happy Fall season, and remember…

She’s in the walls. 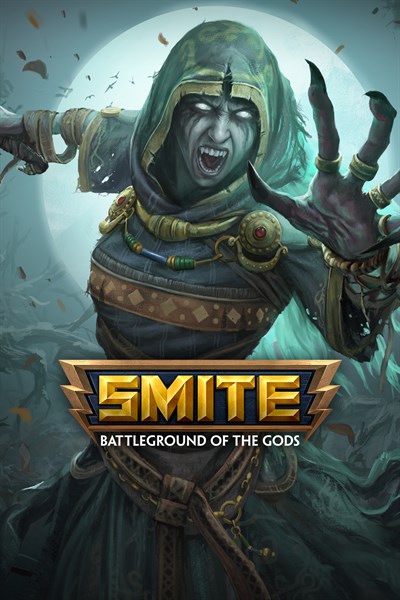 ☆☆☆☆☆ 1184
★★★★★
Get it now
Xbox One X Enhanced
Enter the Battleground of the Gods Join 35+ million players in SMITE, the world’s most popular action multiplayer online battle arena. Become a legend of myth, enter the Battleground of the Gods, and play FREE now! 100+ Gods
Unleash each deity’s unique strategies, legendary weapons, and earth-shattering powers. Rain lightning down upon your foes as Zeus, assassinate from the shadows as Loki, or transform and trick your foes as the Monkey King, Sun Wukong. Which God will you choose? Unique Perspective
Unlike other MOBAs, SMITE puts you directly onto the battlefield with a third-person action viewpoint. From blind-side ambushes to aimed shots, a new pantheon of strategic possibilities awaits. Become Godlike
Never played a battle arena before? Don’t worry. Auto-buy, auto-level, and the deathmatch-like Arena mode let you jump right into divine MOBA action. Aspiring pro? Top the ladders, join a competitive team, and you too could be playing at the SMITE World Championship. © 2012 – 2021 Hi-Rez Studios, Inc. "SMITE", "Battleground of the Gods", "Titan Forge Games", and "Hi-Rez Studios" are trademarks or registered trademarks of Hi-Rez Studios, Inc. in the U.S. and/or other countries. All trademarks and copyright material are property of their respective owners. All rights reserved. STRANGER THINGS ™/© Netflix. Used with permission.