Marvel’s Guardians of the Galaxy is out now on Xbox One and Xbox Series X|S! Damn that feels good to write. In close collaboration with Marvel, our team at Eidos-Montréal has been cooking up a fresh take on the Guardians in an all-new universe. This a story-driven, single-player, third-person action-adventure game that’ll take you on a wild ride.

Need a quick primer on what our game has to offer? Check out the video below – that’s everything you need to know in less than 60 seconds!

In our game, you’ll be playing as Star-Lord, the (so-called) leader of the Guardians. Somehow, he managed to convince four legendary outlaws to join his crew. They haven’t been hanging together for that long, and they’re still figuring out the group’s dynamics as they travel across the galaxy, looking for adventure and profit. But soon enough, they’ll trigger a chain reaction of events that will allow the Universal Church of Truth to rise to prominence. Their aim? Nothing less than to submit the galaxy to their beliefs.

You’re pretty much the glue that holds the group together, and you’ll interact with the Guardians all through the adventure. In combat, it’s not only about Star-Lord: you’ll have to use the unique strengths and abilities of your crew to defeat a wide variety of cosmic enemies (including bosses!). For example, Drax is the best at inflicting stagger damage and stunning enemies, whereas Gamora dishes out the most health damage. Groot is great at crowd control by immobilizing enemies, while you can use Rocket’s explosive do finish off multiple enemies at once.

In exploration, you’ll come across environmental puzzles that you can overcome by using each of the Guardians’ talents. For example, Rocket is your go-to for any hacking job. Gamora can help you reach elevated areas, and Drax has the strength to move or topple massive structures. As for Groot, he can use his vines to create temporary bridges. It’s all about teamwork.

Throughout the story, you’ll get to make choices that will impact your relationships with the Guardians, but also have consequences on how some sections of the game will play out. Early on in the game, you’ll try to con Lady Hellbender a fake-sell her a “rare monster”. Will it be Rocket or Groot? How will you handle the negotiation with her? It can really go either way depending on your choices…

It doesn’t stop there as you’ll also be able to customize your crew with 40+ outfits that you can unlock in-game. And on top of that, we curated a killer soundtrack for you to jam to on this cosmic road trip – get ready to go down memory lane with 30+ classic ‘80s tracks. We got some Rick Astley, Iron Maiden, New Kids on the Block and much more!

You can purchase and play Marvel’s Guardians of the Galaxy today on the Xbox Store! Also, thanks to Smart Delivery support, the best version of the game will automatically be delivered to your Xbox console — regardless of generation — with no extra steps required from you at no additional cost!

So, join us on an unforgettable journey across the galaxy where the only thing you can expect is… the unexpected. You got this. Probably. 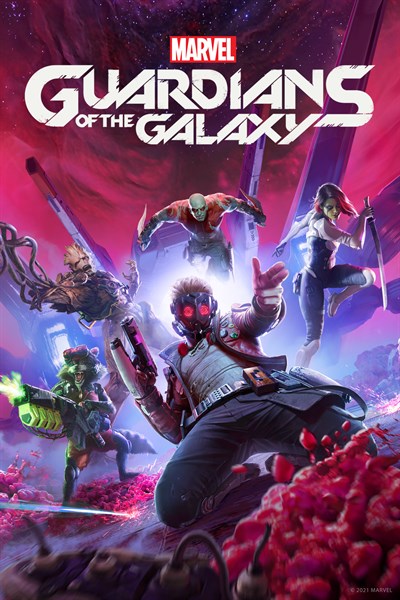 Marvel's Guardians of the Galaxy

☆☆☆☆☆ 191
★★★★★
Get it now
Pre-order Marvel’s Guardians of the Galaxy to obtain an early unlock of the Throwback Guardians Outfit Pack. It allows you to instantly receive one outfit for each of the Guardians, which are faithful interpretations of some of their most iconic looks from the Marvel comics. The outfits included in this pack are:
– Team-Lord (Star-Lord)
– Black Vortex (Gamora)
– Thanos Imperative (Drax)
– The Stinger (Rocket) – Impaler (Groot) Fire up a wild ride across the cosmos with a fresh take on Marvel’s Guardians of the Galaxy. In this third-person action-adventure game, you are Star-Lord, and thanks to your bold yet questionable leadership, you have persuaded an oddball crew of unlikely heroes to join you. Some jerk (surely not you) has set off a chain of catastrophic events, and only you can hold the unpredictable Guardians together long enough to fight off total interplanetary meltdown. Use Element Blasters, tag-team beat downs, jet boot-powered dropkicks, nothing’s off-limits. If you think it’s all going to plan, you’re in for a world of surprises, with the consequences of your actions guaranteed to keep the Guardians on their toes. In this original Marvel’s Guardians of the Galaxy story, you’ll cross paths with powerful new beings and unique takes on iconic characters, all caught in a struggle for the galaxy’s fate. It’s time to show the universe what you’re made of. You got this. Probably. Digital download bonus:
– Social-Lord Outfit for Star-Lord (Early Unlock)

Related:
Next Week on Xbox: October 25 to 29
Start Your Engines! Circuit Superstars is a Love Letter to Motorsport
Stranger of Paradise Final Fantasy Origin Trial Version and Release Date Revealed