Hi everybody, it’s a great pleasure to be back on the PS Blog for a new story on Astro Bot Rescue Mission. Today is a bit special because we’re going to be lifting the lid over mishaps and hiccups we encountered while creating the game and how we got around solving them. Or not. 🙂

The thing to be aware of when developing creative content such as video games is that it inevitably means that some of the work will go to waste. That’s especially true with innovative games where the search for new experiences implies numerous iterations until things feel right.

So grab your Astro broom and let’s head out to Space! Please don’t expect amazing graphics here, these ideas were all abandoned before they got to be embellished by our lovely artists.

Let’s start with the “Mecha Spider Enemy”: Imagined as a fire-spitting baddie, it required you to cut its legs using the shuriken gadget before Astro could give it the final punch. Getting this one to move well with four, three, two or even one remaining leg proved a real challenge. The distance was problematic too, as we needed space to get a good shuriken-flicking experience. In the end, we dropped the prototype and opted for the bamboo enemy — simpler, clearer, more versatile, and gratifying to shoot. 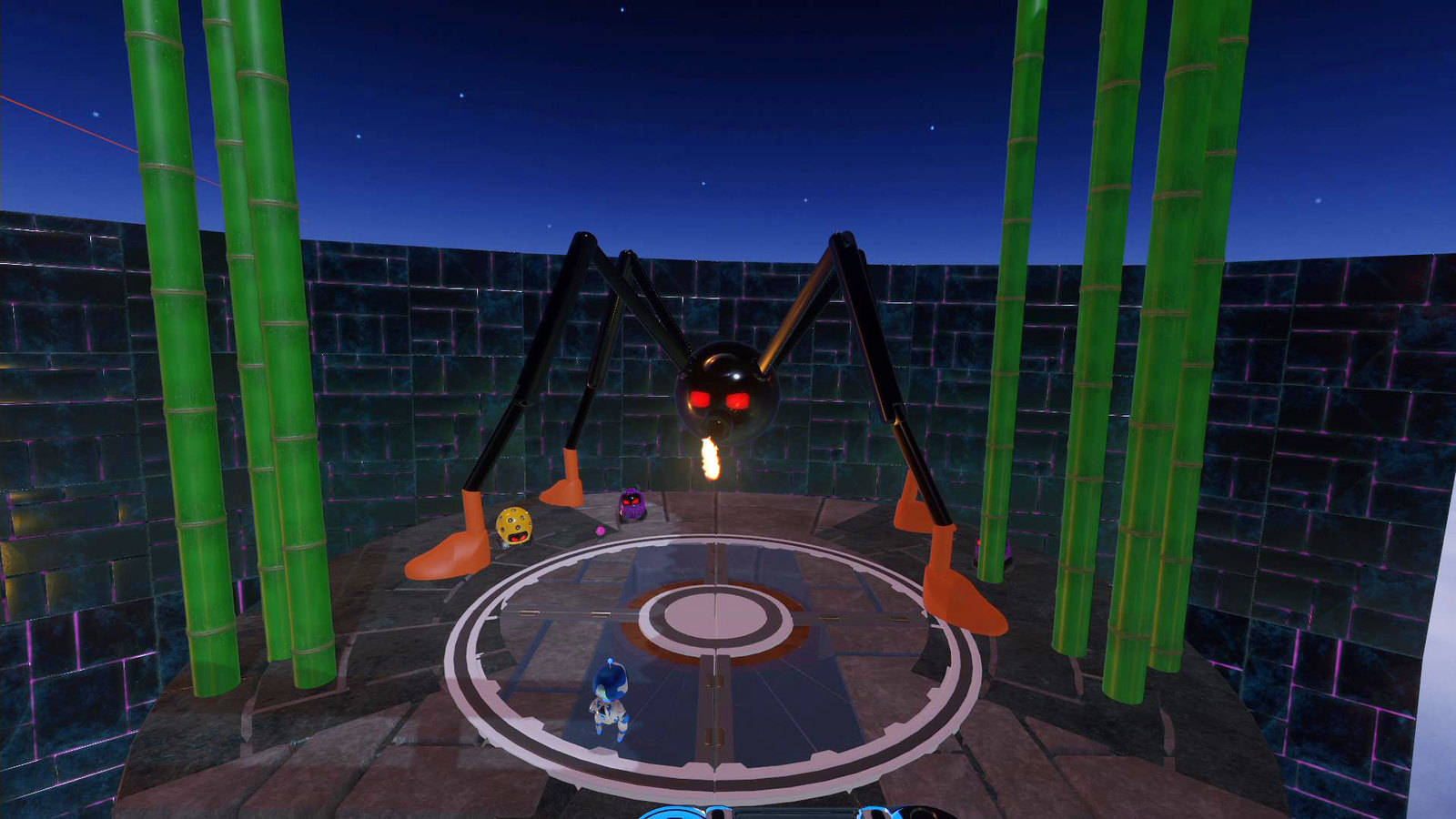 The “Mecha Spider” Enemy prototype about to fry Astro.

Levels of course also got their fair amount of chopping, if they weren’t dropped altogether. Luckily, the way we built them meant that a big piece could be cut off, readjusted, and applied to a different stage. This is how part of the loooooong Canyon Stage was removed and ended up being used in the Volcano Stage. We cut out the last chunk and did a bit of resizing: building blocks from the rocky theme were quickly swapped for molten rocks, the water down below made way for bubbling lava, the enemies were replaced with fire-themed foes and voila! Well, it sounds easier than it actually was, but it was definitely quicker than if we had created everything from scratch. 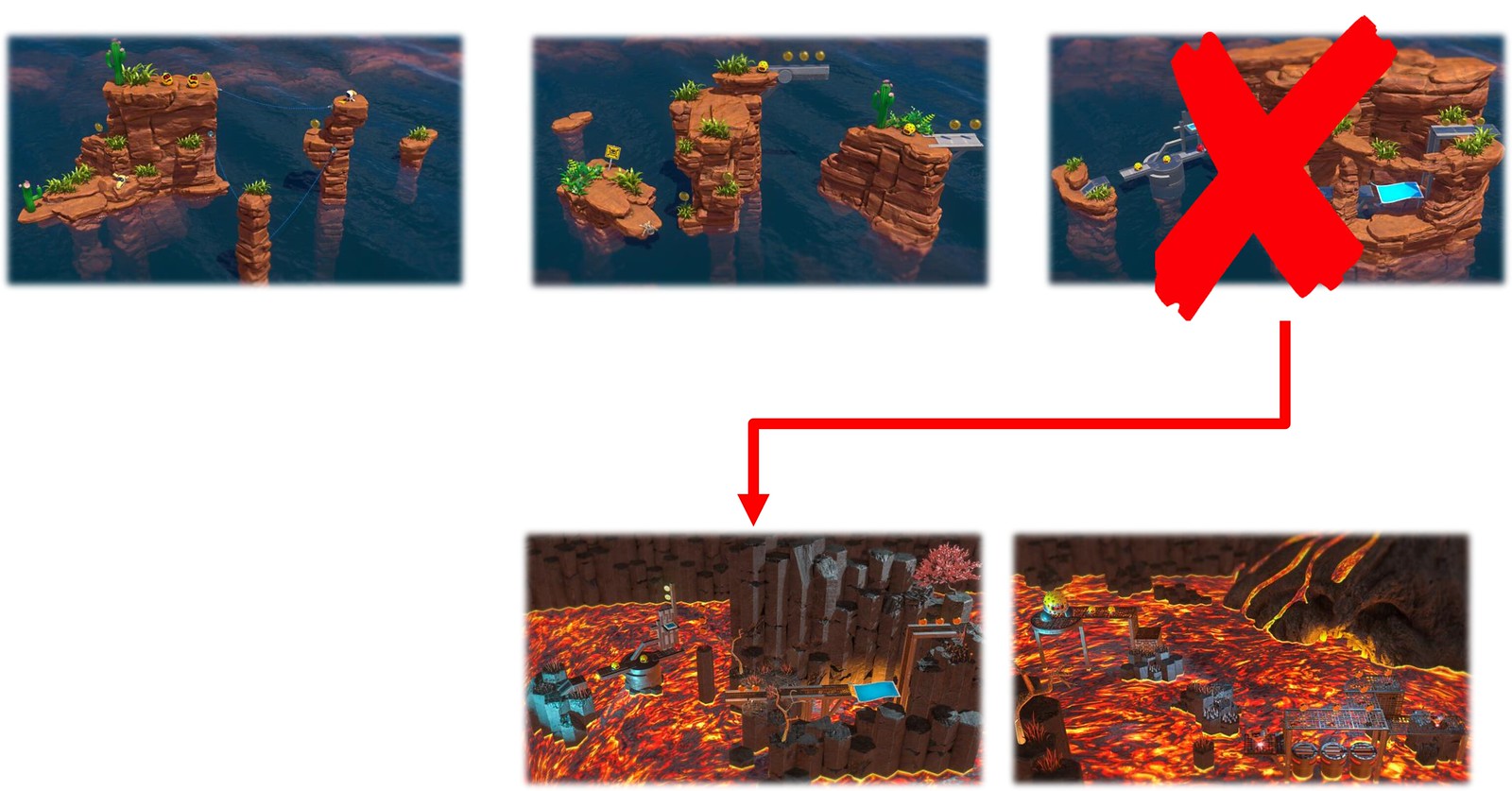 Some level sections were cut and used as part of other areas. Here the third section of the Canyon level was re-purposed for use in a lava stage.

Astro himself was not safe from the occasional axing: we tried making him dance and sing to the level’s music whenever he would be idling. We tried it and realized that besides the need for a voice that would not get annoying, the tempo of animations and music style were so varied for each level that we would have to create a large amount of bespoke animations. Considering that the player would only notice this feature when inactive, the cost did not feel right and we ended putting our efforts into better animations for the environment and the stranded bots. 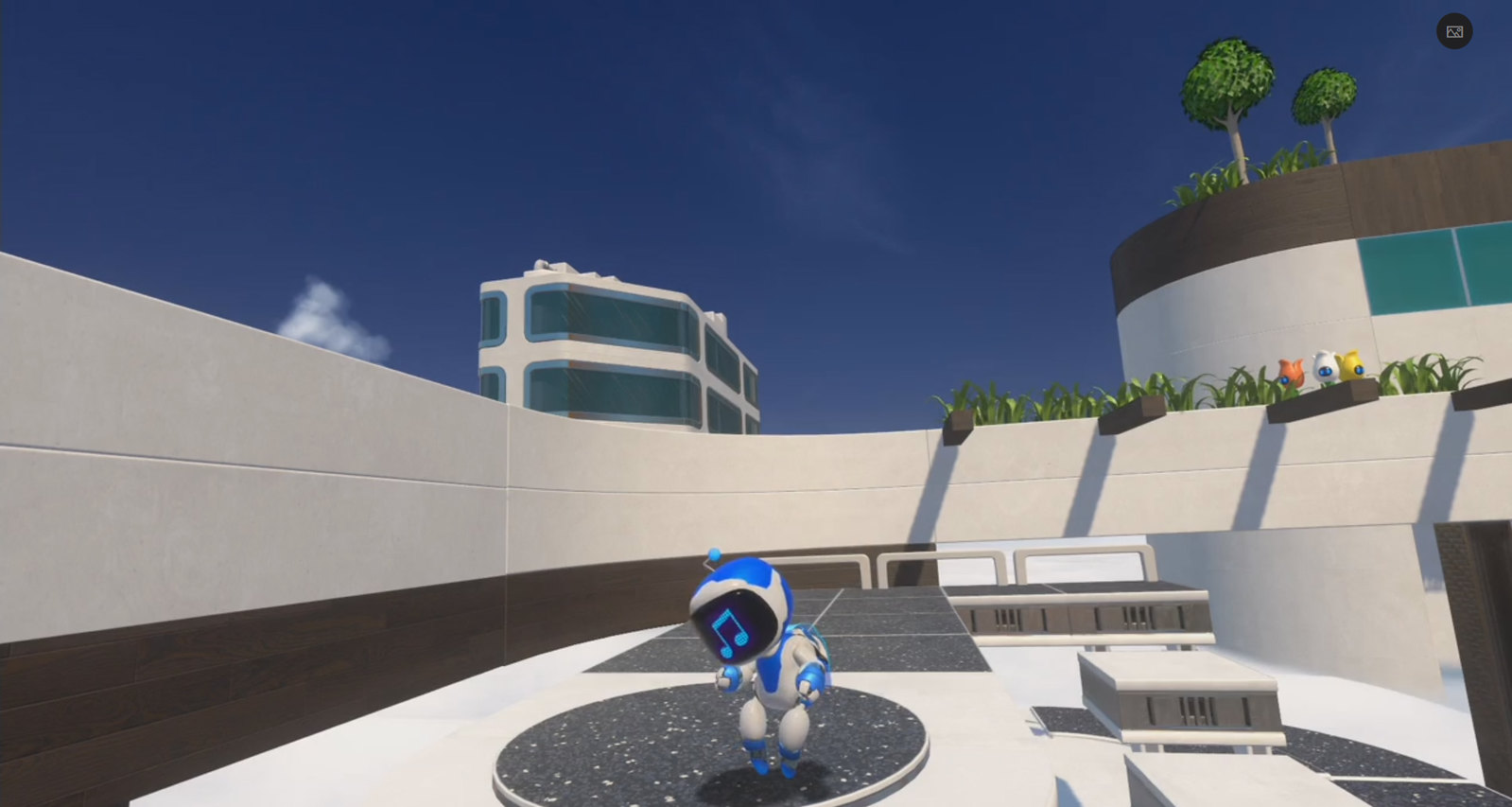 He’s smooth and he has groove, but that wasn’t quite enough to keep Astro’s singing feature.

And last but not least, our biggest cut of all: multiplayer mode!

Multiplayer was always at the heart of Team Asobi’s previous projects and it made sense for the team to continue that trend. So we developed a TV mode where three more players could join Astro and share the same play space, making their way to the goal together while climbing and punching each other and generally goofing around. It was a lot of fun and hearing the team’s laughter every morning was an indicator we were making a fun local multiplayer game… 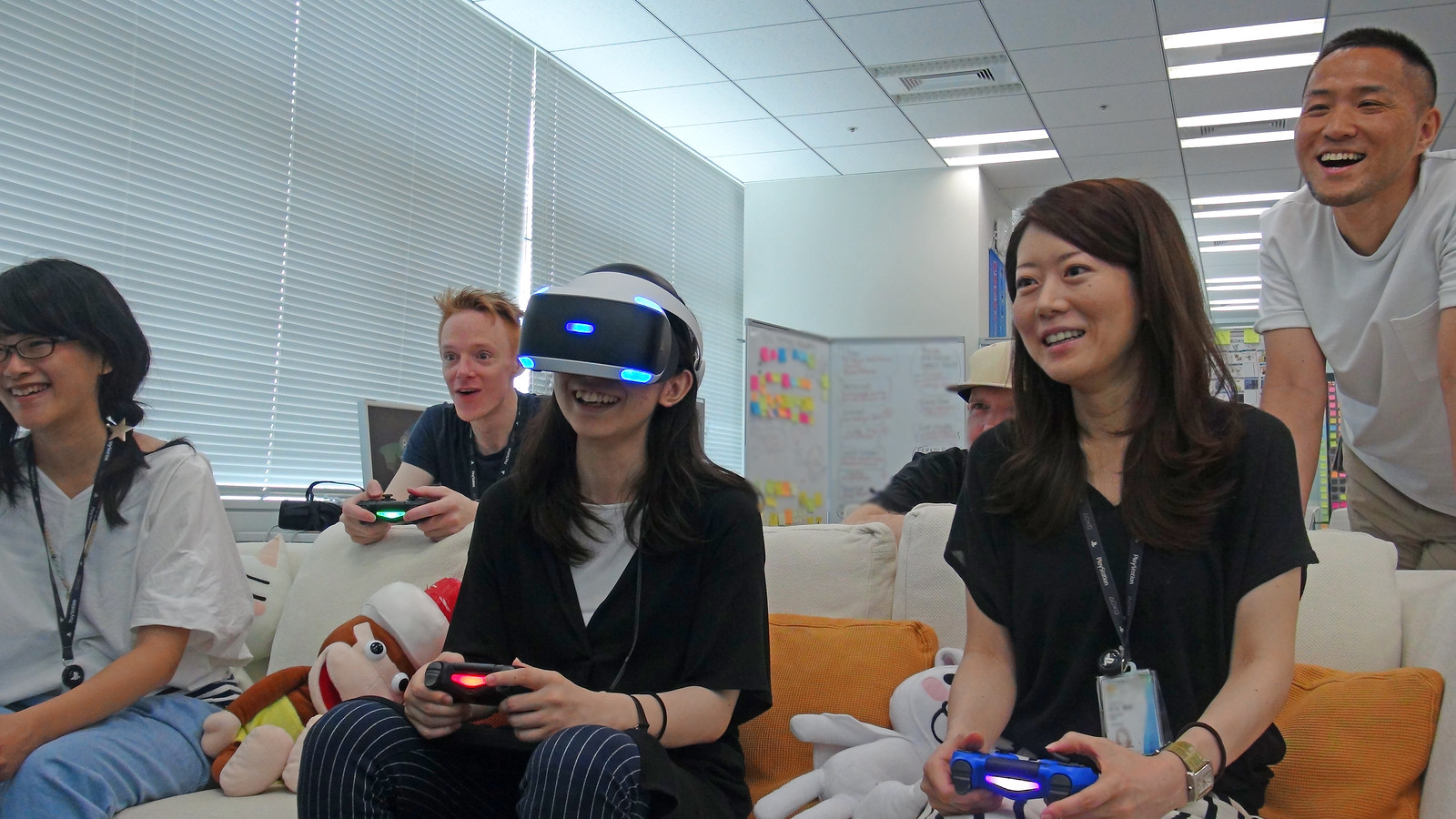 Team Asobi testing multiplayer in one of their regular morning plays.

… Except when playing the game in VR, especially solo, things weren’t so fun: the levels built for multiplayer were too large and felt empty. There wasn’t enough use of verticality or perspective, largely because the TV camera had to fit four players on screen at all times and therefore keep movement and amplitude at a minimum. Without noticing, we were slowly putting the priority on TV play at the expense of VR.

We were nine months into our 18 month development when a serious call had to be made: multiplayer was put on the back burner to unleash the creativity of the level designers and let the game’s “VR ness” bloom. Within days, the change paid off: Levels such as Vertigo-go appeared as the new benchmark, full of unique gameplay only possible in VR and the tempo we had been searching for all along. More levels soon followed. The rest, as they say, is history. 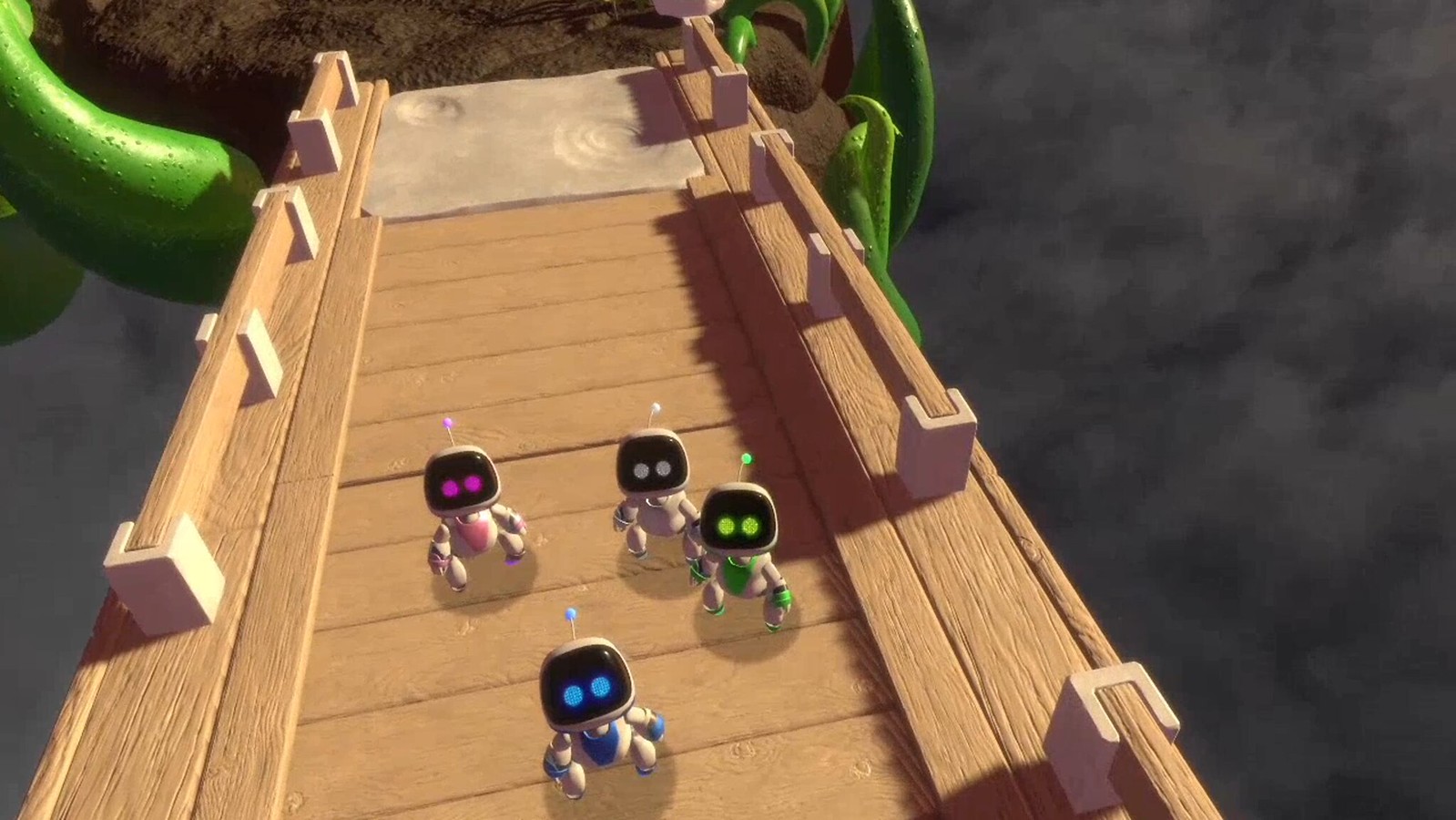 The ill-fated multiplayer mode, before it was axed to allow the team to maximize on the VR Medium.

The multiplayer episode was a difficult time on the project. It was probably the hardest cut we ever made, and it created some controversy within the team, especially because it felt like we were taking something of quality away. But at times, such decisions are necessary for the greater good and there is no more regret today as it allowed the game — and the team — to reach new heights.

I hope you enjoyed this insight on hiccups and mishaps from Astro Bot Rescue Mission. Thank you for your continued encouragement and please let us know your thoughts in the comments below.

Until next time, friends!