Some time ago, after years of searching for a job in games and never finding a real opportunity in the industry, I felt like I wasn’t good enough or there was something wrong with me, I wanted to give up. Before I did, I decided to give it one more shot, on my own and put everything I had into one last project. With the idea that if people liked it, I would keep going. If not, then I would move on.

I set some guidelines for myself like, making sure the game would be something “younger me” would love, making the game feel cool, no filler, keeping it the length of an action movie so people could complete it in an afternoon. Making it as fun to watch as it is to play. Lastly, I would only give myself 15 months. With the rules now set, I just had to figure out what I was actually going to make.

I wanted to pick a mechanic that would be familiar to people while also picking something that hasn’t been done in a while. Giving me room to experiment and tweak the gameplay to really make it my own. I landed on this “Narrative Runner” concept that I’d had always wanted to do that incorporated a full story, cutscenes, being more dynamic and welcoming to players that might not have been able to grow with the past games in the genre. After the first few months, I had a really rough working prototype. It wasn’t much but it gave me a good idea of what worked and what didn’t, from that first pass.

Over the next year, I had completed almost half of the game. About 6 levels while constantly having friends playtest the game giving me feedback and suggestions. This was very important as every level was handcrafted with every obstacle being hand placed rather than using procedurally generated content. At that point, I went to my friend Dan who had done all of the music for my projects to the score for the game. I knew I wanted to mix two different genres of music, but the first few attempts didn’t feel right. After a few months of back and forth, we came up with a chill but exciting mix of hip-hop and classic jazz. We came up with a really interesting workflow where I would do some art and give him plot details about the level and he would use that as a guild of how the songs should feel.

At this point, the title of the game went through a few iterations before I landed on “Never Yield” I felt it was the perfect description for both the characters’ trials as well as my own. I then added my Tag “Aerial_Knight” to the title. The name I’ve gone by online since I was a kid. I wanted to let people know that there wasn’t a large studio or big team that put this game together but just a guy who couldn’t find an opportunity in the games industry and tried to make his own.

Shortly after the game was featured in a few showcases which gained the attention of the Germany-based publisher Headup who offered a lot of the opportunities I have available now. This game would not be what is now without the help I received from them as well as the support gained from people all over the world who have been supporting the growth of my game. Thank you all so much! 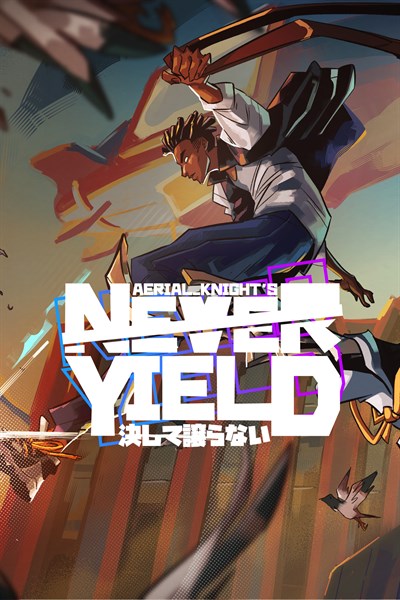 ☆☆☆☆☆ 1
★★★★★
$11.99 $10.79
Get it now
Xbox One X Enhanced
STORY Take the role of Wally. A mysterious character that has recovered what was taken from him. Hopefully, you're fast enough to outrun your enemies. Expose the truth and try to uncover the mystery of what happened to them. With an average runtime of an action movie (about an hour and a half on Normal), a first run of this action-packed adventure can be enjoyed in an afternoon. Afterwards you can improve your score. GAMEPLAY Aerial_Knight's Never Yield is a 3D side-scroller that plays much like a classic endless runner. The game has an interesting story that keeps players always in motion. Run, Jump, Slide or "Dash" for acrobatic variants leading to dope combinations and avoid the challenges that await. Aerial_Knight's Never Yield is being built for players who love to speedrun games while being an experience that casual players will enjoy as well. SOUNDTRACK This Soundtrack for Aerial_Knight's Never Yield is being done by "Danime-Sama" A Detroit artist with vocals from artists from all over the world. NOTE FROM THE DEV This project began as just a passion project I started on my own to create something familiar but new for this generation of gamers while highlighting aspects of a culture that is often overlooked. I really hope you enjoy the game once its released and follow my journey to create new and interesting games – Aerial_Knight