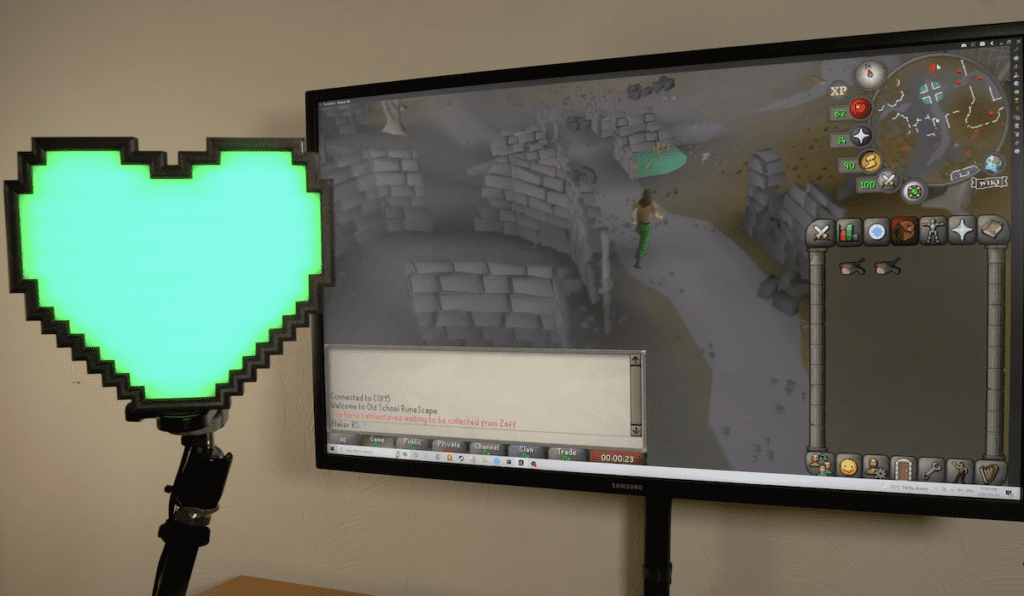 For those of us of a certain age, RuneScape provides a deep sense of nostalgia. The original RuneScape MMORPG died off in popularity many years ago, but Old School RuneScape, which launched in 2013, recently gained traction once again. As with most MMORPGs, Old School RuneScape gives the player a health readout in the form of hit points. Austin Blake wanted to see his character’s health in the real world and turned to Arduino to make it happen.

Blake chose to display his hit points on a heart-shaped LED array. It indicates health through both color and level. At full health, all of the LEDs light up in green. At half health, only half of the LEDs are lit and they light up in amber. The LEDs are strips of Adafruit NeoPixels and Blake controls them with an Arduino Nano Every board running the FastLED library. Those mount into a 3D-printed frame that Blake designed in Autodesk Fusion 360.

But in order to light up the heart accurately, Blake needed a way to pull his character’s hit point count from the game and send it to the Arduino. First he tried using image recognition, but that proved to be too complex. Then he found RuneLite, which is a third party Old School RuneScape client built on Java that allows for some customization. Blake coded a script that would print his hit points in the game chat every time they changed. At the same time, it sends the numerical value over the serial connection to the Arduino, which in turn displays it graphically on the LED array.