School’s out for summer! That’s a refrain that your kids likely will be singing for a couple of days, right before they launch into “We’re bored!” or “It’s too hot to go outside!” Trust us, we get it: you’ve got them signed up for summer camps and fun activities galore, but there comes a time when you just need to let them enjoy some quality gaming time at home. Well, we here at Xbox have got you covered thanks to Xbox Game Pass. You may already know that Xbox Game Pass features over 100 great games for the, low price of $9.99  a month, but did you know that over 75 of those games are rated E or E10+? As a public service to you, we’ve put together a handy-dandy list of titles for whatever type of gamers you’ve got in your family. Oh, and the first month is just $1.

The Young Ones – Great games for kids who are just starting to play on Xbox One.

This massive block-based game is the perfect introduction to games for both kids and adults. Creative mode allows players to safely experiment with navigating a digital world using a controller, and once they get the hang of the controls, there’s so much to create and explore. From building the home of their dreams (or the Greek Parthenon, if they’re feeling ambitious) to attempting to survive through a Creeper-filled night, there’s something in Minecraft for every gamer in your life.

THQ’s bright and beautiful platformer drops players into a world devoid of color (thanks to the efforts of the nefarious INKT Corporation) and in control of an amorphous blob, tasking them with bringing Chroma City back to life through the joy of painting. Well, painting might not be the best way to describe splattering buildings, landmarks, and even Chroma City’s denizens with color. de Blob is a sleeper hit that everyone in your family is sure to love.

You might be tempted to think of this as an update on the classic “avoid eating your own tail” mobile game, but it’s actually a highly enjoyable physics-based puzzle platformer. You’ll need to help the heroic serpent Noodle navigate around 4 unique environments by coiling his body around and through obstacles. Snake Pass is cute, colorful, and a lot of fun for kids who want just a bit of challenge.

The Tweens – Games for the older kids in your life.

It’s next to impossible to just pick one great LEGO game, especially since there are a bunch in Game Pass to choose from. Want to channel your inner Caped Crusader? Enjoy all three LEGO Batman titles! Love antiquities but hate snakes? Take LEGO Indiana Jones: The Original Adventures for a spin. Feel like everything is awesome? The LEGO Movie Game is just right for you. Best of all, these titles all support local co-op play, so your tween can invite a friend or sibling along on the adventure. 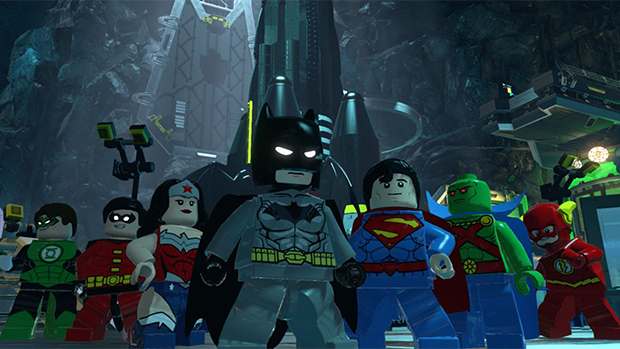 One of the most unique puzzle platformers ever made is perfect for helping your tween exercise both their mental muscles and their reflexes. Twisted Pixel’s over-the-top hero, the titular ‘Splosion Man, is a botched science experiment that is trying to escape from the labs of Big Science. However, rather than jump or shoot, our hero instead uses his own exploding body to launch himself through the air (hopefully through the game’s wide variety of traps and obstacles) or destroy enemies. As an added bonus, you can play with a friend and launch off each other’s explosion.

Max: The Curse of Brotherhood

If you’ve got a tween with a younger (possibly annoying) sibling, there’s a good chance they’ve daydreamed about making them disappear. That’s precisely what happens in Max: The Curse of Brotherhood, as our eponymous hero wishes for his brother Felix to disappear, only to learn that losing someone you love is terrifying. An entertaining blend of platforming and puzzles, the game’s gameplay hook revolves around Max’s enchanted magic marker, which your kid can use to do everything from drawing vines and branches to controlling fire and water.

The Sporty Kids – They can’t play outside all the time, but they can bring the action indoors.

Hailed by many as one of the best racing games ever made, our own Playground Games has created the ultimate open world driving adventure. Your budding driver can hop into one of hundreds of real world cars and make their way around a stunningly realistic British landscape, battling the elements as the seasons change weekly. With numerous things to do and collectables to grab, as well dynamic events popping up frequently across the world, you’ll never run out of stuff to do. 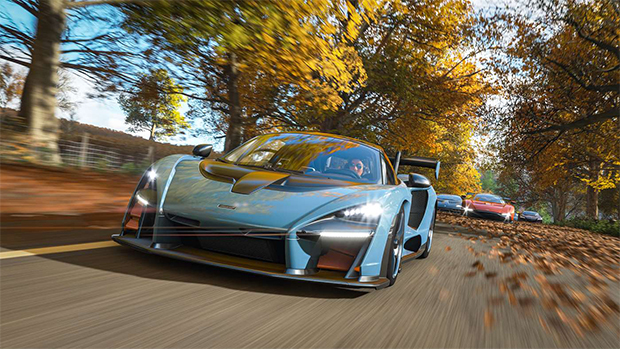 Even the most dedicated adrenaline junkie will want to strap on a helmet for this joyous downhill racing experience. Hop on a mountain bike and take off down the hill, jockeying for position with fellow riders and pulling off mammoth tricks along the way. Thanks to the game’s procedurally-generated worlds, your favorite extreme sports fan is guaranteed to have a fresh new experience every time you get to pedaling.

Are you ready for some soccer?!? One of gaming’s longest-running footy franchises is available on Xbox Game Pass, with the latest iteration offering up the most photo-realistic and lifelike players to date. In addition to many improvements on the field itself, there are a number of big changes off the pitch as well. From new leagues to MyClub updates for the general manager in your family, there’s a something here for football fans of every stripe.

The Life of the Party – Does it seem like every kid in the neighborhood is at your house? We’ve got you covered.

With its four-player split-screen action, this unique hybrid of soccer and driving is the perfect game for a big group of kids. As intense as it is fun, Rocket League is a prime example of “easy to learn, tough to master” gameplay. Kids might start off doing basic driving maneuvers and hitting the giant ball willy-nilly, but it won’t take long before they’re performing daring aerial “headers” and drawing up complex team plays. For those moments when your kid is playing solo, there’s a variety of AI-controlled opponents with multiple difficulty settings, as well as a plethora of game modes. 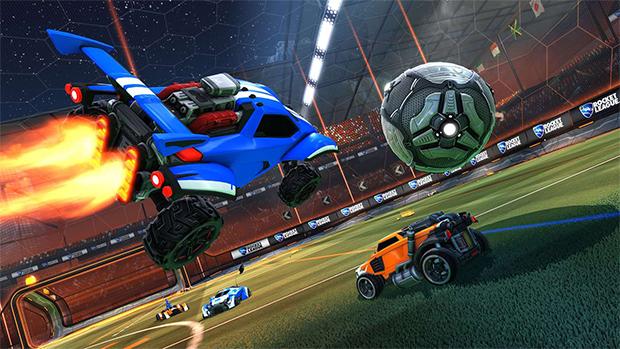 An absolute classic from the original Xbox era that still feels fresh and new today with tons of competitive play for up to four-players via local multiplayer. With more than 45 mini-games to pick from, Fuzion Frenzy is perfect for groups of friends for after baseball practice or during sleepovers (if you don’t mind the occasional screaming teenagers after lights out). This is one of those timeless games that feels like it’ll never go out of style.

While this game started off as a crowd-designed goof titled “It Draws a Red Box,” it has since morphed into one of the best family-friendly multiplayer games around. Supporting anywhere between two and eight players, IDARB is sort of a cross between a platformer, action game, basketball game, and pop culture explosion, all thrown together on one chaotic battlefield. Success requires quick reflexes and solid teamwork, but this is one of those rare games in which you’ll have a great time even if you’re not quite sure what’s going on.

The Summer Schooler – School might be out, but that doesn’t mean the creating and experimenting has to end.

Encourage your kids to embark on a fulfilling career in planning and community development by learning the ins and outs of city management this summer. Cities Skylines – Xbox One Edition is a critically acclaimed city builder that lets them create (from the ground up) their very own budding metropolis complete with a host of micromanagement features, public policies, and crisis management. It’s way more fun than it sounds, honest. 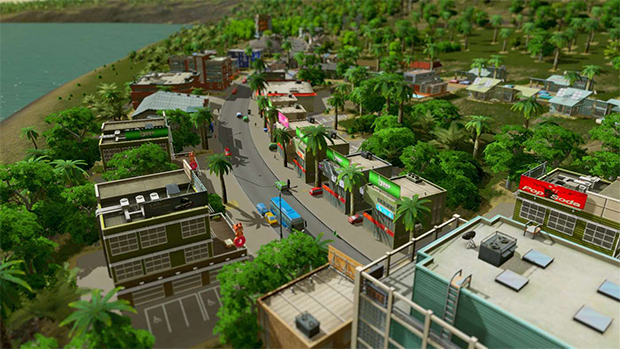 Instead of tracking in mud across your nice clean floors, let your kids get their virtual boots dirty in Farming Simulator 17. They can manage hundreds of acres of land, drive awesome farming vehicles, and tend to livestock like cows, sheep, and chickens. They can also hop online and download community created mods for an ever-expanding experience on Xbox One.

Let your kid’s imagination run wild. Build, manage and maintain your dream zoo alone up to four players. Design the optimal sanctuary with customized animal pens while learning about each of their inhabitant’s needs, behaviors, and what works best to entice visitors to their attractions. Get up close and personal with nearly 200 visually stunning animals. This experience let you do everything from adopting your favorite animals to releasing them back in the wild to adjusting and decorating enclosures to piece-by-piece road construction. In this zoo, the choice is yours.

Taking one part roller coaster designer and one part demolitions expert, ScreamRidelets your kids both learn the joy of creation and destruction – all for the sake of creating the most epic (and safe) rides for their virtual thrill seekers as they solve complex construction puzzles and lay down efficient demolition explosions to make way for the creation of the most impressive rides.

Build and battle and build some more. That’s the theme for Robocraft Infinity that lets your favorite designer combine blocks to build their own vehicles and robots and then put them into the arena against other players online to see who’s creation can come out on top. Make jets, cars, tanks, helicopters – they are all possible thanks to the easy-to-use in-game editor. They can also share their designs online or browse and download other creations for added inspiration.

Two iconic gaming characters return in a unique adventure that requires more brain than brawn. Like the aforementioned Robocraft Infinity, players will build unique vehicles to compete in a variety of challenges in this off-shoot of the classic Banjo Kazooie series. Impress the L.O.G. (Lord of Games), defeat B&K’s nemesis Gruntilda, and create the most awe-inspiring vehicles to win!

These are just a handful of the awesome family-friendly titles available via Xbox Game Pass (psst, there’s plenty for the grown-ups, too!), so we hope they offer you the perfect way to stave off those summer doldrums. Stay cool and game on!