Nearly seven years have passed since the last mainline Borderlands game, and the world is ready for a return to Claptrap’s turf. If you played the previous entries, you know to expect gonzo co-op action with an emphasis on outlandish weaponry. While Borderlands 3 delivers the first-person, looter-shooter goodness you’d expect, it also comes with a host of enhancements to the formula. More cathartic weapons, diverse character classes, copious quality life changes, and more. These are the bad-ass details that impressed me from a recent hands-on session.

Borderlands is all about scoring progressively stronger weapons and laying waste to your enemies with them. These tools of destruction feel more satisfying and impactful than ever. In addition to damage numbers popping above enemies’ heads, weapons now have convincing impact and feedback. A doomed bandit may go flying across the map from a shotgun blast before clambering to his feet for more punishment. The clear, punctuating sound design of each concussive blast or rata-tat-tat drives the satisfying feeling home.

A cornucopia of bonkers firearms

Speaking of guns – they are bountiful and each one feels special. Wield a submachine gun that turns into a mini-turret when you reload. A weapon that needs to be doused with water when it overheats. Hold the trigger to charge up an elemental incendiary or corrosive blast. These wonderful toys have personality and variety in spades.

I’ve never had so much trouble picking which character class to run with in a Borderlands game — they’re all enticing. Moze’s summoned mech, Iron Bear, grants her beefier armor, shields, and shoulder-mounted artillery that wrecks shop. FL4K can cloak himself and send his trusty Skagg or Rakk pets to harass goons for him. Amara — the Siren — summons spectral arms to trap and smash fools. Zane’s shady secret agent background lets him unleash drones and pop up distracting clones (which he can then teleport to). I can’t wait to see how these Vault Hunters complement one another in the long run.

Many guns in Borderlands 3 feature an alternate fire (press the down directional button) that spices up combat. A scoped mini-gun clicks into a powerful sniper rifle. Swap between elemental attributes to freeze then flame the opposition. Unleash a barrage of explosive rockets with your pistol. Each time I snagged a weapon with alt-fire, I was thrilled because it’s essentially two guns in one. 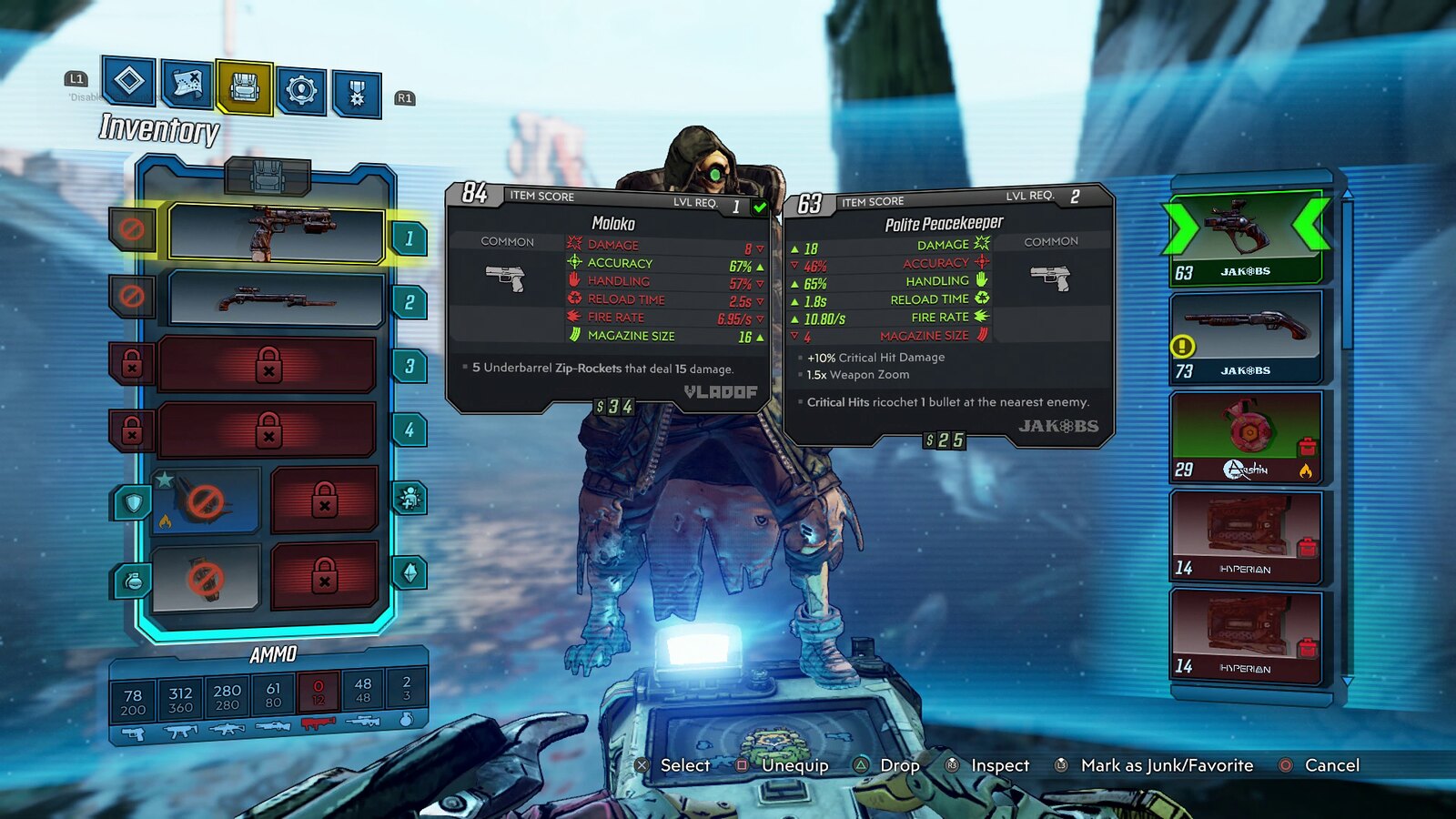 Weapons, grenades, and shields come with a lot of stats, and comparing loot can be a process. Obsessive min-maxers can still lose themselves in the details, but everyone else can reference a handy Item Score. This go-to distilled number gives players a good idea of whether the new loot they scored is an upgrade. I love that this new quality-of-life feature because it lets me equip new gear quickly and get right back into the action. No time wasted with lackluster sidegrades!

Prepare for the best-playing Borderlands 3 game yet — and we’re talking more than just weapon handling. Mantling up ledges feels liberating, and Gearbox uses it to great effect with thoughtful environmental puzzles. Sliding also makes a dramatic series debut. At one point I sprinted towards an explosive barrel, slid across the ground, and melee’d it into an enemy — all in one smooth, satisfying sequence.

The humor is ridiculously on brand

Okay, so not gameplay per se, but Borderlands 3 is a riot. One unforgettable mission on the lush Eden-6 features Balex, a sentient AI voiced by the inimitable Ice-T. The foul-mouthed Balex loses access to his primary “body” in some mishap and is temporarily inhabiting a ratty, dilapidated teddy bear. His mission takes you deep into an overgrown facility infested with nasty creatures called Ratch. Turns out these slimy parasites are… communicable… and the AI operating the facility is a scorned lover of Balex’s dealing with the scourge. I won’t spoil the twists and turns, but this ludicrous mission goes places.

Running and gunning through the blasted landscape of Pandora is still lovely, but new environments like Eden-6 really shake up the scenery. For example, Eden-6’s destinations range from deadly forest, to tree-top village, to derelict high-tech facility. Gearbox has also teased bustling futuristic cities, treacherous swamps, and more.