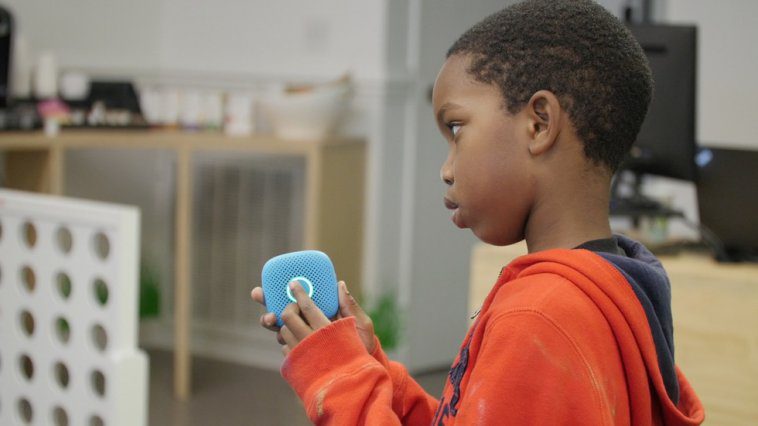 The Relay is a safer alternative to smartphones created for parents worried about keeping in touch with their kids when they’re out and about. Republic Wireless used 3D printing technology to speed up the prototyping process and develop new iterations of the walkie-talkie styled device.

Being a parent is no easy feat, especially when you have an adventurous child that loves to explore their surroundings. In the age of smartphones, it’s not too difficult to stay in touch with your kids, but the phone itself isn’t the most secure device for youngsters to use.

Republic Wireless, the US-based mobile virtual network operator, recently launched a product that will enable parents wishing to keep tabs on their children.

The Republic Wireless Relay is a device that strictly resembles neither a phone nor a walkie-talkie, instead it combines the functionality of both. This device is a sizable colored square equipped with a big button in the middle, which sends walkie-talkie messages to other Relay devices and a parent’s phone. Moreover, 3D printing technology was exclusively used in the prototyping process of this product.

The Relay has been specifically created for kids aged 6 to 11. According to Chris Chuang, CEO of the company, the idea came to him when his own kids got lost in the woods and he couldn’t find them. It turns out they were playing hide and seek.

Based on a classic walkie-talkie design, the Relay took two years from concept to creation. Using a MakerBot 3D printer and Raspberry Pi boards allowed the company to quickly make changes to the prototype. The 3D printed device took some trial and error to arrive at its final version. While smaller iterations took just two to three months, larger-scale enhancements took four to five months.

Republic Wireless made numerous changes during the prototyping process, dealing with issues like wear and tear, low-volume speakers, adding a lanyard loop, and so on. The final version of the Relay offers parents a secure way to communicate and check-in on their children.

Messages sent to the device disappear after being received and phone calls cannot be made. In return, this protects the system from nefarious acts from hackers. Since there is no personal data is stored on the device, it cannot be used by third-parties. On top of that, all of the messages are sent through a secure TLS.

To ensure that the tool was kid-friendly, Republic Wireless also engaged kids to pitch in their own ideas, which lead to the development of an echo that repeats the owner’s words in a humorous voice.

An alternative solution to the smartphone

The Relay is a great alternative to a phone for children. Although around 25% and 15% of 9-year-olds already have a smartphone in the UK and US, respectively, parents are rightfully worried that their children may spend too much time in front of the screens.

“Parents are looking for ways to get their kids to take a break from using phones, if they have them, and trying to minimize screen time,” explained Jennifer Hanley, Vice President of Legal and Policy for the Family Online Safety Institute (FOSI).

Apart from time spent, phones for children aren’t without risk. Indeed, parents worry about privacy issues, hackers and fraudulent activity. At least one third of parents now believe the risks of phones outweigh their benefits for kids, according to FOSI.

That’s where Wireless Republic comes in. The company sought to find an alternative to allow parents to stay in touch with their children. In fact, early testing suggests that kids have been enjoying their time with the Relay.

For instance, PC Mag’s Sascha Segan gave a Relay to his 12-year-old daughter who enjoyed using the device with her friends. At the same time, it doesn’t quite work as a standalone since kids still use computers and phones to organize the time to talk on the Relay. Therefore, it’s more of a toy than it can be smartphone replacement. And, with a price of $149 for two Relay devices, it’s not exactly the cheapest toy either.

While the Relay doesn’t offer the versatility and functionality of a smartphone, it does provide more protection for adventurous kids, as well as a peace of mind for concerned parents. And, thanks to the prototyping capabilities of 3D printing, Wireless Republic has been able to develop and release this communication device to the market as quickly as possible.

License: The text of „3D Printing Used to Develop Walkie-Talkie Device That Helps Parents Keep Tabs on Kids“ by All3DP is licensed under a Creative Commons Attribution 4.0 International License.