22 Years Later And Crash Bandicoot Is Still As Incredible As Ever | Blogdot.tv 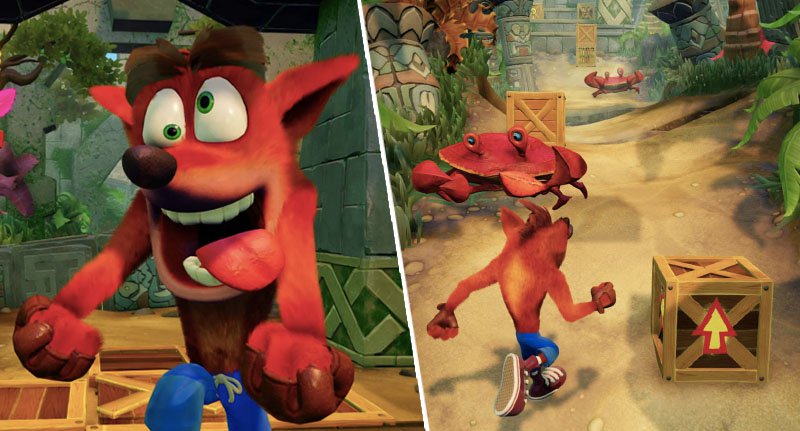 Today, June 28, Xbox, Switch and PC gamers will finally get to experience the dizzying joy and teeth grinding frustration of the Crash Bandicoot N. Sane Trilogy.

So to celebrate the remastered release of one of gaming’s biggest franchises, shipping a box-crushing 50 million copies worldwide, we thought we’d take a look back to a simpler time.

A time before online multiplayer, loot boxes or battle royales, to the origins of Crash and examine what makes him such an iconic character.

Created by Andy Gavin and Jason Rubin while they worked for Naughty Dog, Crash Bandicoot was originally exclusive to the then-brand spanking new PlayStation console.

Andy and Jason initially began work on the game in 1994, and took full advantage of the relative power of the PlayStation, abandoning traditional 2D platforms for something a bit more complex, a ‘3D action-platform game’.

As ridiculous as it may sound, in a world where games can render whole worlds on the fly, this was a pretty bold idea at the time, as only racing, fighting and shooting games had entered the third dimension.

Enthralled by the notion of a fully 3D platform, the pair threw out the side-scrolling game they were working on and they began to develop what would become Crash, but then was jokingly known as ‘Sonic’s Ass Game’.

The rather rude nickname came about when the pair, fantasising about what a fully 3d platform player would look like, realised the player would spend an awful lot of time staring at the main character’s posterior.

Despite this concern, the pair continued to work on the game, believing the idea had promise.

Deciding to develop it for the new and ‘sexy’ Playstation, Universal set a development budget of $1.7 million for the game and Naughty Dog began the next stage of the project, designing the main character worthy of their grand 3D ambitions.

Taking inspiration from Sonic the Hedgehog and Warner Bro‘s Tasmanian Devil character, Naughty Dog bought a book of Tasmanian animals to search for something which was ‘cute, real, and no one really knew about’.

In the end, they chose three animals as options, the wombat, potoroo, and bandicoot – three animals which look pretty similar if we’re being honest, and artists, Charles Zembillas and Joe Pearson, were recruited to work on the character.

Zembillas and Pearson eventually settled on a design and the character – who would become Crash – was temporarily named ‘Willie the Wombat’.

Taking advantage of their (as of then) unnamed character’s vague Tasmanian origins, Naughty Dog decided to set the games on a secret tropical island, and worked hard to create lush overgrown environments which would hide obstacles from the player.

Unfortunately, it was here they hit a snag.

While they’d populated their jungles with traps, puzzles and enemies, it still felt oddly empty due to the Playstation’s inability to render multiple enemies at once.

Initially, they attempted to remedy this by filling the world with collectable fruits called ‘Wumpa fruit’, but even then the world felt oddly empty, and it wasn’t until super late in the development process Andy hit upon a solution.

They could fill the world with breakable crates as an added obstacle or puzzle for players to navigate.

By now, the game was taking shape but Naughty Dog still needed a villain for ‘Willie the Wombat’ to battle. Inspiration apparently hit while the team was eating a mediocre Italian meal.

Drawing inspiration from another Warner Bros character, this time Brain of Pinky and the Brain fame, Dr Neo Cortex was soon born, along with his minions based on the weasels from Who Framed Roger Rabbit.

Still though, this new nefarious villain couldn’t seriously face off against a good guy called Willie the Wombat, could he?

Well, Naughty Dog were emphatic in their belief he’d not be called that,  and while preparing the game for E3, they finally decided upon his name – ‘Crash Bandicoot’ – drawing inspiration from the fact he ‘crashed’ through the crates.

Unfortunately though, Universal allegedly thought differently, suggesting the character instead be called ‘Wuzzle the Wombat’ or ‘Ozzie the Otzel’.

However Naughty Dog managed to convince Universal to let them name the game in the end, and the rest is history.

Crash Bandicoot went on to be a smash hit with critics, praising the next generation of graphics, the gorgeous environments, and Crash himself, who was praised for his appearance and hilarious mannerisms.

The game went on to sell over six million units worldwide making it the eight best selling PlayStation game ever made.

It spawned several sequels including The Wrath of Cortex and Warped (both of which are included in the N. Sane Trilogy).

So what made Crash so iconic? Well, there are a couple of factors, the first and most important being, he was designed to be the PlayStation mascot and therefore, has an enduring legacy.

While the concept of a console mascot may have fallen by the wayside these days, back in the early Nineties, games companies still entertained the idea they needed a character synonymous with their consoles.

And while there’s a decent argument to be made for Lara Croft being the PS1 mascot, I think Crash edges her as visually he’s closer to his esteemed competition – Mario and Sonic – and he has the advantage of coming first.

Crash served as Sony’s unofficial PlayStation mascot until the end of 2000, when his games became cross-platform, which gave him five years as the face of the biggest console on the planet (Don’t @ me Nintendo fans).

Not only that, but it’s worth remembering how novel a 3D action platformer was at the time, and while Crash Bandicoot may have been beaten to the punch by Mario 64, the game was one of the first of its kind available on the PS1.

Finally, as I’ve already pointed out, Crash was one of the best selling games ever made for the PlayStation and with good reason – it was a challenging and fun game to play, which people remember fondly.

Isn’t it great that, after so many years, Nintendo, Xbox and PC gamers can experience the joy of playing such a wonderful game?