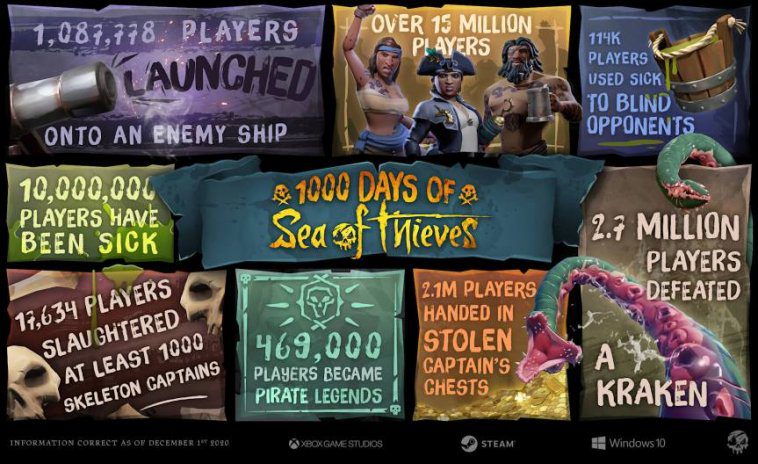 Millions of treasures taken. Scores of skeletons smashed. More bunches of bananas cronched than we can possibly count – it’s been a wild ride across the waves in the 1000 days since Sea of Thieves hit shelves and storefronts for players around the world to enjoy! Here’s a small selection of the many and varied ways in which pirates have spent their time upon the seas:

Naturally, we weren’t about to let such a marauder’s milestone pass without using it as an excuse for a good time and a few giveaways. Let’s begin with the game itself: as Sea of Thieves’ 1000th day falls on December 14th 2020, any players who log in and play between December 13th and December 16th (10:00 UTC) will receive a commemorative 1000 Days Eyepatch emblazoned with a red Roman numeral ‘M’. (Who says pirates have no appreciation for history?) And players who’ve been with us from the beginning will receive a very distinguished golden ‘M’ edition eyepatch, to thank them for being loyal looters since the start.

And that’s not all we have to announce… you asked, we listened, and the Sea of Thieves: Athena’s Fortune novel is getting its very own audio book treatment! Read by accomplished actor Toby Stephens (Black Sails, Lost in Space) and making full use of music and effects taken from the game, Athena’s Fortune chronicles the intertwined origins of the infamous Pirate Lord and Bilge Rat leader Larinna, who’s recently become well-known to players by taking up her in-game post outside the tavern.

The red eyepatch will be delivered to players within 72 hours of logging in, while the golden version will arrive next week after the window has closed and eligible pirates have been identified!

We know a lot of fans old and new have been requesting a spoken rendition of this Tallest of Tales, so it’s a great pleasure for us to announce the enhanced, unabridged Athena’s Fortune adaptation on our 1000-day milestone. It’ll be available to stream and download early next year, free of charge on selected services. Until then, you can feast your eyes upon a sample of the audio book’s snazzy cover artwork, created by artist Iolanda Zanfardino, at the top of this post.

Speaking of Athena’s Fortune, that legendary Galleon’s golden nameplate is one of many new treasures now available to pre-order from the Rare Store – an ideal way to transform any home into your very own Tavern of Legends and stay safe and warm during the winter months!

We’ve also added a trove of new games and puzzles to keep you entertained, including official Sea of Thieves Top Trumps, an ocean battle jigsaw and the very exciting Sea of Thieves X Monopoly Limited Edition, which sees the classic game lovingly wrapped up in familiar Sea of Thieves locations and adventures.

Last but certainly not least, should you fancy refreshing your recollections of the game to date (or if you’re a newer player who’d like a crash course on all that’s gone before), look no further. We’ve prepared a trip down memory lane with a 1000 Days video celebrating the adventures added to keep the pirate life exciting over the weeks, months and years since launch!

It’s been an unforgettable time watching the game expand and evolve since its 2018 debut. On behalf of the whole team we’d like to say thanks to everyone who’s sailed together with us for either part or all of the journey, living their pirate life as a seasoned adventurer, party pirate or battle-scarred Reaper, and we can’t wait to share more about what’s ahead in the new year. The best, as they say, is yet to come.

Until then, don’t forget to examine your very own Story So Far to see how you contributed to Sea of Thieves’ numbers in 2020! We hope you all enjoy a merry Festival of Giving as you continue your pirate odyssey (remembering to collect your 1000 Days Eyepatch along the way, of course) and, until next year, we’ll see you on the seas!