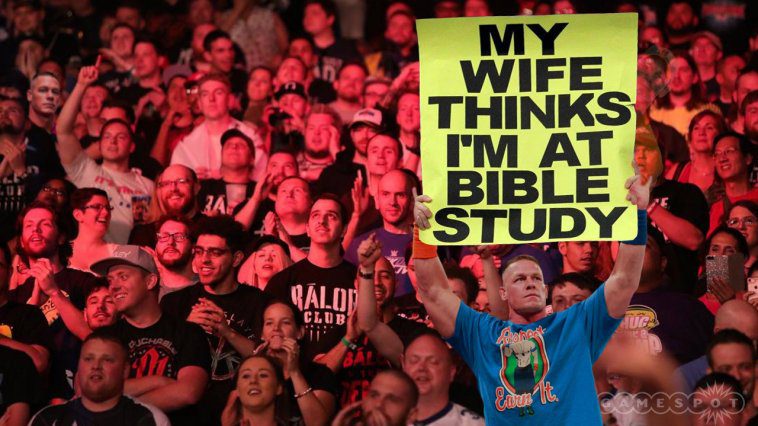 The Undertaker has been a staple of Wrestlemania since his first appearance at Wrestlemania VII, when he defeated Jimmy Snuka back in 1991. Since then, he has gone 23-2 in his Mania career with losses coming from Brock Lesnar in 2014 and Roman Reigns in 2017. Now, Undertaker will take on John Cena, and while the match has not been officially announced, there is no way WWE would build up this contest and not have it happen during the company’s biggest PPV of the year. And when it finally happens–even though John Cena put his heart and soul into the build–Taker will come out on top.

This whole storyline began with the 25th anniversary of Raw, back in January, where Undertaker showed up and gave a cryptic and confusing segment about… well, we’re still not sure. It came off more as the ramblings of a madman vaguely talking about himself with lots of metaphors. You can see it in its entirety in the video below.

That was the last time we saw Undertaker on television, and it didn’t make any sense. What was the purpose? Did he want to fight someone at Wrestlemania or did he just want to say „hi“ to his fans in the most confusing way possible? From Taker’s side of this story, that’s all we’ve gotten.

Meanwhile, John Cena came out on Raw back in February, a beaten man with low morale. He didn’t have his own road to Wrestlemania, but he wanted to be on the show. So he cut a fantastic promo and challenged the Undertaker. The crowd went nuts, and even Cena haters could get behind the emotion he put behind his words.

But nothing happened. There was no response from Taker, and week after week, Cena came out and delivered some of the best promos of his career, only to be yelling at an invisible brick wall. In turn, his story quickly became stale and repetitive because there was no response, so all Cena could do was reiterate his message, every week.

Now, according to this story, Cena will be attending Wrestlemania as a fan–hopefully sitting in camera shot, the entire time, eating popcorn and holding a dumb sign–enjoy my interpretation of that below. However, considering how much WWE has pushed this storyline, including writing about it on the company’s website, there is no way this match isn’t happening, and it will seem like a „spur of the moment“ match during the middle of Mania.

When this match actually happens, who is going to win? Considering how bizarre this storyline is, with John Cena acting like a bully, this match doesn’t have a strong face or heel. It’s just two characters in the middle of the road. Given how Undertaker went out last year, beaten down by Roman Reigns in what is one of Taker’s worst Wrestlemania matches, I’m thinking Taker will go out on top.

Depending on Taker’s level of fitness, John Cena can carry matches when needed, and he’s great at making his opponents look better than they are in the ring. You can hate the character all you want, but Cena is a ring sergeant and knows how to put together a great match. It shouldn’t be as long as last year’s against Roman Reigns, where Taker seemed winded a few minutes in, but it also shouldn’t be a squash match. John Cena still needs to look like he’s a powerful force in the WWE for the next few years before he leaves the company for good. Don’t expect a repeat of Cena/Lesnar from a couple of years ago.

What does this mean for the future of these wrestlers? Well, Undertaker will probably not return to the ring; however, I thought the same thing last year. John Cena will go back to being John Cena on whatever show he feels like appearing on. The match doesn’t really mean anything for either character. It’s just a match, but regardless of what WWE 2K18 predicted in the video above, this should be Taker’s last match–and he’s going out on top.

Keeping checking in with GameSpot this week for more news, predictions, potential pee breaks, rumors, and live coverage of Wrestlemania on Sunday, April 8, which airs on the WWE Network.