Hack your COZMO for ultimate control, using a Raspberry Pi and this tutorial from Instructables user Marcelo ‘mjrovai’ Rovai.

Full integration The complete tutorial can be found here: https://www.instructables.com/id/When-COZMO-the-Robot-Meets-the-Raspberry-Pi/

COZMO is a Python-programmable robot from ANKI that boasts a variety of on-board sensors and a camera, and that can be controlled via an app or via code. To get an idea of how COZMO works, check out this rather excitable video from the wonderful Mayim Bialik.

COZMO’s creators, ANKI, provide a Software Development Kit (SDK) so that users can get the most out of their COZMO. This added functionality is a great opportunity for budding coders to dive into hacking their toys, without the risk of warranty voiding/upsetting parents/not being sure how to put a toy back together again.

By the way, I should point out that this is in no way a sponsored blog post. I just think COZMO is ridiculously cute…because tiny robots are adorable, no matter their intentions.

For his Instructables tutorial, Marcelo connected an Android device running the COZMO app to his Raspberry Pi 3 via USB. Once USB debugging had been enabled on his device, he installed the Android Debug Bridge (ADB) to the Raspberry Pi. Then his Pi was able to recognise the connected Android device, and from there, Marcelo moved on to installing the SDK, including support for COZMO’s camera. 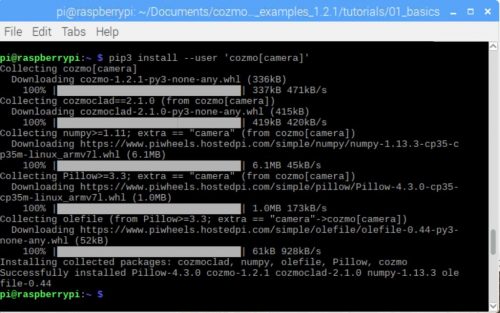 The SDK comes with pre-installed examples, allowing users to try out the possibilities of the kit, such as controlling what COZMO says by editing a Python script.

Hello World The complete tutorial can be found here: https://www.instructables.com/id/When-COZMO-the-Robot-Meets-the-Raspberry-Pi/

Do more with COZMO

Marcelo’s tutorial offers more example code for users of the COZMO SDK, along with the code to run the LED button game featured in the video above, and tips on utilising the SDK to take full advantage of COZMO. Check it out here on Instructables, and visit his website for even more projects.