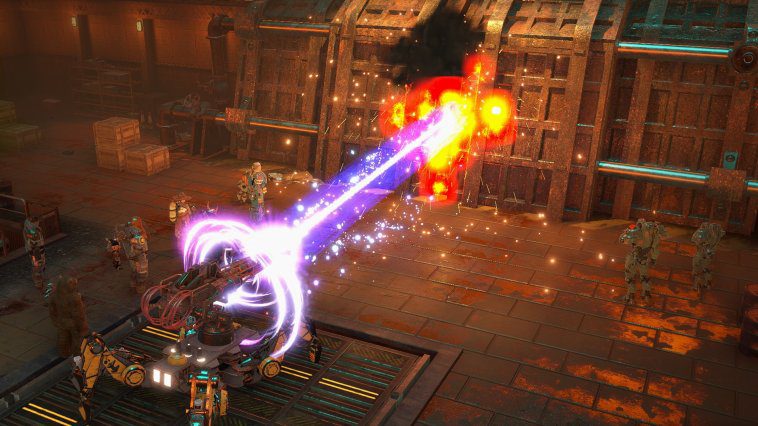 The Wasteland 3 team here at inXile is very excited to announce the first narrative expansion for Wasteland 3: The Battle of Steeltown will be releasing June 3. Since the game’s launch last August, we’ve been working on adding new features, quality of life changes, and fixing bugs and improving game stability and performance. But in the background, far from prying eyes, the team has been focused on creating new story-driven content.

The Battle of Steeltown is a narrative expansion to the core game of Wasteland 3—slotting into the game’s story and adding new locations, quests, gear, and adding new twists to our tactical combat. Steeltown sits as the manufacturing hub of Colorado, and the Patriarch—the region’s self-proclaimed ruler—relies on Steeltown to keep him in power. It’s responsible for keeping his guns firing and his vehicles running, but lately things have been … wrong. Shipments are arriving late, with the wrong items, or are just outright missing, and with the Plains Gangs threatening his sovereignty these aren’t problems he can just hope will fix themselves. That’s where you and the Rangers come in.

The Battle of Steeltown is the first DLC we’ll be releasing for Wasteland 3, and will be available for $13.99 on Xbox One (playable on Xbox Series X|S via Backward Compatibility), and on PC for Windows 10 and Steam on June 3. Xbox Game Pass members who want to purchase The Battle of Steeltown DLC save 10%. We’re looking forward to sharing more about the content, items, and unique combat mechanics in the weeks ahead. Stop by inXile-entertainment.com to keep up on the news, and of course we invite you to follow along on Twitter @Wasteland and join the Ranger.HQ on Facebook.

We also just launched the official Wasteland collection last week on the Xbox Gear Shop, including tees, a hoodie, tank tops, an ever-important Desert Rangers flask, and more. No longer will you need to scream “Wasteland 3!” while grocery shopping—now you can simply let people see it printed on your clothing. Head over to the Xbox Gear Shop and let your clothes do the screaming for you.