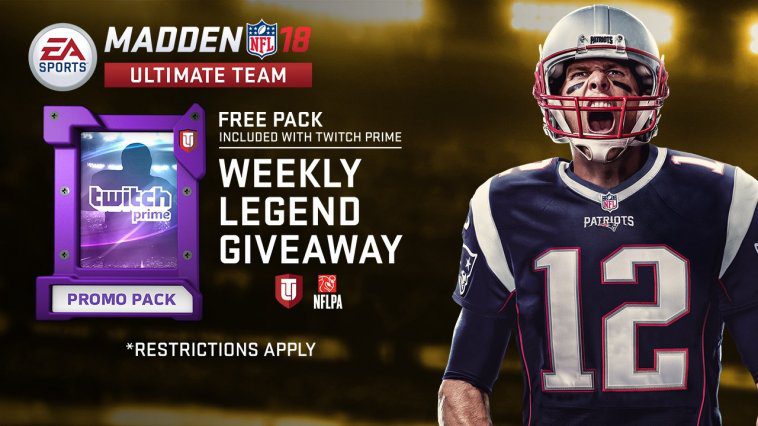 Put a lock on your opponents with this week’s Twitch Prime Legend DB Troy Vincent, with an 83 OVR!

Drafted by the Dolphins number 7 overall (but number 1 in our hearts), Troy played chess while his opponents playing checkers. He read minds, jumped routes, and balled hard. Finishing with 749 tackles, 47 picks, and 5.5 sacks. He was a 5x Pro Bowler, 3× All-Pro, and the NFL Interceptions Co-Leader in 1999. He was like an annoying little brother, following receivers everywhere they went and messing with their life.

Post career, he became like an older brother as president of the NFL Players Association where he guided players through their careers and helped them prepare for life after football. He is now the NFL’s head of Football Operations and involved in a number of philanthropic activities. Troy is good at the game of football and good at the game of life.

About Twitch Prime Legends
We’re teaming up with EA Sports Madden NFL 18 to give Twitch Prime Members at least an 83 rated Madden Ultimate Team Twitch Prime Legend and Collectible every week from 8/22–2/3. That’s up to 25 retired NFL ballers for you to add to your roster, plus collectibles to jack up their stats to a 90 OVR.

When you join Twitch Prime, you can claim your 83 rated Troy Vincent + 1 Collectible in addition to an 85 OVR Reggie White + 5 Collectibles, allowing you to automatically start with a 90 OVR Legend immediately. So start a free 30-day trial, or link your current Prime account to Twitch here.

NOTE: Throughout the promotion, Twitch Prime Legends will be available to players who have claimed them for 30 days after the Twitch Prime Legend is release. Players must log into Madden at least once every 30 days to receive weekly content.

Watch Twitch Streams to Get Even More MUT Content!
As if that weren’t enough, Twitch viewers can earn even more goodies just for watching their favorite Madden broadcasters — all through the magic of Twitch Drops. Every Friday from now until the end of the NFL season, we’re teaming up with EA Sports to feature select members of the Madden streaming community. Tune into one of these Friday streams and you’ll have a chance to win a Madden Ultimate Team pack. To find out which channels are part of the fun throughout the season, be sure to keep an eye on twitch.tv/eamaddennfl.

To learn more about our Madden benefits go to twitch.amazon.com/madden.

What is Twitch Prime?

Twitch Prime is a new premium experience on Twitch that is included with Amazon Prime. Benefits include monthly in-game loot, ad-free viewing on Twitch, a channel subscription every 30 days AND all the benefits of being a prime member. See all the Twitch Prime benefits here.

Check out the full list of Amazon Prime benefits in: US, UK, Canada, Germany, France, Austria, Belgium, Italy and Spain. You can try it for free for 30 days right here, and when you do, you get all the Twitch Prime benefits instantly just by linking your Twitch account to your Amazon account.

Prime Now
One and two-hour delivery on tens of thousands of items from Amazon and local stores. Check out Prime Now.