The Guest Writers of The Church in the Darkness | Blogdot.tv

I’m pleased to say that The Church in the Darkness is finally coming to Xbox One on Friday, August 2!

Our game has a dark narrative told through infiltration gameplay, as you try to get inside an extremist cult in the 1970s, looking for your nephew Alex. We use dynamic narrative techniques to make sure each playthrough tells a unique story. Today I’m here to tell you about some guest writers we lined up to flesh out the world and why they’re so important to me. It was an honor to have Chris Avellone, Marc Laidlaw, Steve Meretzky, Brian Moriarty, and Brenda Romero all contribute to the game.

Building the world of Freedom Town has taken a long time. By that I mean not only the physical structures, but also the characters that go in it. This is a community full of people who felt like they couldn’t live in the “normal” world, and retreated to a commune in the jungles of South America. They are labeled a “cult” by mainstream society. But everyone in the Collective Justice Mission thinks they are doing their best to make their lives and the world better. 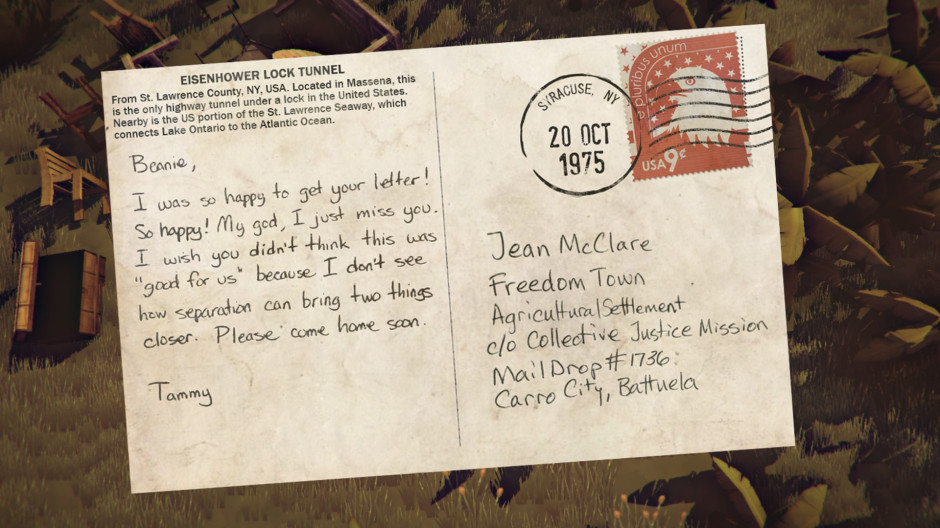 Though Preachers Isaac and Rebecca Walkers are the main characters, it was also important to tell the stories of their followers. What sort of person joins a cult? Then I had an idea: wouldn’t it be interesting to get some other writers to flesh out the townspeople?

One of the great perks of being in the game industry is how accessible most designers and writers are. If you’re someone who grew up looking at game credits and wondering about the people who make these games you love, when you get in the industry there’s a good chance you can meet those people. And almost all of them welcome conversation. Over the years I had met many of the people who inspired me, so I thought it would be great to get some of them to fill out the characters in The Church in the Darkness.

The first person I asked was Steve Meretzky. I adored the interactive fiction he created at the legendary Infocom games like Planetfall or The Hitchhiker’s Guide to the Galaxy or the under-appreciated A Mind Forever Voyaging. AMFV was one of the first games I encountered that showed how a game can unflinchingly tackle serious subject matter. Steve agreeing to do some writing for my game got me genuinely excited, and it inspired me to seek out more writers.

Soon after I talked to Marc Laidlaw, whose writing on the Half-Life games took the high camp standards of 90s FPS games and completely stripped it away, showing you could take Harlan Ellison style SF and make it work in a fully interactive world. I knew Marc had a strong thoughts about 70s cults, so I was delighted when he agreed to contribute.

Next up was Brenda Romero, whose work dates back to the original Wizardry games, one of the “big three” of 1980s CRPG franchises.  Brenda has fascinated me with her ability to reinvent herself over the years, from GDC lectures about sexuality in games to transitioning to her “The Mechanic is the Message” series of physical art piece games, including the widely acclaimed Train.

Then there was Brian Moriarty, author of one of my favorite games, Loom, a take on the graphic adventure that removed the words and replaced them with music, making something profound in the process.  Like Steve, Brian also worked at Infocom, where he wrote and designed Trinity, a game whose serious look at nuclear annihilation was a revelation.  Along with Meretzky’s AMFV it remains on interactive fiction best-of lists to this day. 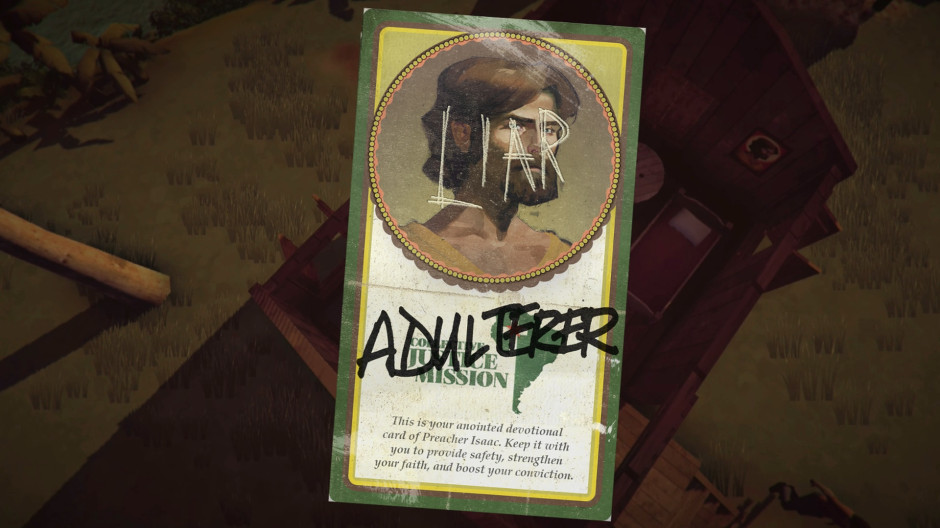 And last but certainly not least was Chris Avellone, known for writing RPGs from Fallout to Knights of the Old Republic and everything in between. In particular, he led the creation of Planescape: Torment, a game that showed you could bring a literary sensibility and dark, unconventional subject matter to the traditional RPG, elevating it beyond the widely accepted constraints of the time.

Each of these writers wrote supporting characters who you learn about through letters, journal pages and other documents found around Freedom Town. It was interesting to see what part of the Collective Justice Mission they each wanted to expand. Marc and Brenda both told stories of people with their own challenges back in society who joined looking for space to belong. As Brenda put it: “As a kid, I was an extreme outsider. I listened to heavy metal, I played D&D, and I loved to code. I didn’t know how to fit in and then decided I didn’t care if I did. I found my own tribe years later, but I can deeply sympathize with someone looking for a community, for a sense of belonging. I’ve been there.”

Chris focused on a troublemaker, someone who tries to ratchet up paranoia and latches on to the darker instincts of the leaders. And interestingly Steve and Brian independently decided to use ciphers and hidden messages in the documents they wrote, fitting since such puzzles were fixtures of the old Infocom games. When I asked Steve what he thought of this coincidence, he said: “Great minds often think alike. And Brian and my mind may, on occasion, think alike as well.”

Several of these writers had their own personal experiences with cults, particularly in that pivotal period of the 1970s. Marc Laidlaw had the most vivid recollection: “I grew up in Southern California in the ‘70s—a place and an era steeped in cults. The Manson murders and subsequent trials colored my childhood. We watched the news from Jonestown on a TV in my dorm. These experiences were all filtered through the media, of course, and quite impersonal. But one morning, while riding my bike down a short-cut through an alley to school, I saw a woman pushing a stroller shot and killed by her husband; it turned out he had shot her for leaving the local Krishna community. She had left the church so that their daughter could attend school. If one can be said to have an ‘informed’ opinion on cults, then witnessing a murder is what informed mine.”

The story of The Church in the Darkness can be a dark one, depending on how the dynamic systems push elements in a given playthrough and depending on which choices you make with a given scenario.  But  no matter how bleak, there’s always an opportunity for redemption. Bringing in these guest writers fleshed out the world in surprising ways, showing the people who might redeem Freedom Town.

They each brought their own take on what sort of person joins a cult.

The Church in the Darkness launches August 2 for Xbox One on the Microsoft Store. Click here for pre-order details.

Related:
Getting Up Close and Personal with Spiritfarer’s Gwen the Deer Spirit
Challenge the Syndicate in Warface Battle Pass: Season 2 on Xbox One
Call of Duty: Modern Warfare Multiplayer Premiere Reveal is Live on Mixer