We are one day away from the start of the most exciting season of Forza Racing Championship yet. That means it’s time to drop some last-minute details about how the ForzaRC Invitational Series 2019 is going to play out.

This season is all about teams – three drivers and a coach. The decision to move to a teams format was a huge one, and we knew it would open the doors to a whole new level of competition. Being the fastest racer on the field is no longer a guarantee of victory, and everything you think you know about these drivers and teams can change in an instant.

First off, we’ll be hosting six weeks of online competition. Here’s the structure of each match and round: 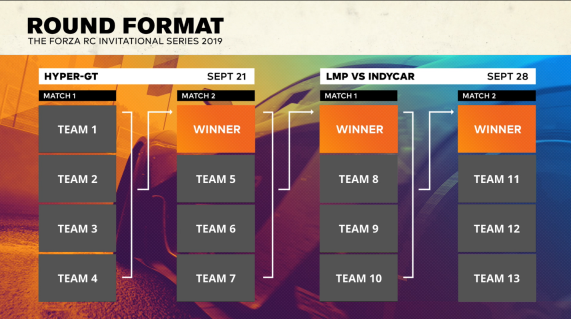 Let’s look at Round 1 of competition:

For this season, racing will be multiclass, meaning a mix of cars in each race, which teams must build within the week between shows, with one car from every division represented by each team.

In week 1, every team must have a car from the ForzaGT, HyperCar and ExoticGT divisons.

The tracks for Week 1 are:

Week 1 will see races between: 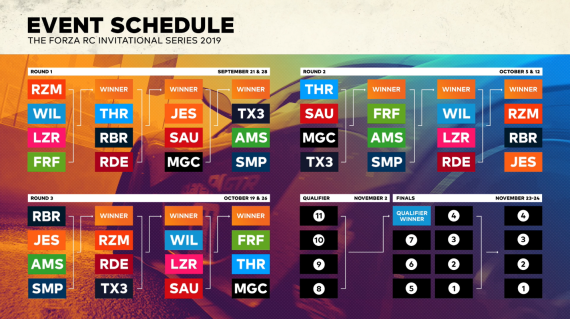 The winner of the first match will progress to the second, and so on, accumulating points as they race. Points are calculated based on finishing position, with points lost for any penalties accrued during the race. Points are cumulative across rounds, determining who makes it to the finals, and who has one last chance to qualify in the final week of online competition.

Once seven teams qualify for the finals, and an eighth team emerges from the Last Chance Qualifiers, the action moves to our live Finals hosted in Burbank, California.

There’s a lot of new stuff in this season, which guarantees it will be unlike any other ForzaRC in history, and an esports competition that raises the bar for competitive racing.

Will the heavy hitters dominate, or will smaller teams better navigate the new format?

Will drivers and coaches be able to cooperate, or will solo driving instincts kick in?

Who will excel in building cars to spec, and who will struggle to get it just right?

We can’t wait for this season to begin. We’re unbelievably excited to see how this Series plays out. And we hope that you’ll join us for every minute of the action, starting at 10 a.m. PDT on Sept. 21 at mixer.com/forza and twitch.tv/forza.