The 7 Things We Learned While Playing The Outer Worlds | Blogdot.tv

When it was announced late last year, Obsidian Entertainment’s The Outer Worlds made an immediate splash. After all, what’s not to love about a role playing game made by one of the industry’s most beloved developers, particularly one that allows them to flex their narrative chops and combine their love of biting wit with deep character building elements and top-notch combat? The Outer Worlds truly looked like the next evolution from the work they did on titles like Fallout: New Vegas.

That’s a big part of why I was so excited to spend a few hours playing The Outer Worlds at a recent event. Not only did I come away impressed by what a polished experience it already is, but I also learned a lot more about what’s shaping up to be one of the most exciting games of 2019.

The Story So Far

The Outer Worlds casts you as an unnamed hero who’s been adrift in space for over 70 years. Perhaps not surprisingly, that wasn’t planned. You were originally sent out to help colonize the galaxy in the name of a corporation, but a technical error resulted in you drifting through nothingness instead. Since my hands-on time with the game took place somewhere in the middle of it, I’m not exactly sure how you end up on the Halcyon colony where most of the game takes place, but it seems pretty clear that there’s quite a story behind it.

As with any RPG, it pays to figure out what type of character you want to play when you’re starting out. For the most part, The Outer Worlds has three different types of character builds: Stealth, Combat, and Dialogue. Stealth characters are best if you prefer to avoid battling it out, Combat-centric characters are great if you prefer to let your guns do the talking, and Dialogue builds are perfect if you want your talking to do… the talking. 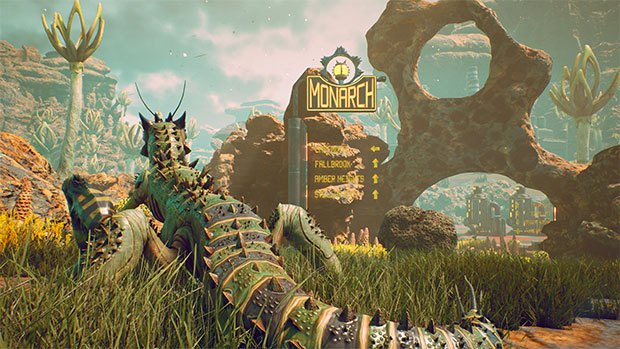 One of the first things I noticed in my time with The Outer Worlds was the fact that it’s legitimately funny. The game has a notably sardonic wit that has corporate life squarely in its crosshairs. From the dialogue to the posters and in-game collectables spread about, there are bunch of opportunities to poke fun at the world around us. It might be a bit much to say a AAA game like this has a subversive streak, but there are a number of jokes that could best be described as anti-capitalist. As the game told me at one point, “Work diligently, improve yourself, and you too can achieve middle management!”

Got the Time Tickin’ in My Head

One of the most interesting elements of The Outer Worlds is what the developers have dubbed the “Tactical Time Dilation” system, or TTD. In the game’s mythology, this is the result of the decades you spent in cryosleep, and it allows you to slow combat down to a crawl with just a press of the left bumper. This brings up a gauge that will very slowly tick down if you’re standing still or burn down faster when you move or attack. Similar to Fallout’s VATS system, it’s really helpful for those who prefer slower-paced RPGs to twitch shooters or who just want a leg up in combat. I found it was absolutely lethal when paired with a sniper rifle.

Like many RPGs, The Outer Worlds allows you to build a party of sorts, bringing up to two companions with you as your traverse the world. During my time with the game, I had two badass women by my side, both of whom joined me after accepting missions. You can give your companions orders during combat, allowing you to position them for maximum efficiency. You can also direct them to use their abilities, in which they’ll use a devastating attack on whichever enemy you target. One of my companions opened fire with a Gatling-style energy gun, while the other smashed enemies with a giant hammer with shock damage. They’ve even got Skills that can enhance your Skills! According to the developers, you’ll add companions as you go, allowing you to swap them out depending on the situation you’re facing. 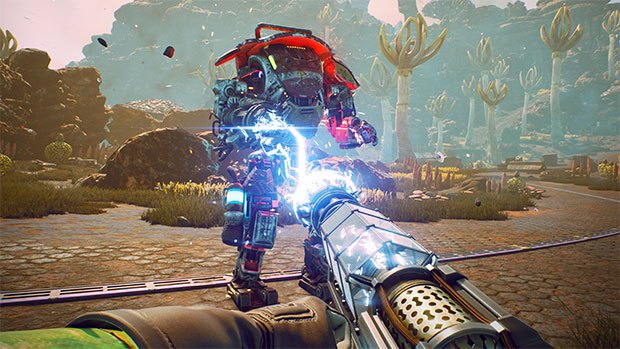 The Choice is Yours

As I mentioned above, The Outer Worlds offers players a number of different ways to play, as well as presents them with plenty of tough choices to make throughout the game. For instance, in one mission I was tasked by one of the game’s clans with infiltrating a captured area to return some supplies that were taken from them. While I could have gone in guns a-blazing or attempted to sneak in the backdoor, since there were over 10 enemies I decided to take a more tactful approach. I walked right on up to the gang’s leader and told him I was there to spray for vermin that had infested the area. After he and his whole gang hightailed it out of there and I got the supplies, I was faced with another choice: get data cartridges for the faction leader or get extra food and meds for his lieutenant to help the rest of the factions.

Skills to Pay the Bills

Don’t think there’s enough choices to make yet? Wait until you hear about all of the Skills and Perks you’ll be able to choose from. You’ll sink Skill points into 7 different areas: Melee (one- and two-handed), Ranged (handguns, long guns, and heavy guns), Defense (dodge and block), Dialogue (persuade, lie, and intimidate), Stealth (sneak, hack, and lockpick), Tech (medical, science, and engineering), and Leadership (inspiration and determination). Each of these seven base Skills unlock more options as you hit five different thresholds from Novice to Master. Got all that? Good, because now you need to think about your Perks, which include things like Slow the World (+25% Tactical Time Dilation), Cheetah (20% Sprint Speed), and Toughness (+50% health) amongst others.

With its unique blend of biting humor, deep RPG elements, and smooth combat, The Outer Worlds is already shaping up to be one of the most exciting and interesting role-playing games of this generation. My time with the game only made me want to play more, and it’s already got me clearing my calendar for October 25, 2019.

Related:
The Bard’s Tale Trilogy and Wasteland Remasters Coming Soon to Xbox Game Pass
The Bard’s Tale IV: Director’s Cut Arrives Digitally on August 27 and at Retail on September 6
E3 2019: Lie, Sneak, and Blast Your Way to Success in The Outer Worlds