This is the first time we’ve seen a product that uses a Raspberry Pi for a tracking telescope before – or more accurately, an observation station. See, Stellina (£3,643 / $4,700) isn’t just for getting a better look at the moon or maybe seeing a planet, it’s designed to look into the deep reaches of space and bring you images of nebula and galaxies that you could never see with the naked eye. And it’s all controlled from a smartphone or tablet, which is pretty clever.

Space in your hands

Probably the most unique feature of Stellina is how it’s not only fully controlled from
your phone or tablet, but also you get to see what it’s pointing at from your device.
No need to peer through a viewfinder if that isn’t your thing, although if it is your thing
you may want to look somewhere else. 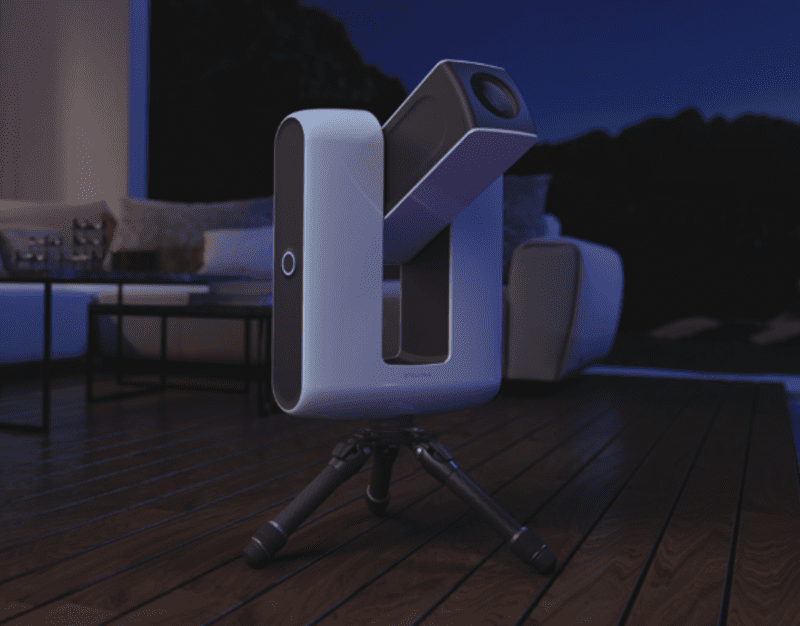 A Raspberry Pi 3 inside creates a local wireless network that works with a Stellina app for remote viewing and controlling. Because of this control, pointing at an object is incredibly simple: there’s a predetermined list of cosmic destinations you can select from in the app, and Stellina automatically swivels and raises its lens towards it before continuing to track it throughout the night if you so wish. The longer you look at these objects, the better picture you’ll get as the software ‘stacks’ the photos on top of each other to get a
clearer image. You can then do some colour correcting of the image when saving it,
or even just invert the colours for that very scientific black-on-white look.

We took a Stellina out to a field in the middle of nowhere one evening to give it a proper test and we were pleasantly surprised by the results. Despite having the various planets in our solar system selectable to observe, the real magic occurs when you get it to look at nebula and galaxies. As you might expect, the darker it is the better, and some patience is required if you want to get some truly astonishing sights. Saturn was the first and last target of the evening, with barely a blurry smudge visible just after dusk, and the rings clearly circling it several hours later. Which was quite breathtaking, even if the whirring of the motors as it tracked the
planet across the sky was a touch distracting. We feel like that this device is more aimed at folks with a balcony who’d rather be sitting inside while looking at Jupiter or Andromeda – it does claim to filter out light pollution after all. The kind of people who might have a nice balcony to put it on may also be a bit more comfortable with the hefty price tag, which runs quite a lot higher than more traditional telescope/automated tripod systems. The magic here is in the software and ease of use then, although you will be paying a premium for it – however, a much cheaper version is in the works and we’re interested to see how it compares.

9/10 While the price is eye-watering, if you really like looking at stuff in space and don’t
get out of the city much, you could have a magical time with it.