It’s been a long time coming, but today Skystone Games is extremely proud to announce that Spacelines from the Far Out is available now on Xbox consoles and Xbox Game Pass (for PC, too!).  Spacelines is a comedic co-op, rogue-lite, airline tycoon simulating, otherworldly adventure game that blends the golden era of air travel with the utopian space age of the 1960s.

It’s a lot like the Jetsons… if George, Jane, Elroy and Judy were stuck in a co-op roguelite with an amazing jazz soundtrack and tons of unlockable content.

In Spacelines from the Far Out you’ll create your own intergalactic airline, customize and upgrade your star cruiser, pick up passengers throughout the cosmos, entertain them, feed them, and keep them safe all while dodging asteroids, keeping the health inspectors off your backs, and hopefully not running out of fuel along the way…

If you crash? Well, you’ll take what you’ve earned and learned, and try again until you’ve unlocked every add-on, purchased every ship, and become the veritable kings of the interstellar highway.

Spacelines from the Far Out can be played solo or with up to four players both online and in local co-op play. And yes, it’s cross-platform between PC and Xbox!

Coffeenauts first began the project as a college assignment in their university of Sao Paolo, Brazil. It soon became clear that this little project needed the team’s full attention, and when we met the team, we knew they were onto something special and gladly jumped at the opportunity to help them make their dream game a reality.

Spacelines from the Far Out is out now on Xbox Game Pass, and we hope you’ll take to the stars with us. There may be some vomit… maybe some asteroid belts that are unavoidable, but there’ll also be fame, fortune, and fun for you and your spaceliner friends. Take your first flight on the friendly galactic skies… today! 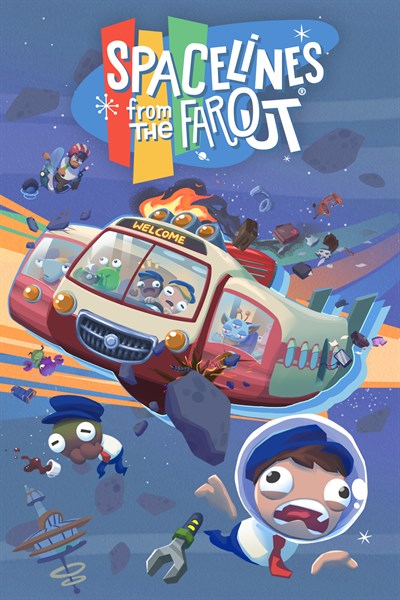 Spacelines from the Far Out

☆☆☆☆☆ 21
★★★★★
$14.99
Get it now
PC Game Pass
Xbox Game Pass
CO-OP RETRO-FUTURISTIC SPACE AIRLINES
Spacelines from the Far Out is a ‘roguelike-like’ co-op management game about airlines in space, featuring unlockable spaceships, upgrades, characters and customizations, randomly-generated challenges, trips and itineraries, with a generous serving of 60s space-age flair and jazz! A PROCEDURALLY-GENERATED SPACE TRIP
Never fly the same trip twice with our mighty Trip Generator, a system that constructs fresh compaigns with unique sets of routes, destinations, space hazards, ship emergencies and passenger events. Alongside it, our game-balancing system Game Director AI monitors players' progress and performance through trips and dynamically controls game events in real time, allowing for a seamless transition from single to multiplayer! A COSMIC HANDFUL OF NEEDY PASSENGERS
Each of your passengers are independent AI entities with their own needs and behaviors, dynamically responding to their environment and players' actions. Be advised: if they don't approve of your service, you may get a visit from the dreaded Inspector, who will look for health and safety violations and shut your spaceline down! BUILD THE PERFECT STARLINER
From helm to engines, each of your ship's 15 different systems can be upgraded to create the perfect space ride. With tons of unlockable ships, you will be able to expand and create your own luxury star fleet! YOUR VERY OWN CUSTOMIZED SPACELINE
By successfully completing flights, you will find lost parcels containing tons of unlockables for your company: from spaceline customizations such as logos and color schemes, to skins for your ships and new species of playable characters!