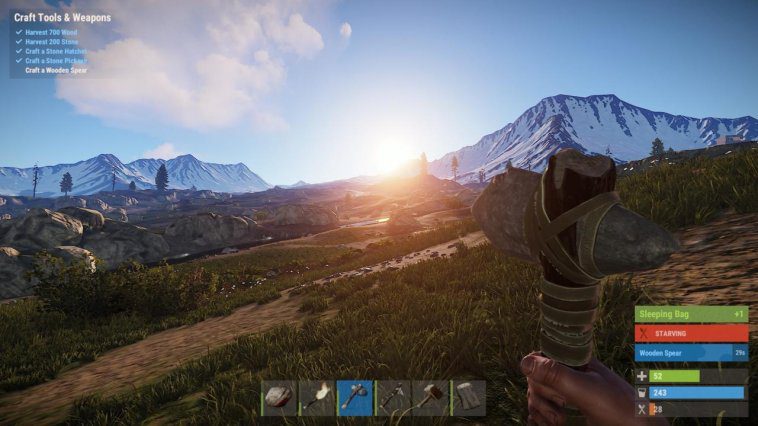 It’s hard not to have your interest piqued by Rust. Few other games strive to make you feel as helpless, vulnerable, and lost as its startling opening and outwardly confusing mechanics do. Rust wants you to think it’s about survival, but it never uses the tools at its disposal to realize that. Instead it becomes a playground limited not by your understanding of its inner workings, but instead by how much time you want to spend slogging away at its tedium.

Starting stark naked on a beach with nothing more than a rock and torch on your person, Rust doesn’t waste time letting you know that you’re in danger. Health, hydration, and hunger bars make it immediately clear that your time on its massive island is borrowed. Without food and water (and later shelter, light, and warmth), you can slowly watch your life seep away with every passing minute. Rust attempts to guide new players with an often less-than-helpful tutorial to keep you alive longer than a handful of minutes, but it does nothing to prepare you for the real dangers its world holds.

Rust’s facade is its survival mechanics, and its menagerie of crafting options and resources for you to gather up keep the illusion alive at first. You can use your otherwise useless rock to chop down trees or hammer away at different types of ore, and eventually you might gather enough to make a hatchet or pickaxe to increase your bountiful gains and speed up the process. This process quickly ramps up into more meaningful items, with the allure of modern weapons and robust armor only at the tip of the proverbial iceberg.

It’s a nightmare of menus and item wheels that really slow things down to a halt. Rust might be out of Early Access, but it has so many elements that indicate otherwise. You can easily search for a building foundation in one menu, watch its building timer somewhere else on the screen, and then have it pop into your inventory, which is an entirely different menu at this point. Equip it and you have a relatively flat surface in front of you (Rust absolutely doesn’t like any gradient variations and refuses to allow you to place items on them), and you’re good to go. But what about moving it? You’ll need an entirely separate tool for that, as well as another trip into a separate equipment wheel with options to rotate, move or otherwise dismantle one of your creations.

The cycle of gathering, crafting, and building up something to be proud of never feels rewarding. Rust doesn’t have the tools you need to be creative, nor does it care about practicality when it comes to redesigning a small dwelling you might have crafted for that first chilly night out in the wilderness. Teases meant to entice you to brave Rust’s other dangers fall flat fast, giving you few reasons to stick around for the tedious slog of dismantling greater weapons and gear to hopefully have the means to build them down the line.

You don’t know these items exist because you see them on a list, but rather because they’re probably what’s being used to endlessly kill you. The island in Rust is inhabited by many other players, capping out at 250 per server. And despite only being alive for a few minutes and having nothing really of worth on your person, they will (often) waste no time in showing you how far down the food chain you really are.

In this way, Rust’s true enemy shows its face: its other players. That’s somewhat fascinating to ponder on for a moment. Rust has been the subject of many a think piece during its long time in Early Access, often centering around discussions of human nature and the tendencies towards violence when other options clearly present themselves. But while that makes for a neat article to read or interesting mechanic to discuss, it detracts from another vital part of the game: what it feels like to play.

Playing Rust is a frustrating experience even with a friend or two in tow and feels downright impossible to go at alone. Wandering players will attack you at a moment’s notice, with their time spent in the server used to build up an arsenal that no amount of skilled play can overcome. Rust’s ceiling has nothing to do with how well you understand its survival mechanics or get to grips with its clunky movement and cumbersome first-person action. It’s a game that rewards those who put the most time into it first: giving them the boots to step on the ants that are any other players that might dare join after a server wipe.

Design is partly to blame for this, with Rust’s server wipes a clear indicator of how little depth its survival elements hold. Some servers might routinely reset after a week of play, while all are forced to this measure within a month. The idea is to re-level the playing field–just a day or two into a fresh server is enough for towering fortresses and high-level weaponry to be crafted by those incredibly dedicated few–so that the process can start again. This wouldn’t need to be a feature if Rust had any semblance of balance to it. But because time is the only commodity it rewards, it pushes itself into a corner where this is the only viable solution.

Without a skill ceiling of any kind, Rust demands that you dedicate every waking moment you have to it if you’re planning to have any sort of fun. Logging off leaves you vulnerable to attack from other players, while your shelters slowly decay should you not top them up with the right resources. And a momentary slip up means certain doom. Death means your corpse and anything you’ve gathered to that point is ripe for pillaging, leaving you to respawn on that same beach with just a rock, a torch, and questions about what you’ve actually achieved.

Rust’s community might sometimes offer glimmers of hope, but it’s fleeting. Every so often you can witness players making amicable agreements to trade or stumble upon a shop that needs to be both stocked and protected by players. I once ran into another survivor that handed me a hatchet and bandages to make my early game easier; a simple, memorable moment to dull the pain of the frequent deaths in the hours preceding it. Rust’s mixture of trigger-happy players and often toxic in-game chats make the entire experience profusely unwelcoming and unpleasant.

Technical issues only add to the unpleasantries. Rust routinely runs into periods of incredible slowdown, tearing the game from an unlocked framerate (its options menus riddled with spelling mistakes couldn’t lead me to a lock of any sort) to single digits at the most inopportune times. Animations look stiff and unnatural. Character models look ugly and dull. And both stand in stark contrast to an often-gorgeous backdrop. Rust’s island is serene and pleasant to look at, with its saturated blue skies and purple haze sunsets inviting you to take pause. There’s beauty to mask the repetitive models used for resources and the inconsistent textures, but not enough to make them truly go unnoticed.

Rust is also disappointing because of just how long it took to realize its own inescapable faults. Its lack of survival depth and inclination to only reward time served instead of clever play saps whatever life it might have had to give. Its survival systems show their age, while its community does its best to chase off those who might dare try surviving a new night on the island. Rust might make for an interesting discussion on what it brings out of its players, but it’s not one you need to experience firsthand.