Classic run-and-gun platformers are beloved for their fast-paced action and challenging gameplay, but Bite the Bullet offers a tasty twist. The developers at Mega Cat Studios designed Bite the Bullet as a run and gun and eat. In a post-apocalyptic wasteland, you play a human-ghoul hybrid that blasts and eats its way through fields of enemies.

This eating mechanic has an enormous influence over game strategy because every dietary decision influences your skill tree, weapon options, and character abilities. To add even more flavor, Mega Cat Studios included guest appearances from some of the world’s biggest competitive eaters and chefs. These culinary icons offer unique power-ups.

Game developers traditionally use food in video games as character power-ups or health elixirs. In Bite the Bullet, however, your diet influences everything. Pick from four character classes:

Character classes directly influence your abilities throughout the game. When you’re A Smorgasbord, for example, one power-up turns your enemies into explosive corpses after they die to deliver extra damage to nearby enemies.

Carbohydrates, fats, calories — they’re all important resources for building weapons. In addition to standard fare like assault rifles and rocket launchers, you can blast away at enemies with Gluten-Free Railguns, Family-Sized Shotguns, and the Critter Cannon (a bazooka that launches explosive critters).

Crafting takes place inside your stomach, which means the only way to use your new weapons is to vomit them up after you’re done modifying. Throwing up leaves you vulnerable to enemy attacks, and it also drains you of valuable resources you’ve gathered. Craft strategically!

Eating also influences your physical abilities. By eating enough of your enemies, you transform into a Zombro, a powerful version of yourself with invulnerability. Eat too much fat, and you’ll grow obese, making you slow and sluggish but also durable. By understanding how diet impacts overall gameplay, you can add Zombro, obesity, and various skill tree perks into your strategy.

Inspiration from the Culinary World

Eating is fast and aggressive, just like in professional eating competitions. Mega Cat Studios was inspired by some of the world’s best professional eaters, some of whom make an appearance in the game.

Miki Sudo won Nathan’s Famous Hot Dog Eating Contest six years in a row. She’s hidden in the game to offer you a pie shield — a swirling buffet of pie slices that protect you from enemies. Fellow athletes like LA Beast (best known for his YouTube channel where he eats things like light bulbs and cacti) and Crazy Legs (who has appeared on “The Tonight Show”) also pop in with gifts.

Mega Cat Studios has developed a unique approach to the run and gun genre. The alterations in gameplay ensure the experience feels fresh and fun while honoring run and gun classics. Play Bite the Bullet today on Xbox One! 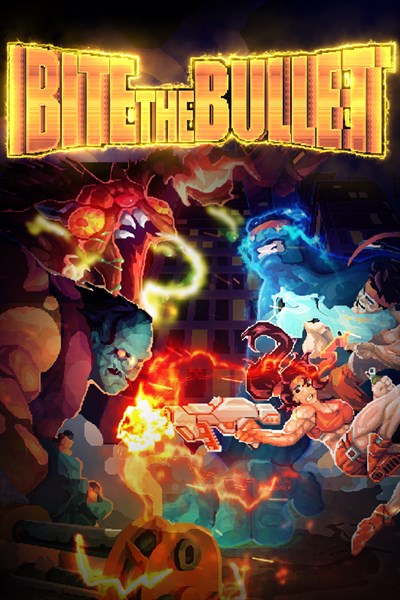 ☆☆☆☆☆ 3
★★★★★
$14.99 $11.99
Get it now
Bite The Bullet is the world’s first Run & Gun & Eat. In this roguelite RPG shooter you must eat enemies, bullets and more to powerup your character, weapons, and abilities. Gun down zombies, robots and giant mutant bosses with a barrage of bullets before chowing down on their corpses to craft new weapons, unlock new abilities and special attacks, and transform into a powerful Zombro form to smash foes. Explore four character classes and a skill tree based on your diet – and remember, you are what you eat! You Are What You Eat How you play is driven by how you choose to eat. The carnivorous Gorivore or vegan Slaughterer of the Soil that have their own unique abilities and perks, changing how you defeat enemies and navigate levels. Customize your character with every choice and every bite. Maximize your build for your playstyle, run the world again with a different diet for a new challenge, and team up with a friend in co-op to ramp up the bullets and the calories.