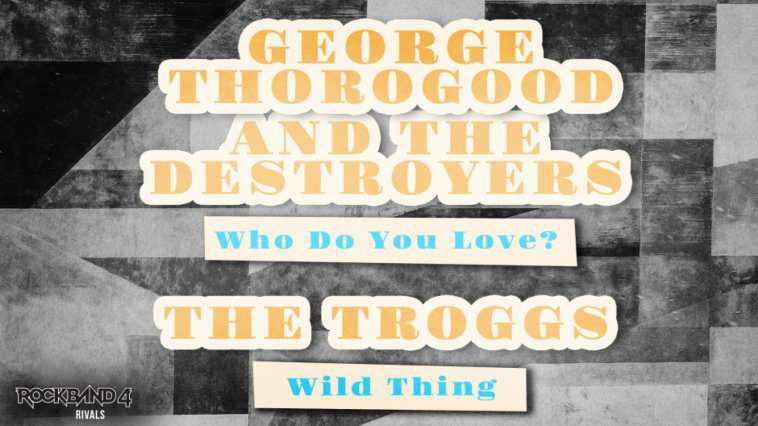 Memorial Day weekend is the perfect time for sunshine, barbeque, and classic rock! Break out your Rock Band gear for some crowd-pleasing hits from George Thorogood and the Destroyers as well as The Troggs. Coming June 3 is the start of Rock Band Rivals Season 22 with loads brand new rewards as part of the Spotlight Hero Update.

Kicking Summer Off with Some Classic Rock Hits

George Thorogood’s 1978 hit “Who Do You Love” and the Troggs 1966 “Wild Thing” are available now in the Rock Band Music Store. Rock out to these legendary tracks and get ready for the new season of Rock Band Rivals!

Starting June 3, the newest season of Rivals will be exploring the entire Rock Band back catalog through the years of the Chinese Zodiac and, as always, we’ll be dropping some great weekly DLC along the way. Unlock the first piece of the Year of the Ox outfit by competing in the weekly Rivals Challenges get climb the ranks with your Crew.

The free Spotlight Hero content update just dropped on May 19. With it came loads of new Rivals content like the Year of the Ox outfit rewards, new placement and tier badges, new menu music, loading tips and some minor bugs fixes.

We hope you enjoy all of the new Rivals rewards and we look forward to seeing you climb the leaderboards for Season 22!

☆☆☆☆☆14
★★★★★
$59.99
Get it now
The full Rock Band™ 4 experience; this bundle includes Rock Band 4 and the Rivals Expansion, giving you access to the full feature set of the best, most fully featured music game on the market today. The Rivals Bundle includes over 100 songs and a ton of features, including the following and more: -Online play: move the party online with matchmaking, public or private sessions, tools to maximize your DLC overlap and more! -Rivals mode: Band together with friends across the globe to compete in this online multiplayer stats battle. Join Crews to prove your skill and crush your rivals. -Rockudrama: An all new campaign mode telling the story of YOUR band’s triumph over adversity in the world’s first playable music documentary. -Character creator with hundreds of customization options to perfect your look -Access to future updates and songs exclusive to the Rivals community -Pick up and play with a wide variety of supported USB mics or use compatible guitar and drum controllers for the full Rock Band experience. Note: If you have Xbox 360 wireless music gaming controllers then you MUST purchase the “Rock Band 4 – Legacy Game Controller Adapter for Xbox One” (sold separately, while supplies last). This offer does NOT include music gaming controllers or a USB microphone. Use of Rock Band 4 is subject to our Privacy Policy located at www.harmonixmusic.com/privacy .

Related:
Ring in 2021 with Rock Band 4 Rivals
Fuser is the Nonstop Festival Where You and Your Friends Control the Music
Five Years of Rock Band 4 Means Free Songs for You