To use the Explorer Base, your Pico will need to have male pin headers soldered, facing downwards – if you don’t fancy doing this yourself, it’s possible to buy Pico boards with pre-soldered pins. It’s then just a case of mounting your Pico in the dual female headers; a helpful ‘landing area’ graphic on the Explorer Base indicates which way round to place it.

On the left side of the Explorer Base is a mini green breadboard with 170 points. While this may prove a little cramped for some projects, you could always just use a separate breadboard to house extra components. Note that no electronic components are supplied with the board, so it’s up to you to source your own LEDs, buttons, sensors, etc., along with the male-to-male jumper wires to connect them.

Rather than wiring components to Pico’s pins directly, a selection of its pins are broken out via two 12-pin female headers. These are clearly labelled and include I2C, SPI, ADC, and seven standard GP pins. While there are two GND connections, the only power option is 3V3, so this rules out any components requiring 5V power, such as NeoPixels. An Audio pin is connected to the on-board piezo speaker.

The remaining four breakout pins are allocated to motor connections. Making use of a DRV8833 dual H-bridge motor driver chip, these can deliver 1.5A RMS current output to control two DC motors (or other power-hungry devices such as bright LEDs) – there’s even a handy overcurrent warning LED next to them.

One of the highlights of the Explorer Base is the mini LCD screen found on its right-hand side. This 1.54-inch, 240×240 IPS display is vibrant and useful for showing data such as sensor readings, as well graphs, text, and colourful graphics. Like most of Pimoroni’s mini displays, it also features four tiny tactile buttons around the outside for user input. You could even use them to play simple games. 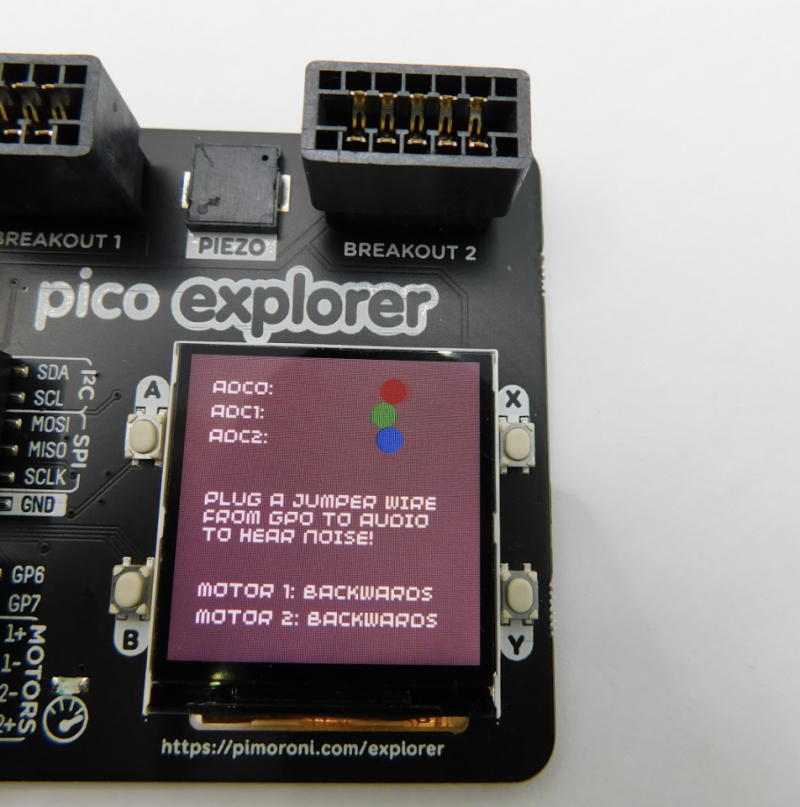 Above the screen are a couple of five-pin I2C-based breakout slots that are compatible with Pimoroni’s large range of Breakout Garden boards. Making use of them isn’t so simple, however, since the Explorer Base’s supporting software libraries – for C and MicroPython – are still very much a work in progress at the time of writing, and only include drivers for four breakouts. With a great deal of jiggery-pokery, and the help of a CircuitPython bus conversion library created by Ben Everard from our sister magazine HackSpace – we managed to get a BME680 breakout sensor working in MicroPython. Note that you’ll also need to flash Pimoroni’s custom UF2 firmware to Pico to use the Explorer Base with MicroPython.

Driving the LCD display and reading its buttons is made fairly simple by a MicroPython module. This enables you to set pixels, create filled rectangles and circles, change pen colours, and display text strings and characters (using a preset upper-case font). With a bit of effort, it’s possible to create some more advanced effects, such as lines, hollow shapes, and even scrolling text on a path – as demonstrated by Tony Goodhew in his excellent Instructable, which shows the power of the display and Pico itself.